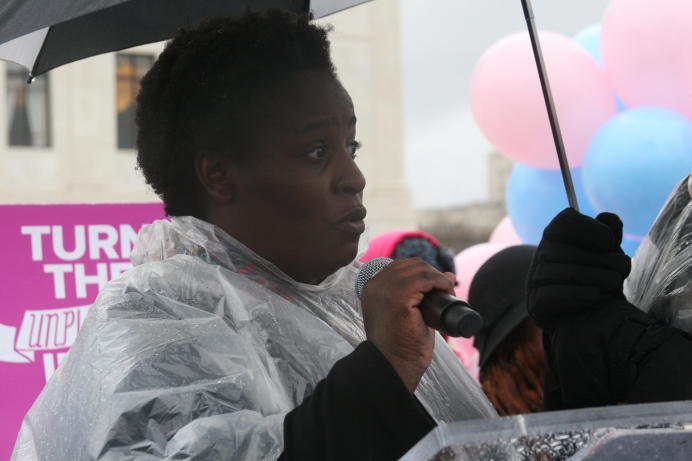 Ebony Harris shared her story at the Supreme Court during Tuesday's arguments in NIFLA v. Becerra. Photo By: Jay Hobbs

In the bustle of Tuesday’s oral arguments before the U.S. Supreme Court in National Institute of Family and Life Advocates (NIFLA) v. Becerra, it would be easy to miss Ebony Harris’ story.

At the end of the day, however, it’s women just like Harris who have the most to gain or lose, depending on what the Court decides this summer.

Harris told her story during a rally co-hosted by NIFLA and Alliance Defending Freedom (ADF), while representatives from both organizations argued that the Court should strike down a 2015 law in California as an unconstitutional infringement of First Amendment free speech rights.

Twelve years ago, Harris found herself at the crossroads of an unexpected pregnancy, fearing she would need to choose between her own success and the life of her child.

In fact, Harris was all but decided that she’d end her child’s life through abortion by the time she went into Greater Baltimore (Md.) Center for Pregnancy Concerns. By the time she left that first appointment, however, she was well on the way to choosing life for her son, Ethan.

Bragging on her son as only a mother could, Harris was quick to tell the crowd that her baby boy wrote and self-published his first of seven books (and counting) at age 7.

It was in choosing life for Ethan at the pregnancy center, Harris said, that she truly discovered life for the first time herself.

“I went into the pregnancy center because I was trying to hide what I was doing,” she said after addressing crowd of around one hundred pro-life demonstrators. “I really had to stand up. I’m grateful for my son. I love my son.”

Signed into law in 2015, California’s so-called “Reproductive FACT Act” would force 104 pro-life state-licensed medical clinics offering free ultrasound to post signage in their waiting room and disclaimers on all advertising that point clients to taxpayer-funded abortion—including a phone number to call and make an appointment.

Backed up with a $500 first-time “offense” and a $1,000 per day fine for subsequent noncompliance, the mandate also demands that over one hundred pro-life pregnancy help centers in the state that do not offer free ultrasounds post signage to that effect.

The law was authored by State Assemblyman David Chiu and passed through both houses on strictly partisan lines before being signed into law by Democratic Gov. Jerry Brown in October 2015.

The following October, the Ninth Circuit Court of Appeals—the nation’s most frequently overturned court—upheld the law, but in October of 2017, a superior court justice in the state granted a preliminary injunction in favor of one mobile ultrasound unit, The Scharpen Foundation.

Chiu was present on Tuesday, speaking at a counter-rally hosted by abortion group NARAL and Lady Parts Justice League, which was itself founded by former comedienne Lizz Winstead and has spent the past year harassing pregnancy help centers.

While Chiu, NARAL and Lady Parts Justice League spent the morning railing against pregnancy centers—which they slam by the evidence-free title of “fake clinics”—Harris told a vastly different story.

Tweet This: Why Ebony is praying for #SCOTUS to #GiveFreeSpeechLife in #NIFLA case.

Tellingly, the center Harris had visited 12 years ago—and which she says still keeps in contact with her to this day—was the named plaintiff in a case the Fourth Circuit Court of Appeals recently dismissed as driven by meritless accusations from NARAL and others.

In spite of a discovery period that lasted seven years and resulted in almost 1,300 pages of documentation, the lead justice struck down the case because NARAL could never produce even one example of a woman harmed by a pregnancy center.

Standing in the cold rain late Tuesday morning, Harris said she was hopeful the current Supreme Court case would result in a similar vindication of pregnancy help centers like those who helped her choose life for her son.

“I pray that things work out in God’s favor,” Harris said. “That’s what this is all about, is doing God’s work. I pray that justice is done. These babies need someone to speak up for them.”

The Supreme Court is expected to make a decision in the case in late June, which could affect similar local and state ordinances in San Francisco—which was also authored by Chiu—Hawaii, Illinois, Hartford (Conn.) and New York City.