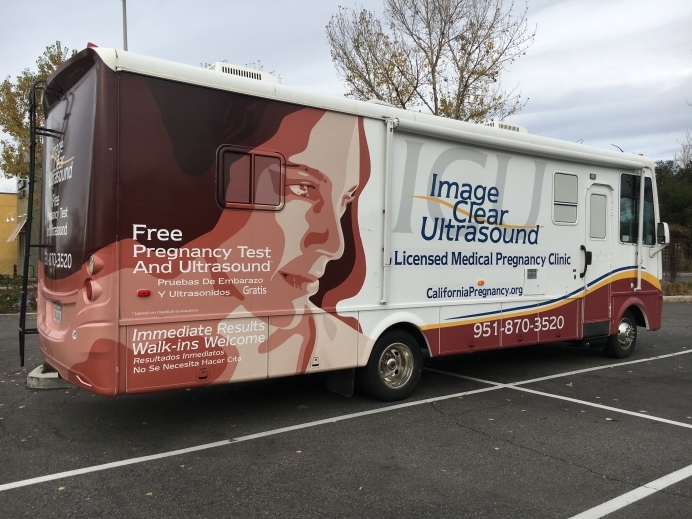 An injunction that applies to just one over 200 privately funded pregnancy centers in the state that offer free alternatives to abortion, the ruling puts a major dent in the state’s so-called “Reproductive FACT Act”—a 2015 law that mandated pro-life centers must post signage and inform clients about the state’s taxpayer-funded abortions and birth control through its Medi-Cal program.

“We are thrilled with Judge Trask’s ruling, which is a huge victory for free speech,” Scott Scharpen, the head administrator of “Go Mobile For Life,” a mobile ultrasound unit that serves women in Riverside County, said. “The whole notion of being compelled to share information with our patients about abortion availability, which is contrary to our mission and purpose, is fundamentally wrong.

“Lives will be saved because of this ruling.”

Pushed through on a purely party-line vote in 2015, the law has only been enforced in one jurisdiction—the city of Los Angeles—but has served as a template for other Democrat-controlled states—including Hawaii and Connecticut—to crack down on pro-life pregnancy centers that offer free services to expectant mothers.

Pro-life advocates, including Alliance Defending Freedom and National Institute of Family and Life Advocates (NIFLA)—who are currently waiting on the U.S. Supreme Court to take up a statewide appeal to the law—have argued since the bill’s inception in the State Assembly that it tramples on the constitutionally protected rights of free speech and free religious expression.

Prior to Monday, those arguments fell on deaf ears throughout an appeals process that including an affirmation by the Ninth Circuit Court of Appeals—the most frequently reversed court in the U.S.

Unlike the previous appeals—which appealed to the U.S. Constitution—Scharpen and his legal team of Tyler & Bursch, LLP and Advocates for Faith & Freedom had appealed to the court on the basis that the law violates California’s 1849 Declaration of Rights, which guarantees the “individual freedom of mind.”

In her ruling Monday, Trask agreed that the Reproductive FACT Act violates free speech protections, noting that, “compelled speech of a political or cultural nature is not the tool of a free government.”

Elsewhere in her decision, Trask wrote that if the state’s primary goal is to raise awareness as to the availability of its programs, it has several ways to do so, including public service announcements and even purchasing billboard space, “directly in front of Scharpen Foundation's clinic.”

None of those options involve running roughshod over the deeply held religious convictions held by Scharpen—who also serves as a pastor—who would have been forced to speak a government message that would have left “patients with the belief they were referred to an abortion provider by that clinic,” Trask explained.

“Compelled speech must be subject to reasonable limitation,” Trask wrote. “This statute compels the clinic to speak words with which it profoundly disagrees when the State has numerous alternative methods of publishing its message. In this case, however virtuous the State’s ends, they do not justify its means.”

Next Steps in the Fight

While it is expected that California’s Attorney General, Xavier Beccera, will challenge Trask’s ruling, it remains to be seen how the decision will affect pregnancy centers’ pending appeal to the Supreme Court.

Danielle White, legal counsel for Heartbeat International—a network of pregnancy help organizations, including Scharpen’s and close to 100 more in California—said the state-level ruling will likely put the pending Supreme Court challenge into a holding pattern while Beccera fights the injunction.

Similar laws forcing pregnancy centers to post signage denigrating their own services have been struck down in New York City and Baltimore, as well as Austin (TX) and Montgomery County (MD), which eventually was ordered to pay pregnancy centers $330,000 in attorney's fees.

In July, a judge in Illinois placed a statewide preliminary injunction on a 2016 law that would have forced medical professionals—including pro-life doctors, nurses and pregnancy center personnel—to refer patients to abortion businesses.

“This is such an encouraging win for free speech and for the pro-life community,” White said. “We’re praying this will be a major turning point to allow clinics like Go Mobile For Life to keep their attention on reaching women who desperately need help. Every woman should have all the information she needs to protect her child during an unexpected pregnancy, and this ruling is a great step forward to that goal.”

The fight to allow pro-life people to reach women facing an unexpected pregnancy is one Nada Higuera—who argued the case before Judge Trask—takes personally.

“As a young female and defender of speech, I am thrilled to know that our work is not in vain,” Higuera said. “I’ve regrettably had an abortion. And I’ve just recently experienced the incomparable joy of having a baby. I wish I would have had the opportunity to visit a pro-life clinic when I was just 16 years old and contemplating an abortion.”

Note: The previous version of this article stated incorrectly that the ruling applies to all 200 pregnancy help centers in California. This article has been updated accordingly.