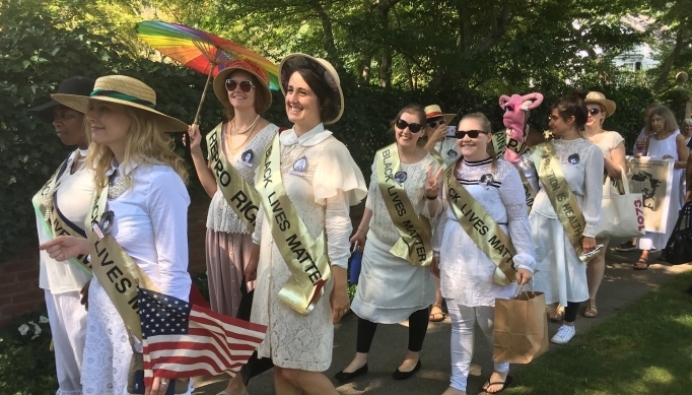 Lady Parts Justice League co-opting the suffragettes - who were all pro-life women - to protest a Long Island pregnancy center on August 24.

If there’s a far-off land where failed ideas, ungrounded accusations and malice all go to live out the rest of their days in peace, perhaps #ExposeFakeClinics will someday travel there for good.

Until then, abortion absolutists at Reproaction, Abortion Access Hackathon and Lady Parts Justice League are all-in for round two of #ExposeFakeClinics—a national campaign that aims to smear and malign pro-life pregnancy help centers and medical clinics that offer women alternatives to abortion and healing from past abortions.

Just in time for Halloween, the newest crusade is slated for Oct. 23-27, when its organizers hope to rally abortion supporters in a coordinated online and in-person attack against community-supported pregnancy centers and medical clinics who are rescuing a child from abortion every two minutes in the U.S. alone.

Calling upon supporters to “help end (the) deception” that is the pro-life pregnancy help movement, the current iteration of #ExposeFakeClinics follows the group’s initial foray into organized slander back in July. Predictably—since 99 percent of clients reported a positive experience at pregnancy centers nationally—the first campaign failed spectacularly in its stated mission.

Tweet This: How #ExposeFakeClinics is a gift to #prolife pregnancy centers. @hobbnobbin

It did, however, provide pregnancy centers a golden opportunity to showcase the results of their hands-on work to provide women and families with life-affirming options.

In the kickoff event back in July—a demonstration led by former comedienne Lizz Winstead, the co-creator of Comedy Central’s The Daily Show—abortion enthusiasts picketing Women’s Choice Network in Pittsburgh were interrupted by a young man and his 2-year-old son who had been rescued from abortion through the center’s work.

“This little guy wouldn’t be here if not for that [center], you know what I’m saying?” the man told protesters. “What’s going on here? What type of demonic stuff they got going on here. My son was almost an abortion, but we didn’t have it. He’s here right now—look at him.”

Another woman who had been a client at a pregnancy center in Minnesota said she thought the #ExposeFakeClinics campaign was a joke when she first caught wind of it, noting that she felt “empowered to make my own decision” at the pregnancy center when she was facing an unexpected pregnancy.

She’s right, of course. The #ExposeFakeClinics campaign is a joke. Its most basic premise—that pro-life pregnancy centers lie to women—is baseless slander that is disproven by every woman who reaches out to these vital community resources for help during an unexpected pregnancy.

Probably the highlight of round one came in mid-August, when Winstead led a group dressed as 19th-century suffragettes—who uniformly opposed abortion, which they called “child murder” and decried as a barrier to women’s rights—in a march outside of a life-saving pregnancy center in Long Island that serves over 300 women each month with free ultrasounds, pregnancy tests, material aid and more.

While the crusade’s on-the-ground tactics accomplished the very opposite of its intended goal, #ExposeFakeClinics also has an online component.

Given that Planned Parenthood and other abortion chains aren’t exactly known for their sparkling online reviews—“all sorts of nasty,” filthy,” “1 word: disgusting” are more like it—it makes plenty of sense for abortion enthusiasts to try and drag Planned Parenthood’s pro-life counterparts through the online mud by drumming up negative Yelp and Google reviews.

Even accounting for the occasional nasty review from a Planned Parenthood employee, former clients are the very best ambassadors for a pregnancy center, and that’s reflected in an overwhelmingly positive way online.

Here’s what one woman had to say about her experience at Valley Pregnancy Center in Pleasanton, California:

Where do I even start?

As soon as you walk into this place the vibe is nothing but peace, love and positivity! All of the women working there, ESPECIALLY  Michelle Kelly-- one of the best women in my life! I don't think she knows how much she's helped me through my worst times!

When I first came to VPC, I was about 4 months pregnant, and it was at the old location in Dublin. The greatest time of my life, was a very challenging, depressing time of my life, and boy did they all help me through it. Everywhere from emotional support, to preparing to become a new mommy! It was amazing, I felt so loved, comfortable and welcome here.

They offer all kind of support, everywhere from 1 on 1 emotional support, to providing an ultrasound. I believe most services are free but don't quote me- Check them out, again, they're amazing. I even was welcome there, and still felt very loved and comfortable post baby! Baby #2, I'll be there again!

NOT AN ABORTION CLINIC!! But they guide you through exploring all different options, per your own decisions. They NEVER make you feel any kind if pressure.

No getting around it, round two of #ExposeFakeClinics is upon us. But it’s a safe bet that the one group you’ll never find protesting pro-life pregnancy help are the very women these centers serve day in and day out. These women are too busy living life—and volunteering at the centers—to pay too much attention to the griping outside.

As with round one of #ExposeFakeClinics this summer, the joke’s on the campaign's organizers in round two. And for pregnancy centers, the opportunity is gift-wrapped and ready for the taking.