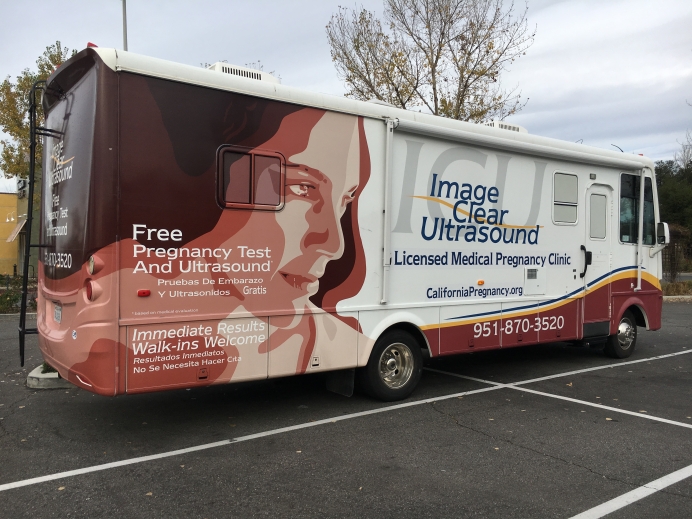 One day ahead of a crucial appearance in the Riverside County Superior Court, leaders at Go Mobile For Life (GMFL) are calling upon fellow pro-lifers and other Christians to join them in a day of prayer and fasting Tuesday, Oct. 17.

Prompting the set-aside day of prayer and fasting is GMFL’s challenge to a 2015 California state law forcing pro-life pregnancy help medical clinics to promote taxpayer-funded abortions at their own expense—a law administrator Scott Scharpen said he would sooner close his clinic over than obey.

Either outcome seems to be agreeable to the authors of the so-called “Reproductive FACT Act,” a law that passed through both houses of California’s legislature without a single Republican vote. Backed by NARAL Pro-Choice California—whose director has openly acknowledged she would crack down on pro-life free speech if given the chance—the law is based on unfounded accusations that pregnancy centers mislead, lie to and shame women facing unexpected pregnancies.

In fact, after pro-abortion groups pushed for an investigation into six Los Angeles area pregnancy centers starting in May of 2016, city officials cleared the community supported nonprofits of all accusations in January of 2017.

While pro-lifers across the state await word from the U.S. Supreme Court on their petition to have the case reviewed and eventually struck down as an unconstitutional infringement of key First Amendment rights, Scharpen’s case is unique in that it appeals to the California State Constitution’s free speech protections.

Scharpen’s appeal is also unique in that he’s gained a listening ear from a sitting judge—unlike the federal case where the law was upheld by the Ninth Circuit Court of Appeals in October of 2016.

Issuing an initial ruling that struck down California Attorney General Xavier Beccera’s request to throw the case out, Riverside County Superior Court Justice Gloria Trask blasted the law as a distortion and an interference with GMFL’s free speech rights as guaranteed in California’s 1849 Declaration of Rights.

That initial decision set the stage for Scharpen and GMFL to appear in Trask’s courtroom for oral arguments Wednesday, Oct. 18, with an expectation that Trask will issue a ruling by Nov. 21.

“We are extremely encouraged by Judge Trask’s ruling,” Scharpen said in July.  “The Judge took a very thoughtful approach in reviewing prior case precedent and clearly demonstrated that the constitutionality of AB775 fails the test of appropriate scrutiny.”

Since California adopted its law, which went into effect in January of 2016 but has only been enforced in Los Angeles, pro-abortion legislators in Hawaii introduced and the governor later enacted a copycat edict this summer. Pro-life pregnancy help centers, represented by Alliance Defending Freedom (ADF) and National Institute for Family and Life Advocates, are currently challenging that law in the courts.

In California, as in Hawaii, pregnancy centers found out of compliance could be slapped with a $500 citation for a first-time offense and a $1,000 per-offense fine for subsequent refusal to advertise abortions. Hawaii’s law also opens up noncompliant centers to individual civil suits.

The laws apply only to pro-life pregnancy centers, with no corollary of any kind for abortion clinics.

In California, the law requires state-licensed pregnancy centers—and mobile clinics such as GMFL—offering ultrasound to disseminate the following language to each client in English and all primary threshold languages—as many as 12 in some counties:

“California has public programs that provide immediate free or low-cost access to comprehensive family planning services (including all FDA-approved methods of contraception), prenatal care, and abortion for eligible women. To determine whether you qualify, contact the county social services office at [insert the telephone number].”

Meanwhile, pregnancy centers not offering free medical services such as ultrasounds must post the following disclaimer “conspicuously at the entrance to the facility” “in no less than 48-point type”:

This facility is not licensed as a medical facility by the State of California and has no licensed medical provider who provides or directly supervises the provision of services.

Two separate cases where governments have tried to enforced compelled speech on pregnancy centers on the East Coast—one in New York City and the other in Baltimore—have been ongoing since 2010, even though courts have consistently ruled that they are unconstitutional infringements.

Other cases where state and local governments have unsuccessfully attempted to force pro-lifers to speak a compelled message include Austin (TX) and Montgomery County (MD), which eventually was ordered to pay pregnancy centers $330,000 in attorney's fees.