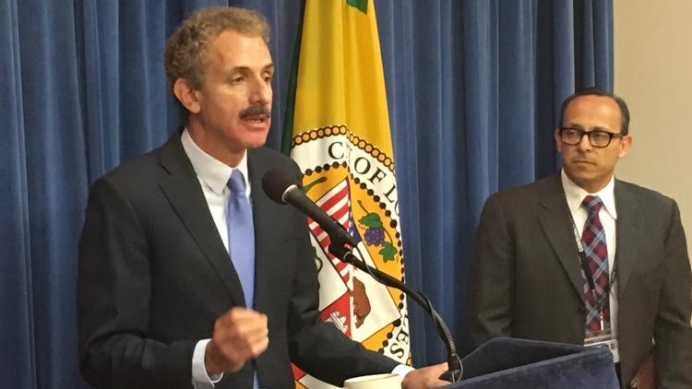 Pregnancy Counseling Center’s leaders and board of directors had drawn a line in the sand: they were not going to comply with the state of California’s 2015 edict that would force them to violate their deeply held religious convictions by participating in an abortion referral.

So, when the state’s so-called “Reproductive FACT Act” went into effect Jan. 1, 2016—mandating signage that not only tells clients about state-funded abortions through Medi-Cal, but also gives a phone number on where to get started on getting an abortion—the pro-life pregnancy medical clinic stood its ground.

Likewise, when Feuer threatened to enforce the law in a letter to the clinic on May 16, Pregnancy Counseling Center (PCC) held firm.

Same goes for July 15, when Feuer sent the clinic—which serves over 1,100 women each year across from Family Planning Associates, one of the largest abortion provider in the San Fernando Valley—a follow-up letter reiterating his intent to enforce the law, which the Democrat-controlled state legislature had established on a Big Abortion-friendly party-line vote in 2015.

Then, on Aug. 18, Feuer made his announcement: PCC would now comply with the law and begin distributing the state’s compelled signage. The state’s disclaimer is now printed in 14-point font, and in the county’s 13 threshold languages, as the law demands.

“They’re out to make an example of us,” Nancy Corbett, the clinic’s executive director, said. “They just want their foot in the door. They were testing the waters as to how much we’re willing to fight. What’s next? What’s coming down the line is my big question.”

On its surface, Corbett and PCC’s sudden compliance with the law seems quite a bit like capitulation. Pregnancy help organizations like PCC are agreed on certain tenets, like those found in Our Commitment of Care and Competence, which pro-life pregnancy help affiliation groups like Heartbeat International, Care Net and National Institute of Family and Life Advocates (NIFLA) use as affiliation standards.

One of those tenets is an agreement that such organizations, “do not offer, recommend or refer for abortions or abortifacients.” An affiliate of Heartbeat International and NIFLA, PCC was holding the line on that principle, and waiting—along with the rest of the state’s 70-plus life-affirming state-licensed medical clinics—on the ruling of the 9th U.S. Circuit Court of Appeals on a June 14 challenge to the law by Alliance Defending Freedom (ADF).

The Furor of Michael Feuer

What changed along the way was Feuer’s strategy to enforce the law. Up for re-election in a Democrat-heavy jurisdiction, Feuer had promised as early as May that his office wasn’t waiting for the court to hand down its ruling. In July, he told Rebecca Pleven of KPCC, the local NPR affiliate, “I will pursue all the remedies that I have available to me.”

Feuer’s remedy, in the end, was to enforce a law that is currently being challenged by wielding an unfair competition business practice law. Unable to turn up any sort of health code violations, Feuer scoured California's Business & Professions Code until he found an obscure and largely unenforced regulation that served to back PCC into a corner.

Had PCC and Corbett appealed to courts locally, they would have been asking for relief from justices appointed by California Gov. Jerry Brown, who signed the Reproductive FACT Act into law last October. That’s when PCC decided they had no choice but to comply.

Tweet This: It is clear that @Mike_Feuer has a pro #abortion agenda. @NIFLA @AllianceDefends #pregnancyhelp

“It is clear that Mr. Feuer has a pro-abortion agenda in his determination to try to shut down pro-life centers in his city,” Anne O’Connor, J.D., vice president of NIFLA, said. “No other city, county or even the state, has tried to enforce the FACT Act, especially in light of the constitutional litigation that is pending.

“Some might wonder why the L.A. City Attorney is not focusing his law enforcement resources on fighting real crime and abuses in Los Angeles instead of going after non-profit agencies who help his constituents in meaningful ways, and all for free.”

O’Connor, whose career in the pro-life field started as a lay counselor and later as a board member with PCC, went on to say that she is, “tremendously proud of the PCC for taking a sacrificial stand against the abusive powers of the rabidly pro-abortion City Attorney in Los Angeles.”

Serving across the street from Family Planning Associates, PCC has been actively involved in the Mission Hills community since 1972—five years after abortion was legalized in California and a year before Roe v. Wade legalized abortion on-demand in all 50 states.

Having added free ultrasound services seven years ago, and with a hope of adding free STI testing services in the near future, PCC does not receive a dime of funding from the state of California.

Corbett herself has served with the clinic for 18 years, the last 10 of which as executive director. She was out of the office Monday, Aug. 15, in fact, while her husband, Tim, was having surgery following a mild heart attack.

Corbett and her staff’s familiarity with their client-base came into play that Monday, when an undercover investigator with the Department of Consumer Affairs came in the clinic alongside another young woman. Posing as a client, the investigator said she was just there to get information about abortion.

“We knew right off the bat they were plants,” Corbett said, noting that the fact the women were looking around at the waiting room rather than their phones was an obvious tell. “They left, and my nurse, client services director and I said, ‘Boy, something’s up. They came back in 15 minutes later.”

Less than 24 hours after that visit, Corbett had received a letter from Feuer’s office, notifying her of his intent to enforce the state’s signage requirements under the California Business and Professions code.

Taking her clinic’s overarching goal to offer life-affirming alternatives to abortion, Corbett got to work typing up the disclaimer in all 13 threshold languages of Los Angeles County.

“Someone said to me, through all this, ‘It’s not a justice system, it’s a legal system,’” Corbett said.

Tweet This: "It's not a justice system, it's a legal system." #prolife #pregnancyhelp @AllianceDefends @NIFLA

With so much of her roots tied to PCC, O’Connor was intent on shedding light on the heat Feuer’s office was putting on the clinic to make sure other pro-lifers were aware of both sides of the equation.

“Perhaps another day is coming when we will have to take a bolder stand and suffer severer consequences,” O’Connor said. “I know the PCC will be ready for that day if it becomes necessary because they are passionate servants of a mighty God. The City Attorney may have won for now, but nothing will stop the PCC from serving women and saving lives.”