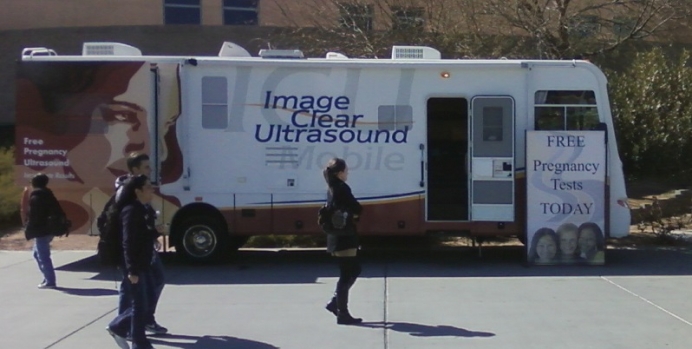 Scheduled to go into effect Jan. 1, California's attempt to force life-affirming pregnancy centers to post signage advertising for state-sponsored abortion has drawn another opponent, with ICU Mobile Riverside County filing suit to stop the law from taking effect, according to a press release Monday evening.

Publicly known as Go Mobile For Life, the mobile ultrasound unit is a state-licensed clinic operated through The Sharpen Foundation, which is overseen by a volunteer pastor from Murietta in southern Riverside County.

The pastor, Scott Scharpen, joined with fellow pregnancy help voices in the Golden State in opposition to the bill that would require his pro-life mobile clinic to post in 22-point font information on where a woman can obtain an abortion covered by Medi-Cal, including a phone number that would connect her with a state subsidized abortion business.

"I will not post that notice in our clinic. I would rather close the clinic than post that notice," Scharpen said. "Now, by law, we are required to provide referral information to a woman for services that we find morally and ethically objectionable, namely abortion."

Scharpen's organization has filed for an injunction, as have others in the state, which would, if granted, prevent the law from being enacted at the beginning of 2016. The legal team representing Scharpen's group, Advocates for Faith & Freedom, have been granted a hearing for its motion on a preliminary injunction for Dec. 23 at the Riverside County Superior Court.

In what appears to be a unique strategy among the concurrent motions for injunctions, Advocates for Faith & Freedom are arguing that the so-called "Reproductive FACT Act" violates not only the First Amendment's guarantee of freedom of speech and exercise of religion, but more urgently, the State of California's Constitution.

"Article 1, section 2 of the California Constitution provides greater protection for free speech then (sic) does the First AmendmentRobert Tyler, general counsel for Advocates for Faith & Freedom said in the pres release. "This is why we brought this case in state court as opposed to federal court."

"Under the 'liberty of speech clause' in the California Constitution, the government has no right to compel individuals or corporations to adopt the government's view on abortion and has no right to compel them to advertise and promote abortions."
Pro-life opponents to the law have focused their arguments on its inherent violation of free speech protections since it was first introduced at committee in the state's lower house in late April. The state director for the bill's major sponsor, NARAL Pro-Choice California, told The Sacramento Bee that if the Constitution allowed them to regulate pregnancy centers' free speech more directly, they would. Meanwhile, the current indirect approach to infringing upon free speech would have to do.
Previous attempts by municipalities to force pregnancy help organizations to post government-sponsored signage declaring what they do not do have failed in Baltimore (MD), Montgomery County (MD), Austin (TX), Washington state and New York City.
Tagged under
Tweet