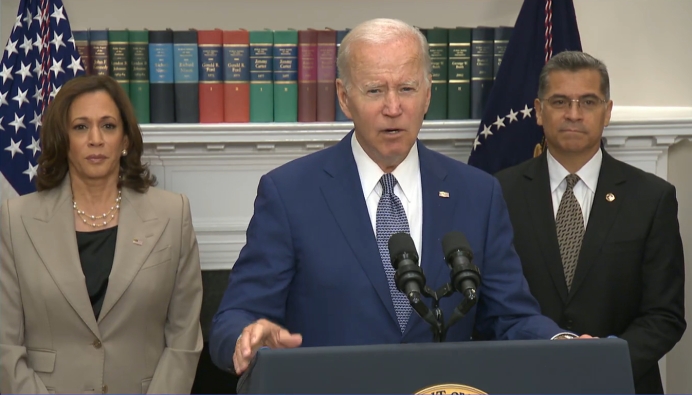 President Joe Biden signed an executive Friday order to bolster abortion access, in particular chemical abortion, in response to the June 24 Supreme Court Dobbs decision. Bypassing the judicial and legislative branches of federal government to direct different offices to collaborate in the effort, Biden’s order touts restoration of "the protections of Roe as federal law.”

In both the order and remarks prior to its signing Biden parroted abortion narratives of abortion as healthcare and a constitutional right, he perpetuated pro-abortion fearmongering that women’s health and lives are at risk because of the Dobbs ruling, and roundly criticized the Supreme Court and justices who voted in the Dobbs majority.

It also intends to foster out-of-state travel and provision of abortion.

One of the myths surround the reversal of Roe is that it criminalizes abortion, when it simply puts the matter of abortion law back with the states, where it was prior to Roe, and where individual citizens can have their say and vote on the issue.

A draft of the majority opinion in Dobbs was leaked May 2, touching off pro-abortion violence, vandalism, threats, cyberattacks and other harassment of pregnancy help organizations, churches and other pro-life organizations nationwide.

Abortion supporters showed up to intimidate Supreme Court justices at their homes as well, a violation of federal law, and amid this there was even a thwarted assassination attempt that had been directed at Justice Brett Kavanaugh.

Pro-life advocates celebrate the Dobbs ruling and have called for the federal government to address the widespread pro-abortion aggression.

Since long before Dobbs abortion proponents have asserted that pregnancy help organizations mislead women who come to them for care, but these claims and others that pro-life organizations misuse clients’ personal information have ramped up following the Dobbs decision, promulgated by a willing media.

Both types of claims have typically put forth minus substantiation.

“And now the White House, the seat of the Executive Branch of the United States, is in the abortion business,” said Jor-El Godsey, president of Heartbeat International.

“How else would you describe a White House website, ReproductiveRights.gov, that directs you to AbortionFinder.org?” Godsey asked, noting the Biden administration’s new website pointing Americans to abortion and contraception.

“This White House is clearly just a pawn of Big Abortion and its predatory profiteering,” he said.

Tweet This: “And now the White House, the seat of the Executive Branch of the United States, is in the abortion business”

Heartbeat International is the largest network of pregnancy help is the U.S. and the world, with nearly 2,000 affiliated pregnancy help locations in the U.S.

Heartbeat’s Director of Medical Impact said as well that Biden was putting the abortion industry before American women.

“Caving to political pressures, our president continues to sacrifice America's children and women,” Christa Brown said. “Just as Big Abortion ignores the wellbeing of those in need of support and real healthcare, Biden has ignored the ongoing abortion safety concerns for women and has instead reflected Big Abortion's rhetoric nearly verbatim.”

Brown said the administration’s efforts to promote abortion only serve to push the procedure on women.

“When women face the challenges of an unexpected pregnancy, they deserve better than dangerous drugs and the pressures of abortion providers and proponents,” she said. “Women are often seeking accurate information, resources, and authentic healthcare, not a way to end the life of their children.”

“This executive order fails to see or support the true needs of the families of our country and instead bows to an industry that profits from his executive order while greatly devaluing those that we should protect the most,” Brown said.

Biden called the Dobbs decision, “extreme,” “terrible, and “totally wrongheaded,” in his remarks Friday. He claimed that “the court in its allies are committed to moving America backwards.”

He assumed the abortion lobby’s alarmism tactics via claims in his remarks that states enacting abortion restrictions after Dobbs were “putting women's lives at risk” and that these laws “will cost lives.”

Largescale falsehoods have been posted in news and social media that women experiencing ectopic pregnancy or miscarriage would be denied care due to Dobbs, or that women could be arrested for seeking caer related to those conditions or for procuring abortion.

Biden disputed the Dobbs ruling’s constitutionality, claiming that it “wasn't about the constitution or the law,” rather, “a deep, long-seething antipathy toward Roe,” citing the dissenting justices.

“We cannot allow an out-of-control Supreme Court working in conjunction with extremist elements of the Republican party to take away freedoms and our personal autonomy,” Biden said.

Though it would take Congress to codify abortion law at the federal level, he pledged action to “restore Roe.”

“The fastest way to restore Roe is to pass a national law codifying Roe,” Biden said, “which I will sign immediately upon its passage.”

“The SCOTUS has correctly decided that any so-called right to an abortion is not a right enumerated in the Constitution, and is thus returned to the individual states,” Boles said. “As such, any effort by executive order to force any aspect of this issue into any of the states is a subversion of the democratic process protected by the Constitution and is likely a violation of the Tenth Amendment’s protections of the states’ sovereignty.”

“Furthermore,” he added, “an effort to promote distant travel for women to obtain abortion remote from where they live places them in danger from the complications that can occur with legal abortion in a setting where they are post-abortively distant from the abortion provider.”

Tweet This: Any effort by executive order to force abortion into any of the states subverts the democratic process protected by the Constitution

The Biden administration had permanently rescinded the longstanding federal safety protocol requiring that chemical abortion drugs be administered in person in December 2021.

And HHS Secretary Xavier Becerra had vowed earlier in the week to increase access to chemical abortion following the Dobbs ruling, calling the Supreme Court’s decision in Dobbs “despicable.”

Part of the collaboration between agencies will entail the Federal Trade Commission (FTC) “taking steps to protect consumers’ privacy when seeking information about and provision” of abortion. The FTC will also work with HHS and the attorney general “to consider options to address deceptive or fraudulent practices, including online, and protect access to accurate information.”

Amid the ongoing widespread pro-abortion violence directed at pregnancy help organizations since the Dobbs draft leak in May, Biden’s order inexplicably claimed a “heightened risk related to seeking and providing” abortion, and pledged safety and security for entities “providing, dispensing, or delivering” abortion.

Well before Dobbs Biden had said outright that his administration is “deeply committed” to defending abortion.

Four months into his presidency in May of last year, Biden had already directed almost 20 times as much in taxpayer funds to the abortion industry as Barack Obama had at that point in his presidency.

In January of this year the Biden administration launched a task force to ‘protect and bolster’ abortion.

Brown said the president’s fervent abortion support is an affront to women, stating, “Biden's assumption that abortion is the only answer to an unexpected pregnancy is insulting to women everywhere who have overcome difficult circumstances, completed education and careers goals, and found the many rewards of being a mother, all without the need for abortion.”