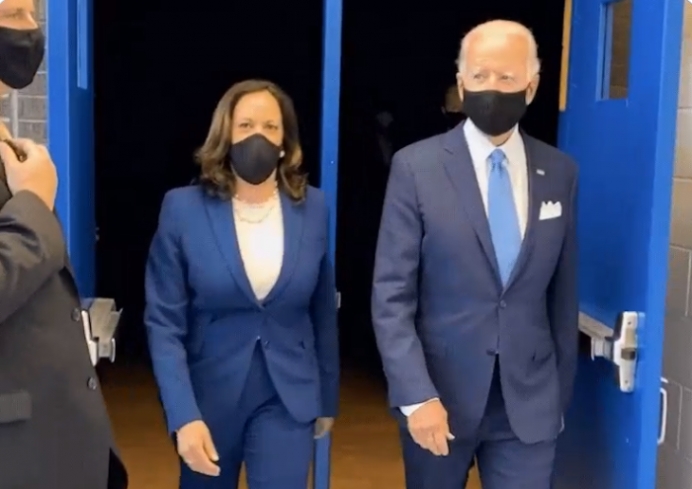 Biden and Harris comprise the most pro-abortion presidential ticket in American history, pro-life groups are saying, as they use the term extremism to describe her stance on abortion.

Biden’s support for abortion is well-documented, albeit having done a U-turn in some areas. He supports abortion on demand, opposed the Pain-Capable Unborn Child Protection Act, supports taxpayer funding of abortion and has pledged to nominate judges that support abortion.

Biden, a professed Catholic, said last month that if elected he would revoke the exemption for the Little Sisters of the Poor to the Obamacare contraception mandate, putting the international congregation of Catholic women religious who serve the elderly poor in more than 30 countries worldwide back in the position of being compelled to provide contraception, sterilizations, and abortifacients through employee health coverage.

Harris is known in the pro-life advocacy community, but awareness of her staunch abortion support outside the movement may still be emerging.

The junior United States senator from California since 2017, the former California attorney general, 2020 presidential candidate and district attorney gets 100% from NARAL for her pro-abortion voting record.

As a U.S. senator Harris voted against a bill in 2017 that would ban abortions after the first 20 weeks of pregnancy, and she voted in 2019 against protections for babies born alive after botched abortions.

She supports taxpayer funded abortion, repeal of the Hyde Amendment, and opposes parental notification for abortions performed on minors.

Harris was on the front line of the Democrats’ offensive against Supreme Court nominee Brett Kavanagh in 2018, earning a false rating from Politifact after a tweet she posted used a misleadingly-edited video to bolster the claim that then Supreme Court nominee Kavanaugh had called birth control “abortion-inducing drugs.”

In 2018, when assessing the nomination of Brian Buescher for district judge in Nebraska, Harris drew charges of anti-Catholic bigotry and religious discrimination by inferred in her questioning of Buescher that his membership in the Knights of Columbus, a charitable Catholic fraternal organization that has performed philanthropy benefiting countless pro-life and other organizations for more than a century, made him unfit to serve as a judge — because the Knights “opposed a woman’s right to choose.”

As a presidential candidate Harris went as far as proposing a new “plan” to compel states and municipalities to obtain “preclearance” from the U.S. Department of Justice before implementing any limits or “restrictions” on abortion, The Federalist reports.

Also while running for president, a Daily Caller report said, Harris pledged to codify Roe v. Wade, use support for Roe as a litmus test for judicial nominees, repeal the Hyde Amendment, require private insurers to cover abortion and contraception, make abortion drugs and birth control available over the counter, ban abstinence-only sex ed, preserve Planned Parenthood funding and more. Harris said too that she would not consider a running mate who opposed abortion.

After a Democratic presidential candidate debate last September, Harris criticized ABC panelists for not questioning candidates about abortion, according to the Catholic League for Religious and Civil Rights.

Vice President Mike Pence welcomed Harris to the race Tuesday during a speech in Arizona, adding that Biden’s choice of her as his running mate was “no surprise,” the Daily Caller also reported, considering Biden’s and the Democratic Party’s  promise of “abortion on demand.”

Harris’s zealous backing for abortion is effectively demonstrated by two of her acts as California attorney general.

Harris’s office initiated prosecution of David Daleiden, project lead for the Center for Medical Progress (CMP), the group that released a series of videos beginning in 2015 exposing Planned Parenthood for harvesting and selling the body parts of babies aborted at its facilities.

Pro-life groups made charges of conflict of interest and abuse of power against Harris when as California's AG and a candidate for the U.S. Senate in April 2016 Harris’s agents raided Daleiden's Orange County apartment, seizing his personal laptop and multiple hard drives.

Then U.S. Senate candidate Harris is reported to have met secretly in person with Planned Parenthood executives in Los Angeles, including witnesses in her investigation of Daleiden and the CMP, two weeks prior to the California Department of Justice’s raid on Daleiden’s home.

Planned Parenthood had donated thousands to Harris’s campaign for the California AG seat, and Harris was promoting a petition to defend the abortion giant on her Senate campaign website.

Further in terms of implications for pregnancy help organizations, Harris, along with NARAL’s California faction, was the original sponsor of the so-called Reproductive FACT Act, the notorious 2015 law compelling California pro-life pregnancy centers and medical clinics to promote and refer for abortions.

In NIFLA v. Becerra as it has famously become known, the law was overturned by the Supreme Court in 2018. NIFLA v. Becerra named current California Attorney Xavier Beccera, Harris’s successor who picked up the reins in the case after taking office.

The SCOTUS ruling was a landmark victory for pro-life pregnancy help centers and freedom of speech, but importantly, before it was NIFLA v. Becerra it was NIFLA v. Harris.