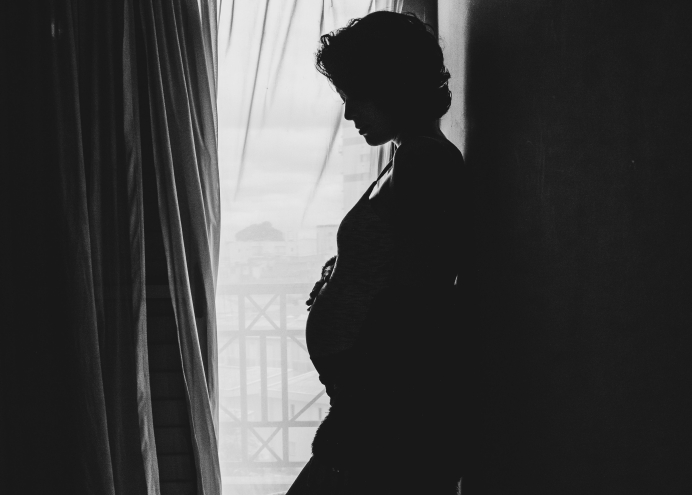 Clearing up confusion about ectopic pregnancy and abortion

(Human Defense Initiative) Ever since the Supreme Court overruled Roe v. Wade with the Dobbs v. Jackson Women’s Health Organization there has been a lot of confusion over what exactly this will mean for the future.

“As national and state pro-life organizations, representing tens of millions of pro-life men, women, and children across the country, let us be clear: We state unequivocally that any measure seeking to criminalize or punish women is not pro-life and we stand firmly opposed to such efforts.”

“Contrary to the pervasive myth that women were prosecuted for abortion before Roe, consistent state abortion policy for a century before Roe was not to prosecute women. Abortionists were the exclusive target of the law. That was based on three policy judgments: the point of abortion law is effective enforcement against abortionists, the woman is the second victim of abortion, and prosecuting women is counterproductive to the goal of effective enforcement of the law against abortionists.”

There have been viral posts on social media telling horrific worst-case scenario stories that are extremely hard to believe. One story, in particular, is saying that doctors are letting mothers with ectopic pregnancies bleed out for 9 hours, refusing to help them until they can talk to a lawyer about whether they can legally save their life or not. Tragic and horrifying, but there is nothing to even remotely indicate that situations like that would occur. Furthermore, the person who the story originated with is self-described as “pro-abortion” believing that there needs to be more abortions in order to save the planet. Attempts have been made, while writing this article, to reach out to several supposed originators of similar posts, but there has been no response.

What is an ectopic pregnancy?

According to the American College of Obstetricians and Gynecologists,

“An ectopic pregnancy occurs when a fertilized egg grows outside of the uterus. Almost all ectopic pregnancies—more than 90%—occur in a fallopian tube. As the pregnancy grows, it can cause the tube to burst (rupture). A rupture can cause major internal bleeding. This can be a life-threatening emergency that needs immediate surgery.”

These situations are rare, and in the United States, less than 2% of all pregnancies are ectopic.

We know for a fact that by the time an ectopic pregnancy occurs, a new human being has already come into existence. Scientifically speaking it isn’t a fertilized egg because the egg and the sperm both cease to exist when fertilization occurs and what is in their place is a new unique living human being at the earliest stage of its existence.

This pre-born child either implants in the Fallopian tubes or somewhere else in the body besides the uterus. If they continue to grow, they will endanger themselves and their mother. These cases, if not treated, can lead to the mother dying. In most of these emergency situations, the embryo has already died, but even if the embryo is still alive, it is currently medically impossible to save the life of the child, so there is no hope for the child’s survival. The priority is to save the life of the mother.

Although many people use the term “abortion” to refer to any instance of removing a preborn child from the woman prematurely, medically, induced abortion and treatments for a mother with a serious health condition are considered to be different. First of all, the intentions of the doctors are very different than in elective, induced abortions…etc.it is not considered an abortion in the same way an elective abortion is considered. Not only are the procedures performed differently, the intentions of the doctors are very different than elective abortions. In an elective abortion, the abortionist’s main goal is the death of the pre-born child. In cases like ectopic pregnancy, the death of the pre-born child is an unavoidable and unintentional side effect of saving the life of the mother. Even Planned Parenthood’s own website says that treatment for ectopic pregnancies is not the same as abortions. 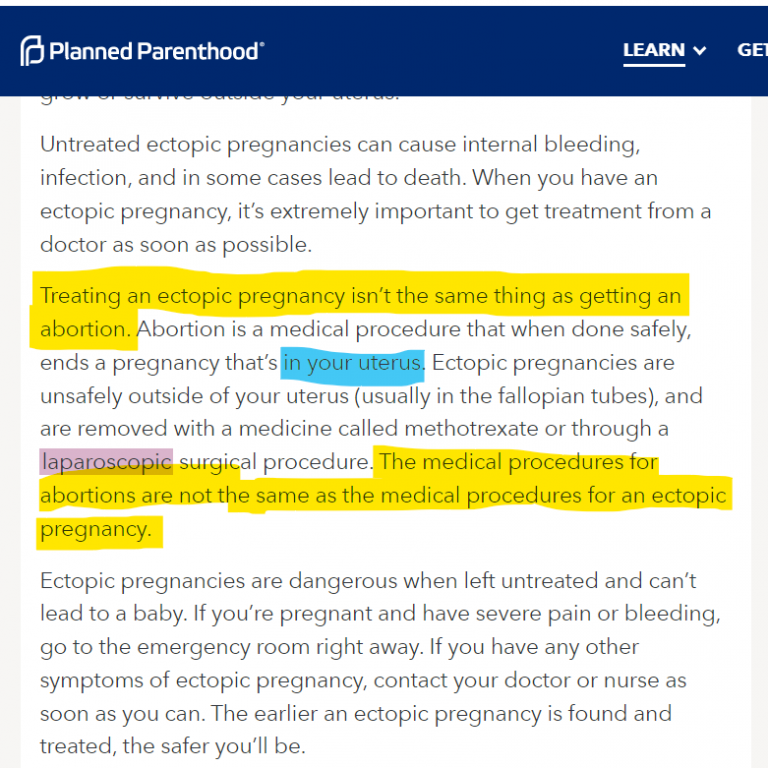 What medical professionals have to say

To help combat the misinformation, here are a number of statements from medical professionals on the confusion between elective abortion and life-saving surgeries.

In the rare but tragic situations where a pregnancy puts the mother’s life at risk, there are medical procedures for compassionately separating the mother and her baby and working to save both lives.  The only intent of an abortion is to produce a dead baby.  Women deserve to be empowered by medically-accurate information.” – Dr. Christina Francis, M.D.

“30+ years of delivering thousands of babies and I’ve never had to intentionally kill a fetus to save a mom, and never lost a mom who would have been saved by an abortion. It’s never needed to save a woman’s life, and saving women with miscarriages and ectopics also isn’t abortion.

Treatment for a miscarriage is not the same thing as an abortion. Techniques may be similar, but purpose is not. Treatment for miscarriage is needed because the baby has died but not yet been expelled. Abortion kills the baby first because he/she is unwanted [by the parents]. Facts Matter.” –Dr. Brent Boles, M.D.

“Any procedure to remove an ectopic pregnancy (pregnancy that implants anywhere other than the uterus), a missed miscarriage (when your baby’s heartbeat stops and/ or the pregnancy stops growing before a fetus is formed and your body doesn’t miscarry naturally), a molar pregnancy (an overgrowth of cells in your uterus that is not a true pregnancy) or any other NON-VIABLE pregnancy of the like are NOT abortions and are NOT illegal in states where abortions are.” – Reagan Hamm Ellis L&D BSN. RNC-OB

“Those of us who regularly treat women facing challenging and even traumatic pregnancies know that standard medical procedures are available to treat these situations without resorting to abortion.  In fact, the overwhelming majority of OB/GYNs do not perform abortions, and that’s good news for women’s health, as it is much safer for the woman to be treated in a medical setting with access to emergency care than at an abortion facility.” – Dr. Ingrid Skop, M.D.,F.A.C.O.G.

“Ectopic pregnancy and miscarriage management are no where near the same thing as elective abortions due to irresponsible sex (w/o concern for cycle or contraception – failures happen, but minor). Comparing surgical emergencies to elective procedures is deceptive and disingenuous.

That’s a false narrative that doesn’t even factor into the equation. Salpingectomies and salpingostomies to save the life of a mother in an ectopic pregnancy is not an elective abortion. When you intentionally conflate the two, you are being deceptive and frankly, lying.” – Dr. Omar L. Hamada, M.D.

“Treatment of ectopic pregnancy is not an abortion. The latter refers to an intrauterine pregnancy… I am a doctor. I care about saving lives, which is why I oppose abortion. Ectopic pregnancy has nothing to do with the abortion debate.” – Dr. Lucy Rogers, M.D.

“Treatment for ectopic pregnancy is not an abortion.” – Dr. Poppy Daniels, M.D., OB/GYN

“The American Association of Pro-Life Obstetricians recognizes the unavoidable loss of human life that occurs in an ectopic pregnancy, but does not consider treatment of ectopic pregnancy by standard surgical or medical procedures to be the moral equivalent of elective abortion, or to be the wrongful taking of human life.” – AAPLOG

“Ectopic pregnancy treatment is not the same as abortion. The medical definition of “abortion” is removal of an embryo and placenta from the uterus…Logically, treatment cannot be generalized as “abortion,” particularly because many women with ectopic pregnancies planned to conceive and wanted to carry their pregnancies to term.” – Dr. Patricia Santiago-Munoz, M.D.

What do the post-Roe laws say about ectopic pregnancies?

One of HDI’s fantastic contributing authors, Daniel Gump, has spent countless hours reading and researching almost every law in the United States pertaining to abortion going back into the 1700s. He has compiled much of his research into documents and maps that help us better understand the laws.

In his research, he looked at the laws of each state and 6 territories of the US to determine what a post-roe nation would look like.

“There have been so many claims over the past few years that US states have or will criminalize ectopic pregnancy treatment or post-miscarriage treatment.” Gump says, “Though the claims have no bearing on the truth (as neither treatment is an induced abortion), some legislation or medical billing codes have been written with confusing or dubious language.”

“Physicians do not consider treatment for ectopic pregnancies to be induced abortions. However, those outside the medical industry often conflate the two, so many state legislatures have enacted statutes to clarify that criminal abortion laws exclude such treatments. This provides more specificity than the implied inclusion in ‘medical emergency’.”

In 37 states/territories there are direct mentions in pro-life laws that exempt treatment for miscarriages from the laws and 19 without specific references.

“Since miscarriages are medically called ‘spontaneous abortions’, there is often confusion with terminology – particularly since treatment afterwards can use similar methods to induced abortions. Statutes often clarify by stating that these similar treatments are not the same as an induced abortions.”

In 52 states/territories there are direct mentions in pro-life laws that make exemptions for the life of the mother. There are 4 that make no mention of it.

“By the late 19th century induced abortions were so rarely needed to save the mothers’ lives that many medical associations declared such instances negligible. This trend continues to current times. However, should such a rare case arise, it is nearly universal for criminal abortion laws to offer exceptions when saving the mother’s lives.”

You can check out his entire list complete with links to each state’s laws here.

All of this to say, the claims that treatments for ectopic pregnancies, miscarriage, septic uteruses, and other life-saving procedures are equivalent to elective abortion are egregiously false. Equally false are the claims that those life-saving procedures will be impacted by the fall of Roe v. Wade. With all the misinformation circulating online, one would be wise to put time into researching supposed “situations” before posting or sharing online. So far all the supposed cases have been anonymous screenshots passed from person to person like a chain letter, making their reliability and authenticity difficult to determine. But what we can know for certain is that no late law calls for the criminalization of women who seek abortions, nor does any law forbid or outlaw life-saving procedures for mothers.

Tweet This: Claims that treatments for ectopic pregnancies, miscarriage, & septic uteruses are equivalent to elective abortion are egregiously false.

Editor's note: Nick Bell is a former pro-life campus leader. This article was published by Human Defense Initiative and is reprinted with permission.