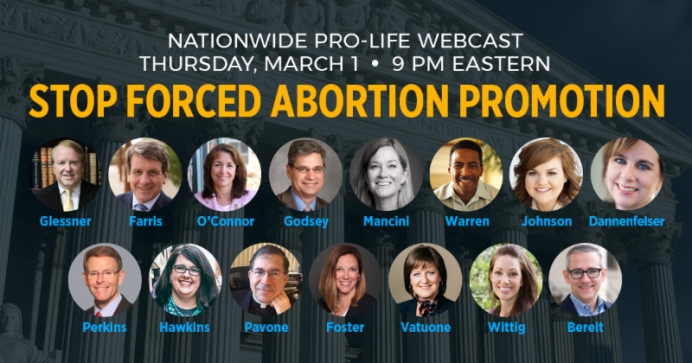 With oral arguments before the U.S. Supreme Court slated for later this month, the lead plaintiff in a fight for pro-life free speech is hosting a national webcast this Thursday, March 1, at 9 p.m. (EST).

Gathering 15 key pro-life leaders and 73 organizations, the webcast is being co-hosted by National Family and Life Advocates (NIFLA) and Alliance Defending Freedom (ADF)—which is representing NIFLA in its challenge to a 2015 state law in California that forces pro-life pregnancy medical clinics to advertise abortions.

Oral arguments in NIFLA v. Becerra are scheduled before the Supreme Court on March 20, with the outcome likely determining not just California’s law, but a spate of copycat and related mandates passed in Hawaii, Illinois, New York City, San Francisco and Hartford, Connecticut.

Pro-life advocates have seen their free speech upheld in New York City—which has revitalized its assault on pro-life speech in recent months—as well as Baltimore, where the Fourth Circuit Court of Appeals recently struck down the city’s long-standing attempt to scare women away from pro-life pregnancy centers.

The law, passed on a party-line vote by state Democrats, was upheld by the Ninth Circuit Court of Appeals in 2016, but has remained largely unenforced while pro-life pregnancy center leaders throughout the state fight it on grounds that it violates the Constitution’s guarantee of free speech by compelling them to violate conscience.

In 2017, the edict suffered its first setback when Riverside Superior Court Justice Gloria C. Trask granted a temporary injunction for one mobile ultrasound unit on grounds the law violates California’s “freedom of mind” guarantee as laid out in the state’s 1849 Declaration of Rights.

“Americans should never be forced by their government to promote messages conflicting with their beliefs,” NIFLA writes at its campaign website, StopFrocedAbortionPromotion.com. “However, the State of California recently passed a law mandating that pro-life pregnancy centers and their staff and volunteers advertise tax-funded abortions.”

Meanwhile, pregnancy help centers that do not offer medical services will be required to post the following signage in two “clear and conspicuous” places—“in the entrance of the facility and at least one additional area where clients wait to receive services,” as well as in “any print and digital advertising materials including Internet Web sites”

Click here to find out more about the webcast.