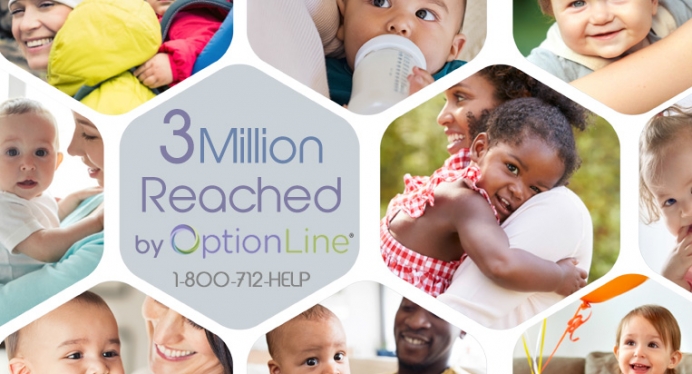 In the past 15 years, a total of 3 million women targeted by the abortion industry have reached out to Option Line—the nation’s only fully staffed, bilingual, 24-7 pregnancy helpline—for life-saving help in an unexpected pregnancy.

Now, leaders at Heartbeat International, which runs Option Line, are calling upon supporters and others within the pro-life community to pray with them for the 19-year-old woman who brought the total to 3 million late last week.

“Jennifer,” whose name is withheld for confidentiality purposes, reached out to Option Line on Thursday evening, Feb. 22, shortly after she found out she was pregnant.

Contacting Option Line (1-800-712-HELP, OptionLine.org) from her home in Fort Wayne, Ind., Jennifer’s boyfriend and family were still unaware that she was pregnant when she found Option Line via Google search—where, much to the abortion lobby’s chagrin, more women and men are finding pro-life help than ever before.

As Jennifer told her story to an Option Line consultant via live chat, she made it clear that, while she didn’t want to resort to abortion, she also didn’t feel at all ready to become a mother.

Jennifer—one of well over 1,000 women to contact Option Line that day—was given the time she desperately needed to think through all her options, and she was also given the chance to make an appointment with A Hope Center, which serves women in three locations throughout the Fort Wayne area.

“We’re so incredibly thankful for every single woman, man and child represented in the 3 million calls we’ve received over the years,” Boston said. “No woman should ever have to face a surprise pregnancy alone, so we’re asking our friends to join us in praying for Jennifer today.”

With an emphasis on connecting women and men to local pregnancy help centers, Option Line answers contacts in English and Spanish around the clock, as well for dozens of national outreaches, including the National Safe Haven Alliance, Bethany Christian Services, Heroic Media and more.

“A woman who’s seen a positive pregnancy test is on a journey,” Boston, who has been involved in pregnancy help work since 1989, said. “We’re honored to come alongside women in Jennifer’s situation at any hour, day or night, to make sure she has everything she needs to make a life-affirming choice."