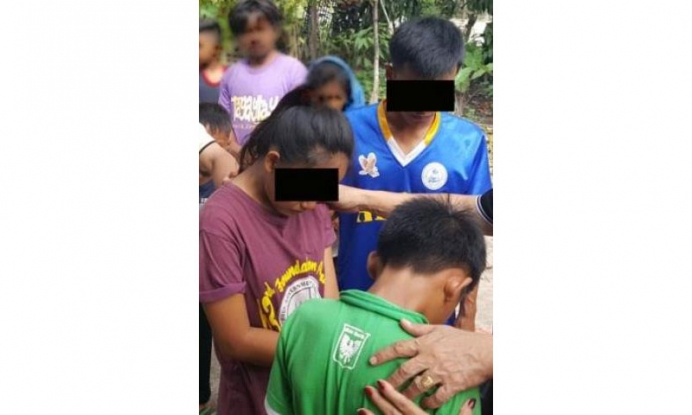 Christians pray for Naomi and Joseph, whose father was killed for his faith. Photo Courtesy: Voice of the Martyrs

A Heavy Dose of Perspective from the Philippines

At 12 and 10 years old, Naomi and Joseph Padilla will grow up without a daddy. Theirs was shot and killed by two Muslim men right before their eyes Sept. 11 in their village in the Philippines.

Why he was targeted, specifically, seems unclear. What is undeniable, however, is that Naomi and Joseph’s daddy—an elder at a local church—was murdered because he was a Christian.

I read about Naomi and Joseph in an email I get from Voice of the Martyrs. As a Christian, a son, a dad, and an elder at my local church myself, it was easy to identify with this story. Here’s a couple of Little League-aged kids who won’t ever see their dad again. Here’s a church who feels the sting of loss as they follow Christ on a road characterized by suffering.

Here’s a man of God who counted his very life “not worthy to be compared to the glory yet to be revealed.” He had to know that following Christ publicly would cost him dearly. Jesus promised him—indeed, every Christian—this much, and said he would be blessed in the process.

At every turn, Jesus let his disciples know that it would cost them everything—houses, children, families, life itself—to follow him. In “The Cost of Discipleship,” Dietrich Bonheoffer, who was executed for his part in a failed plot to take down the Nazi regime, summed it up perfectly in his opening words: “When Christ calls a man, he bids him to come and die.”

Neither was this message lost on the early church and apostles. After being beaten and humiliated for proclaiming the name of Jesus in Acts 5, the apostles Peter and John are said to be, “rejoicing that they were counted worthy to suffer dishonor for the name.”

This rejoicing in—and expectation of—suffering for the name of Christ becomes a major theme of a letter from Peter to churches scattered abroad. One of the most memorable points in 1 Peter is the following warning: “Beloved, do not be surprised at the fiery trial when it comes up on you to test you, as though something strange is happening to you.”

In other words, suffering isn’t weird or unexpected for the Christian. It’s part of the deal as hope-filled exiles, often pushed to the outskirts of civilization.

Tweet This: Suffering is part of the deal for hope-filled exiles. #prolife @Hobbnobbin #MondayMotivation

Hearing of the persecuted church at Philippi, the apostle Paul—himself in prison for preaching Christ—assures the believers there that, far from an aberration or a departure from the normative course of Christianity, suffering for the sake of Christ is both expected and, rightly understood, an extraordinarily high honor.

Writing to his protégé at the end of his life in 2 Timothy 3, Paul—formerly the MVP of the prestigious Persecutors of Christians League—tells his “child in the faith” that “all who desire to live a godly life in Christ Jesus will be persecuted, while evil people and imposters will go from bad to worse, deceiving and being deceived.”

From Philippi and the Philippines to Illinois

As I heard about Naomi and Joseph’s terrible loss, my prayer for them is that God would raise them up as great missionaries for Jesus’ sake. That people who have not heard or responded in faith to the Gospel word would hear it and become followers themselves through two radical believers whose faith has been forged in the fires of suffering.

I pray these two precious souls would be comforted and stirred—and I along with them—by the reality that, even today, their daddy joins those who cry out for that day when God himself avenges their blood.

The answer in the meantime, John tells us in Revelation 6:11, is “to rest a little longer until the number of their fellow servants and their brothers should be complete, who were killed as they themselves had been.”

And that brings us to our moment. Here in America, we Christians are—at the very least—able to see the horizon of a day where it’s not just unpopular to live out our faith, but illegal. And that day is coming regardless of this year’s election results.

Tweet This: Suffering is part of the #Christian's calling. Let us not shrink back. #prolife @Hobbnobbin

In the Christian pro-life pregnancy help community, governmental powers are aligning to stop us from saving lives. The opposition has been increasing for years, but California’s law forcing pregnancy centers to advertise for taxpayer-funded abortions made it official.

Then came Illinois, where powerful opponents to the truth and to life itself have seen fit to wield the ever-increasing power of the government to force pro-life medical professionals to get with their deadly agenda and refer women for abortions, against everything these men and women believe and hold dear.

Long-time voices in the pregnancy help community, Jim Harden, Kirk Walden, and Heartbeat International president Jor-El Godsey have each spoken expertly to this issue, with the latter urging pro-life pregnancy help efforts in the Land of Lincoln to refuse compliance with this wicked edict when it comes into full force in January 2017.

May We Be Faithful

Likely, the Illinois law—should it stand—will force faithful believers affected by the law to surrender their medical licenses, relocate to another state, or go back to the drawing board and re-envision their approach to running a pregnancy help medical clinic.

The model for a pregnancy help medical clinic, remember, didn’t come down from heaven. But we know one who did. We’re a creative bunch of people, we Christians. We can figure out how to help women in unexpected pregnancies without signage, ultrasounds or SEO. That’s what coffee shops, basements and living rooms are for.

It’d be great if we didn’t have to, but we may soon have no choice.

As we pray and consider these things—and as we pray for our friends at Alliance Defending Freedom, American Center for Law and Justice, Pacific Justice Institute, National Institute for Family and Life Advocates and more, who are rightly appealing the aforementioned laws in court—let’s continue to add perspective.

Let’s remember to pray for Naomi and Joseph, growing up without a daddy in the Philippines.