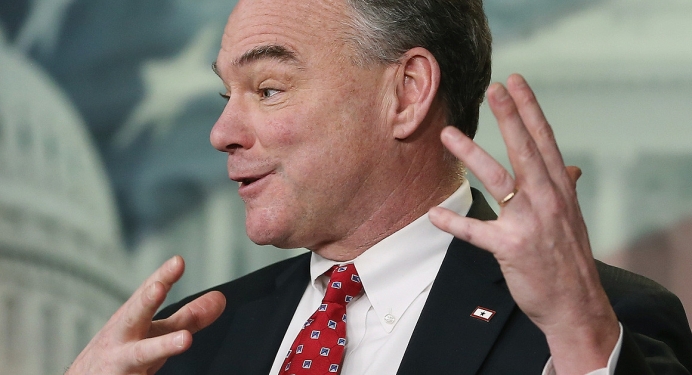 Clinton, Kaine and Co. Don't 'Trust' Women. Let's Talk About Who Does.

If we make it to 2017, we’ll likely remember—with requisite shame—2016 as the year of the non sequitur.

Gov. Pence wanted to know why Sen. Kaine, Hillary Clinton and the Democratic Party platform itself are so committed to abortion on-demand that they not only oppose every conceivable abortion law or regulation, but are willing to overturn more than 40 years of precedent by forcing American taxpayers to fund abortions at home and abroad.

Sen. Kaine, in response, wanted to know why his counterpart doesn’t trust women.

Here’s a portion of the exchange leading up to Kaine’s question:

PENCE: ... let's welcome the children into our world. There are so many families around the country who can't have children. We could improve adoption...

PENCE: ... so that families that can't have children can adopt more readily those children from crisis pregnancies.

Hailing the magnificence of the “trust” challenge, media sources immediately hailed the exchange as a shining moment not just for Kaine, but for the Clinton campaign and the Democratic Party.

Tweet This: Clinton, Kaine don't #trustwomen. Here's why, and here's who does. #abortion #prolife

As one headline at the Huffington Post proclaimed, “Tim Kaine Schooled Mike Pence On Abortion,” Cosmopolitan called the exchange “one of [Kaine’s] stronger moments in the debate.” Elite Daily headlined its take, the “Best Question Of VP Debate.”

Meanwhile, the award for Most Outlandish Hot-Take would surely go to Slate.com’s “Don’t Forget! Trump/Pence Is the Ticket of Forced Birth.”

While Kaine and friends make hay on a nonsensical rhetorical flourish, “trust” is far from a hallmark of the abortion lobby. If abortion and trust had as close a relationship as Kaine suggests, after all, why don’t abortion clinics allow women to see an ultrasound of their preborn baby before executing the abortion?

Planned Parenthood, a primary endorser of Clinton’s, has routinely opposed state laws—most recently in Pence’s Indiana—that require women to at least be shown an ultrasound image of the life they carry inside. Why would Planned Parenthood want to stop women from seeing a picture of their baby if it holds “trust” in such high esteem?

Then again, if it trusts women, why does Big Abortion tell women—contrary to biological facts found in any 5th-grader’s textbook—their child is nothing more than a “blob of tissue”?

Why, if “trust” is such a bedrock, don’t abortion clinics tell women—as pregnancy centers do—that they don’t have to choose between a career and a child? Is that a mystery that only pro-lifers have discovered, or is it a simple breach of trust?

It would seem “trust” is the wrong term for abortion supporters to commandeer.

Abortion Alternatives in the Real World

Granted, Pence and the Republican Party have had significant ground to recapture in the current election cycle following Donald Trump’s on-air gaffe back in March of 2016, when he told MSNBC host Chris Matthews, “There has to be some form of punishment” for women who have abortions if the procedure was made illegal.

The comment initially sent shockwaves across both sides of the abortion divide, and Pence was in the unenviable position Tuesday night of drawing the distinction between what he called the words of an unpolished politician—that is, Trump—and the actual policy positions of a prospective administration.

Pence’ pivot to on-the-ground support and help during an unexpected pregnancy may not have garnered headlines, but it has far more to do with the real world than a Twitter-ready reference to “trust.”

Over 20,000 Indiana women in the past two years would testify to that.

In the past two years as Indiana’s Governor, Pence has piloted and expanded a program that routed a total of $3.4 million in Temporary Assistance for Needy Families (TANF) to 22 local pro-life pregnancy centers throughout the state.

Reimbursing pregnancy centers and medical clinics for “counseling for breastfeeding, childcare, depression, drug abuse, grief, emotional abuse, physical abuse, sexual abuse, fetal development, and more,” the program served 11,579 women in the past 12 months, according to Real Alternatives, which administrates the program in conjunction with the state’s Department of Health.

Well over 8,000 of those women received prenatal care through the program, which saved Indiana taxpayers an estimated $174 million, based on the Center for Disease Control’s valuation of prenatal care.

One of those women stopped by Matrix LifeCare Center in Lafayette just two weeks ago. With her unborn child’s father in jail, the woman had scheduled two appointments for an abortion—including one at a Planned Parenthood just down the street—when she stopped in for help at Matrix.

Already the mother of a toddler she’s lost custody of, the woman was able to slow down and consider her options at Matrix. She chose to follow through with her pregnancy and is now enrolled in a parenting program at Matrix, which is covered in the program Pence authorized starting in 2014.

“[The program] allows for us to really spend time with the client and uncover obstacles that she may have so that we can help her overcome those and really walk with her,” Matrix CEO Melissa McAtee said. “We’re able to really listen, understand her situation, and provide her with care that’s specific to her needs.”

The program also allowed Matrix, an ultrasound-equipped medical clinic that performs free STI testing and well-woman exams, to upgrade its location from a 2,000 square-foot facility to a 7,500 square-foot former ob-gyn clinic.

The move took place over the past weekend, and the staff was able to meet the needs of the first abortion-minded client Monday morning. Having received funding through the state program since May 2016, the walk-in was one of 500 clients Matrix has been able to reach with life-affirming help in just over five months.

A Matter of Trust

Which brings us back to the original question: What about trust?

When it comes to women in unexpected pregnancies, life-affirming pregnancy centers like Matrix have cornered the market on trust. With no financial incentive, nothing to gain from a client, there are 2,500 pregnancy help organizations across the U.S. just like those Pence has had a hand in funding in Indiana.

Each of these locations is a shining light of trust. We trust women to make the healthiest choice for everyone involved in an unexpected pregnancy, which is why we give each woman all the information she needs to make an informed decision.

Unlike profit-driven abortion clinics, pregnancy help medical clinics trust a woman by showing her a live image of her preborn child via ultrasound. We trust women by providing compassionate support and real choice. We trust women by telling them the truth.

At the end of the day, Sen. Kaine would do well to ask his question into a mirror: Why doesn’t he or his party platform trust women?

Tweet This: We #trustwomen by telling them the truth about #abortion. #prolife #pregnancyhelp