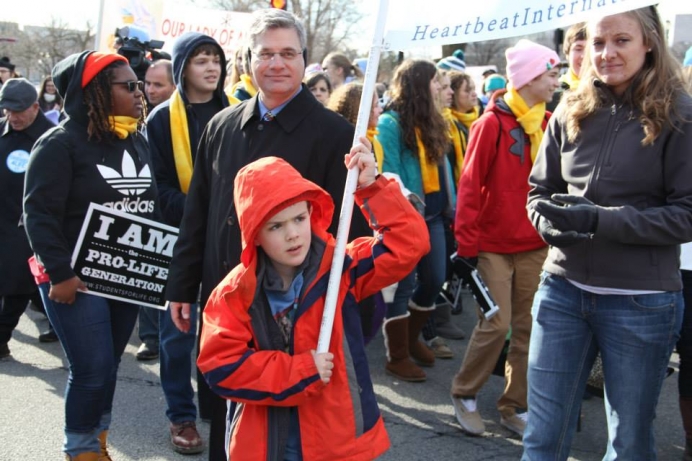 Heartbeat President to Illinois: "To bow the knee to the state is to deny the very foundation of our mission"

Addressing a change to the state law, Heartbeat International president Jor-El Godsey issued a letter Wednesday to the network’s 49 affiliates in Illinois, urging the nonprofits to refuse compliance when the legislation takes effect Jan. 1, 2017.

Signed into law July 29 by Republican Gov. Bruce Rauner, the legislation forces medical providers—including but not limited to life-affirming pregnancy help medical clinics—to refer clients seeking an abortion or abortifacient contraceptives to a provider “who they reasonably believe may offer” abortions.

This, Godsey wrote to Heartbeat International affiliates in the state, puts them in a clear position of choosing to follow biblically formed conscience or a state he said “is wielding its power against us.”

“This direct assault on our pro-life, pro-health and pro-woman values cannot be allowed to stand,” Godsey, who has served in the pregnancy help movement since the early 1990s, wrote in the letter. “Each life-saving entity in Illinois was established as a safe place where women can find the help and hope they need to embrace motherhood. This law instead would force you to refer for and promote the very lethal act you were formed to oppose.”

Despite arguments to the contrary from the bill’s proponents as it passed through the state Senate in the summer of 2015 and the House in 2016 on party-line votes, the bill modifies the Illinois’ Health Care Right of Conscience Act to compel pro-life medical providers to choose one of three ways they can refer for an abortion.

In addition to a requirement of a medical provider to “inform his or her patient of… the risks and benefits of treatment options”—which include abortions, he or she is then bound to several conditional requirements, including Section 6, Paragraph 3:

At least 51 pregnancy help medical clinics will be directly affected by the law, which had previously been held as the “gold standard” of state-level conscience and freedom of expression protections.

One nurse in the state, Sandra Mendoza, for example, is suing the Winnebago County Health Department under the current version of the law after she was forced out of a position she had held for 18 years because she would not participate in abortion or abortion referrals.

The law is currently being challenged by a lawsuit in a state circuit court, with Alliance Defending Freedom (ADF) representing two Heartbeat International affiliates and a doctor as named plaintiffs.

While the legal process plays out, Godsey cautioned that pregnancy help organizations in the state need to prepare themselves for a protracted battle with a long-term view of the consequences compliance can have both on the local level and at a national level.

“This law demands that we violate both individual conscience and the ethical standard of the entire pregnancy help community,” Godsey said, referring to a tenant in the Commitment of Care and Competence to which pregnancy help organizations agree as a condition of affiliation with major groups including Heartbeat International, Care Net, NIFLA, and others.

“To violate this major tenet of our life-affirming outreach, even if compelled by the government, represents an undeniable breach of ethics. To bow the knee to the state is to deny the very foundation of our mission.”

Tweet This: "#Illinois #SB1564 demands we violate both conscience and ethics." #prolife @HeartbeatIntl

Although the language of the bill does not specify how the law would be enforced, it is clear that the change would make medical providers, including pregnancy help medical clinics and possibly non-medical resource centers, vulnerable to lawsuits from clients to whom the entities do not speak the government-mandated message.

Wednesday afternoon, a National Public Radio affiliate in Pasadena reported that Los Angeles pregnancy help medical center that provides free ultrasounds was forced to comply with the law, which follows the news of L.A. City Attorney Mike Feuer bullying another medical center into complying with the law in August.

While Godsey and others contend that law in California forces pro-life entities and persons to speak a government-dictated message in violation of the First Amendment’s protection of free speech and religious liberty, the Illinois law’s stipulation that pro-life people refer for abortions is particularly ominous.

“It is imperative we make a stand against such political malfeasance,” Godsey said. “Today, in the U.S., and in Illinois, the Constitution affirms our right of conscience and free speech to champion life and life everlasting. This is the very case that may be used to deny those rights.”