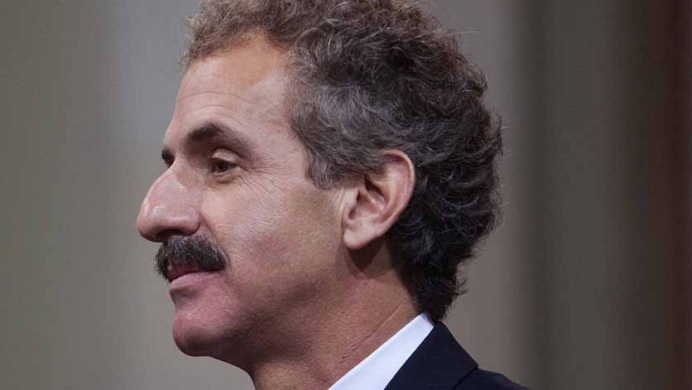 The Political Power Play and The Impending Power of Life

As we consider Los Angeles City Attorney Mike Feuer’s attack on a pregnancy help clinic in the City of Angels, let’s gain perspective: This story is as old as the Bible.

Let’s go back a couple of thousand years to the moment when Jesus stood before Caiaphas in Matthew 26. Caiaphas, getting angry because of Jesus’ silence during his own show trial, demands: “I adjure you by the living God, that you tell us whether you are the Christ, the son of God.”

Jesus’ answer? “You have said it yourself; nevertheless, I tell you, hereafter you shall see the son of man sitting at the right hand of power, and coming on the clouds of heaven.”

Caiaphas then tears his robe, crying out that Jesus is a blasphemer. The show trial is suddenly over and Jesus is condemned to death.

Not to give a Bible study in this column (well, maybe a short one), but what made Caiaphas so angry? Simply put, Jesus claimed to be the Son of Man referenced in the book of Daniel, the one upon whom God would give a kingdom which would last forever, a kingdom where the Son of Man—Jesus—would rule.

Caiaphas was fearful. Jesus was claiming power Caiaphas, the high priest, wanted to maintain. If Caiaphas allowed Jesus to go free, he realized his own authority would be in question. We know today that Caiaphas was making a spiritual decision. In Caiaphas’ eyes, this was a purely political decision, one which would keep him in power.

So it is with Mike Feuer. I can’t read the city attorney’s mind and this is not to paint him as a modern-day Caiaphas, but can anyone deny that his motives are political? California’s so-called Reproductive FACT Act, which Feuer would claim he is simply enforcing, is tied up in courts right now. Therefore, it is not being enforced. Except in Los Angeles.

For those who don’t know, the Reproductive FACT Act singles out pro-life clinics offering ultrasound or pregnancy tests to post or give patients a written notice which contains information on how to get connected, albeit through a county social services office, with an abortion clinic.

It’s a political win for the abortion industry; an opportunity to control the speech of life-affirming organizations.

Why did Feuer go after The Pregnancy Counseling Center? Why did he send them threatening letters when they failed to comply with his wishes? Why, with all of the crime Los Angeles is facing, did Feuer (keep in mind, Feuer’s position is elected) decide to send a fake client to the PCC in an attempt at an undercover sting?

Mr. Feuer spent a lot of time and multiple employees—all on the taxpayer dime—to wear down the PCC, which just so happens to be located across the street from a busy abortion center. With all of the financial issues Los Angeles faces, with all of its challenges with crime—why was it so vital to zero in on enforcing a questionable law still being debated in the courts? Odds are, this law will be struck down and all of Feuer’s “work” will wind up on the proverbial cutting room floor.

Again, I don’t know what Feuer is thinking. But I do know politics. Feuer is a Democrat, supported by the same groups which always support Democrats. He once served in the California assembly, and one can make an educated guess that he is looking to a bigger political future. What better way to solidify the support of the base than bullying the nearest pro-life entity?

Am I making Mike Feuer out to be a modern-day Caiaphas? Not at all. But like Caiaphas, he appears to be a political animal. Political animals use their levers of power to stay in power—and to grow their power. Like the Geico commercial tells us, “It’s what you do.”

But we—the Pregnancy Help Community—need to see our work as a spiritual battle. We must understand that as we take new ground, political power players—in need of abortion dollars to fund campaigns—will align against us.

And make no mistake, we are taking ground. If we want recent proof of this, let’s go to Iowa, Florida, Philadelphia, Texas and Miami. As an aside, can we think of time when an abortion center took ground from a life-affirming entity? Even once?

We seek to free those shackled by a past decision to end a pregnancy through abortion, to free those who believe an unplanned pregnancy cannot have a positive, life-affirming outcome and, to free those trapped by the idea that a sexual relationship is not just for marriage and can be casually entered into with no emotional or physical consequences.

We are freedom fighters.

When political forces line up against us, we must keep fighting with the love of Christ and with a passion to serve those we see. As we do, we must also remember that we are in every sense, the hands and feet of Jesus Christ. This is something to think about.

Many will tell us the end result of Jesus’ conversation with Caiaphas was his own death. We beg to differ.

While Caiaphas’ political decision was designed to stop the freedom Jesus brought to the people, in a few weeks that freedom would spread like never before.

I don’t know the next political power play we in the Pregnancy Help Community will face. But I do know this: It will only make us stronger—and the hope of life will spread faster than ever before.

Kirk Walden is a senior writer with Pregnancy Help News, an Advancement Specialist with Heartbeat International and author of The Wall. He also blogs at www.kirkwalden.com. For banquet speaking engagements, This email address is being protected from spambots. You need JavaScript enabled to view it. at Ambassador Speakers Bureau.