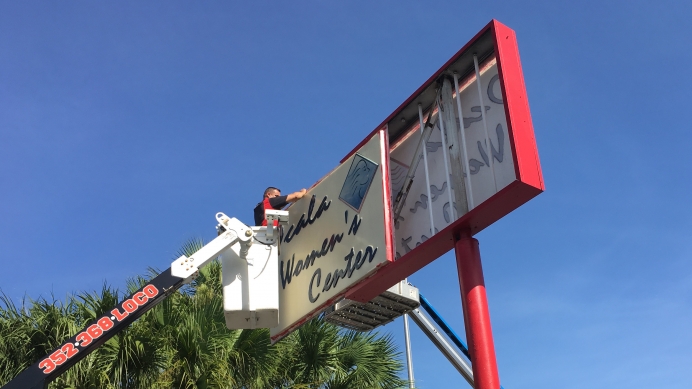 For those wondering what God can do when Christian ministries pull together, they need look no further than Ocala, Fla. Here, He used a long-term partnership to slam the door on the abortion industry and build two life-affirming ministries at the same time.

Karla Grimsley, executive director of Interfaith Emergency Services in Ocala had a problem. The challenge was so big, only God could solve it. But when He did, everyone in the area—and now nationwide—could see that when God works, all things become new.

Interfaith Community Services reaches out to the homeless and indigent in central Florida, meeting physical needs such as food and shelter, hygiene, clothing and medications.

Interfaith also runs a homeless shelter, and that’s where the problem arose. Because of a lack of space, “two nights a week we had medical professionals in our shelter seeing patients,” Grimsley said. “The problem was that the night they were here, our shelter residents were displaced.”

But the medical facility they were eyeing was not just any clinic, it was an abortion clinic owned by the notorious James Pendergraft, an abortionist running four clinics in Florida and constantly in legal trouble.

Pendergraft, whose license was suspended five times by the Florida Board of Medicine, lost a $36 million lawsuit in 2011 after a botched abortion resulted in a child born with multiple birth defects. In 2001, Pendergraft and associate Michael Speilvogel were convicted of fraudulently accusing a Marion County official of threatening them, resulting in a 46-month prison sentence for Pendergraft, who served seven months before his release.

As for the clinic, Grimsley says, “We started noticing that it was not being used, so for the past year it sat dormant most of the time.”

She was right; Pendergraft was facing more legal issues with the state and the clinic was not seeing patients. Grimsley’s thinking? “We could be seeing patients seven days a week” if they had the building.

Interfaith applied for a community block development grant, designed to repurpose buildings not currently in use, and even entered negotiations with Pendergraft.

“Our attorney was able to work out and negotiate an agreement, which was a miracle in itself,” Grimsley said. “In the past this gentleman (Pendergraft) especially didn’t want to sell to faith-based groups.”

In the end however, “He actually signed a contract to sell to us for less than the appraised value.”

As it is with many miracles, there was a last-minute glitch. At the end of May—just days before the community grant was to be approved—Pendergraft began using the building again. The grant, only for buildings not in use—was off the table.

“In good conscience, I couldn’t sign a statement saying the building had not been in use because obviously it was,” Grimsley said. “But, we still had a contract to buy if we could close by June 30.”

Interfaith’s board decided to push ahead. “There was a lot of prayer and a lot of consideration,” Grimsley explains. “We just decided that if God wanted this to happen, it was going to happen.

“We put our faith in Him and just started a silent, behind-the-scenes capital campaign to raise the money and purchase the building,” Grimsley said. “Within five days we had $130,000; going into closing we had about $160,000.”

Interfaith’s foundation loaned the rest of the needed funds, and on June 30, Interfaith was the new owner of what was the only abortion clinic in Marion County.

As of August 5, the building had a new purpose. Christian doctors and counselors are providing free primary care and mental health counseling, with a dental clinic and vision center on the horizon. The new name of the clinic tells it all: The Center for Life.

In a perfect picture of what happens when the body of Christ comes together, Grimsley notes she had a number of partners in this project, including Barb Stephens, executive director of the Women’s Pregnancy Center—a pregnancy help medical clinic—in Ocala.

Tweet This: "God is on the move." #prolife #pregnancyhelp @esmarion

“Barb has been a prayer partner with us for years,” Grimsley said. “And, she also connected us to some of the donors to help us do this.”

The partnership will now include a garden at The Center for Life, with a memorial wall for those taken by abortion.

“It’s going to be called ‘Charlie’s Garden’ and hopefully for years to come, it will be a place where people who are dealing with regret can go to this garden for prayer and memorialize their babies,” Grimsley added.

As for Stephens, she couldn’t be more thrilled with recent developments. Often, WPC connects with Interfaith when a client vulnerable to abortion needs emergency services.

“It’s not enough to verbally encourage women and men to choose life,” Stephens says. “We must empower them to do so by providing necessary education, free services and resources.”

According to Grimsley, the partnership works both ways. While Interfaith may need to perform pregnancy tests in certain situations, “We’re going to refer people to the Women’s Pregnancy Center. If they’re trying to find out if they’re pregnant, we’re going to suggest they go there for the test so they can get linked in to that ministry.”

For Interfaith, connecting clients to WPC only makes sense. Last year, WPC provided 1,900 pregnancy tests and 1,200 ultrasounds, with 95 percent of clients choosing life for their babies.

In addition, Women’s Pregnancy Center is growing, too.

Stephens says WPC has purchased new property, and will soon begin construction on 3,500 square foot addition to its existing building.

“God is on the move” in Marion County, Stephens said. “We’re excited to see what God has in store for both Interfaith and WPC in the years to come as we seek to serve Ocala and our surrounding community for His glory.”