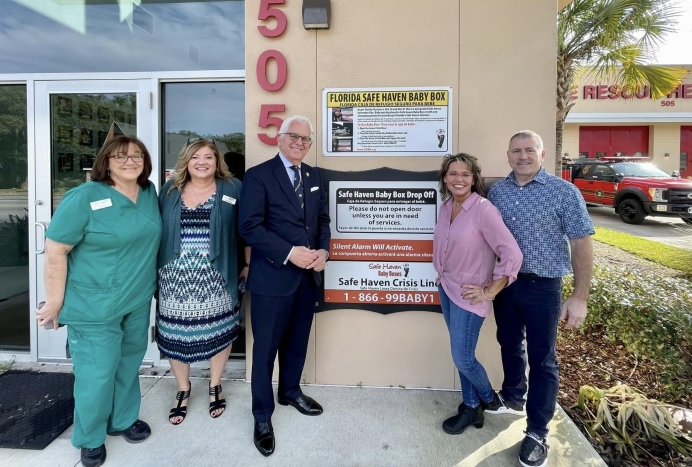 A Safe Haven Baby Box is a secure box installed on the exterior wall of a designated fire department or hospital, providing a safe place for a parent to legally surrender a newborn while maintaining anonymity.

The safety device is equipped with an air system as well as a silent alarm that sounds inside the building to alert officials a baby is inside once the door is closed and the parent has had 60 seconds to depart. The box locks on the outside upon a baby being placed inside and staff can easily retrieve the baby from an interior door.

The baby is then evaluated at a local hospital and adopted within 30-45 days.

The founder of Safe Haven Baby Boxes and the National Safe Haven Crisis Line, Monica Kelsey, was inspired to start her organization and design the boxes after learning she herself was abandoned as an infant and about a “baby box” in South Africa.

The more she researched, she discovered the concept was anything but new. In fact, similar drop-off spots for infants have been implemented across the world, including in Canada, South Africa, Nicaragua, South Korea, Austria, the Czech Republic, Germany, Latvia, Poland, and Switzerland.

In the U.S., each state has its own version of a Safe Haven law, sometimes also referred to as a “Baby Moses law,” but the basic premise remains the same, allowing parents to leave their newborns at designated locations, such as fire stations, police stations, and hospitals, without facing criminal charges for abandonment or neglect.

While the child's age and the location at which the child is allowed to be surrendered varies by state, thanks to a law passed in 2000, a parent in Florida can surrender their newborn up to seven days of age at any 24-hour staffed fire or EMS station or hospital.

The Safe Haven laws were established as part of an effort to reduce infant abandonment and infanticide and Safe Haven Baby Boxes help tackle those issues as well.

Safe Haven Baby Boxes were created so mothers could surrender their babies without having to walk into a designated drop-off and risk being seen by others. The added privacy and confidentiality can make the process less stressful and more appealing to young mothers who are afraid and cannot keep their babies or are even trying to keep the birth under wraps altogether.

Tweet This: Ocala Fire Rescue was the 1st department in Florida to install a Safe Haven Baby Box in 2020 & just had its 1st surrendered newborn arrive

And the surrender of the first Florida baby over the holidays in Ocala proves the program truly does help save lives - a sentiment with which the Ocala fire chief agrees.

The mayor and Safe Haven Baby Box founder also expressed their happiness the resource was readily available at a recent press conference.

“I'm so happy to hear of this miracle baby,” Ocala Mayor Kent Guinn said. “I knew when we did this in 2020, this day would come – we all did – we just didn't know when. We're glad it was there as a resource for the mother of this child. I'm sure there will be a bright future ahead for this precious child."

Kelsey also shared her gratitude for the parent who made this decision and the city for being prepared with one of her Baby Boxes.

"We are so proud of this selfless parent who has lovingly surrendered their infant via a Baby Box over the holiday!” Kelsey said. “We are so happy this community was prepared for this situation. We know this baby will be so loved by an adoptive family and we are so thrilled to be a part of protecting infants from abandonment.”

The Ocala surrender comes just a little over a month after a heart-warming story was released about a police officer and his wife adopting a baby named Myah, who had been surrendered at a Safe Haven Baby Box in Indiana - a happy ending the Ocala baby will soon experience.