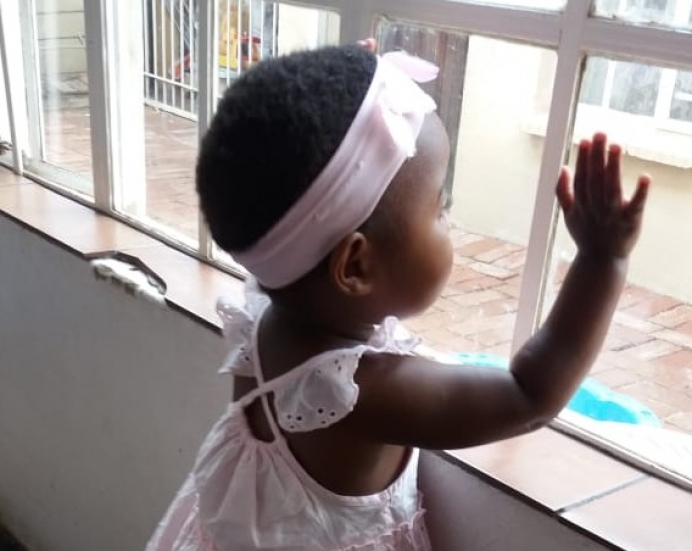 “Excitement and nervousness as we wait for Forever Mommy and Daddy to arrive. Bye Bye Sweet Baby Girl. Your adventure with your family begins!” Door of Hope Children's Mission

Precious photos of a little girl watching out the window of a children’s mission in South Africa as she waits for her adoptive parents sparked notice on social media, helping to raise awareness for the mission’s life-saving services.

Dressed in a pink eyelet outfit and matching headband with little white sandals, the precious toddler gazes intently for her new mom and dad in the photos shared late last year, poignantly pressing her little hand against the window in one image.

“Excitement and nervousness as we wait for Forever Mommy and Daddy to arrive,” the tweet from Door of Hope said. “Bye Bye Sweet Baby Girl. Your adventure with your family begins!”

The mission followed this farewell wish quoting former U.S. Senator Jim DeMint on parenthood, saying, “One of the greatest titles in the world is parent, and one of the biggest blessings in the world is to be one.”

“All the best to this beautiful soul and new parents,” said one Twitter user. “May she have a wonderful new life,” said another, and a third said, “I wish her a happy forever.”

Excitement and nervousness as we wait for Forever Mommy and Daddy to arrive. Bye Bye Sweet Baby Girl. Your adventure with your family begins!

“I had no idea when I posted these pictures that it would create such an impact!” Door of Hope Operations Director Nadene Grabham told Pregnancy Help News.

The precious little girl came to the mission as a newborn in April 2018 and met her forever family early November 2019, Grabham said.

“The picture really captures our goal at Door of Hope,” she said. “Praying for forever parents for all our babies.”

Tweet This: “The picture really captures our goal at Door of Hope. Praying for forever parents for all our babies”

After the post went viral many people contacted the mission to find out information on adoption and donate much-needed baby items, Grabham said, and they also received some financial donations that she expected would carry them into the new year.

“This all was quite unexpected as the only reason we share such pics is to show people what we do at Door of Hope,” she said. “The donations were an added bonus!”

Located in Johannesburg, South Africa, Door of Hope is a faith-based organization with a mission that includes saving abandoned babies and securing them a home, whether through adoption, temporary baby houses or its more long-term village.

On its website, the mission gives the heartrending basis behind its work saving abandoned babies.

Abandonment of infants in South Africa is, unfortunately, a common occurrence. Many of these children are left to die, or simply abandoned, in dustbins, open fields, public toilets or on train tracks. In 1999 the Berea Baptist Mission Church said, “something needs to be done”. Under the leadership of Pastor Cheryl Allen, the church made a hole in their wall and a ‘Baby Box’ was installed allowing for mothers to leave their babies any time day or night for the church to take care of them. The moment a baby is placed, care workers on duty receive an electronic signal alerting them. The baby is taken in and the anonymity of the “donor” ensured. News has spread and other babies have been brought personally by their mothers or have come through other means such as the police, community members, hospitals or clinics.

Grabham shared with Pregnancy Help News some specifics of how the mission also works with baby boxes.

Baby boxes have been used in some form worldwide for many years as a means to provide safe haven for babies whose parents feel they cannot provide them care.

Grabham's explanation of the need for baby boxes was equally heartbreaking.

“We were the first organisation in the world to install a modern-day baby saver,” she said. “It is a metal box built into a wall that offers mommies a safe alternative to leaving their babies somewhere to die.”

“Unfortunately, all over the world babies are abandoned in unsafe places,” she said. “Only one out of every three abandoned babies are found alive in South Africa.”

The mission opened in July 1999 with its baby box, said Grabham, and not long after, they had a visitor from Germany who then went back to Germany and installed a baby box in April 2000.

“There are now close to 33 baby boxes in South Africa,” Grabham said, “and when I was invited to Japan last year to talk about our baby box, we saw that there are now many countries, like China, Japan, Latvia, USA, Switzerland who also have baby boxes or baby savers.”

Some people are against the idea of a baby box, she explained, saying that it takes away the right to a culture and identity for the baby that is placed in the baby box.

The adorable photos posted of the little girl on social media gave a brief but moving glimpse into the mission’s crucial work.

Grabham said, “Since 1999, we have taken in close to 1700 unwanted and abandoned babies and our reward is to see them go to loving forever families.”