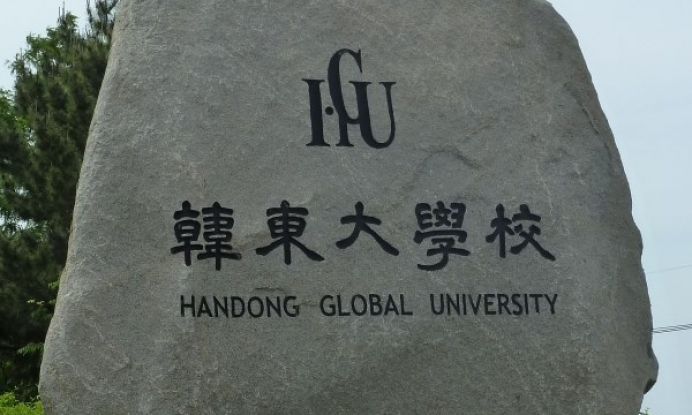 World-Changers, Prepare to be Re-Inspired to Action by The Drop Box

Against almost everyone’s advice, in 2004 I chose not to return to the United States from my year-long Fulbright Scholarship, deciding instead to attend Handong Global University, a law school in the South Korean countryside whose motto was “Why not change the world?”

There was plenty to say in defense of my family and friends who tried to persuade me from staying in South Korea and attending Handong International Law School. That the school was halfway across the world and unapproved by the American Bar Association may have been evidence enough to convince me to come back home, but I chose to stay.

I had found a place that was so much more than an institution. It was a God-given vision, being carried out in the real world.

In the early days of the university, when its first president spent 40 days in prison, loyal students peaceably filled the prison lawn, quietly singing “Amazing Grace” as one. From those early days, students would meet every hour to pray for nations, for visions, and for projects around the world.

As a student body—connected from all corners of the globe by a solitary, world-changing mission—we were visionaries and dreamers, but we were passionately committed to seeing practical good carried out in our world.

So, we went into the trenches.

We served in orphanages. We labored with refugees. We helped women in—and out of—red light districts. We did it, I was there—one among many.

And then somehow, things changed. Life, adulthood, marriage and children ground you and focus your efforts into a seemingly smaller circle of influence. Your grandiose plans to change the world may remain onboard, but the energy to practically walk them out seems daunting and overwhelming.

And if you are at all like me, you have encountered bumps, bruising, and outright injuries from standing up for just causes, or even from everyday life. In fact, we begin to think less of changing the world and more about how overwhelmed and overwhelming the world actually is.

Just a glance at any newspaper brings to our attention the latest terrorist beheading. We become aware of human trafficking taking place in our very own backyards.

We become desensitized to the late-term abortion clinics, where horrific practices are covered up—babies dying daily and mothers not only bereft of motherhood, but some subjected to nightmarish physical complications.

We see numbers of debt piled upon debt, upon debt. We accept the notion that lasting change is out of reach.

And then stories like Pastor Lee Jong Rak and “The Drop Box” come along.

Without a vision or a plan to open an orphanage, Pastor Lee did what he could do with what he had. Faced with the reality of widespread abortion and the infant abandonment epidemic that landed three babies on his family’s doorstep, Pastor Lee put into practice his Christian conviction of the sanctity of life.

Pastor Lee was faced with an implicit decision: do something—anything, or, do nothing and allow the child to add to the staggering reality of abandonment on the bustling streets of Seoul. Pastor Lee saw a need, presented an opportunity, and chose to welcome each life as just that—a life worth saving!

The Drop Box and Pastor Lee’s ministry at Jusarang—the latter half of the word “sarang” means love—has received worldwide press coverage almost from its genesis, especially after aspiring producer Brian Ivie and his film team flew halfway around the world to document his story.

What Ivie—whose ambitions have now been shaped by Pastor Lee’s seeing servant heart put to action—and his team at Kindred Media have produced in The Drop Box offers a wakeup call to everyone who’s ever thought they could change the world.

“God’s love is not this schmaltzy, coffee-cup thing,” Ivie said. “God’s love is pretty and messy and goes to the gutters for the broken and lost people.”

My passion to see an end to human trafficking, shaped in South Korea, took a sharp turn in Germany just a few years later, when, in 2011, I became the executive director of a pregnancy help center near a U.S. military base.

For years, I’d engaged the human rights arena on the issue of sexual exploitation. Suddenly, I found myself in what seemed like an entirely distinct field.

As I quickly found out, this was not at all the case.

What I found was, the issues of human trafficking and life-affirming pregnancy help ministry are parallel callings. At their root, both boil down to simply advocating for those who don’t have a voice: those who are unseen, unheard, those who can’t speak for themselves.

At last count, Pastor Lee and the Jusarang Orphanage have rescued 652 babies from abandonment thanks to his baby boxes, which are now multiplying throughout Seoul. But this triumph raises the question: What happen to the rest?

It can be paralyzing to consider the reality of what happens to these children. How many of these abandoned babies are born to women in the sex industry? We must face the reality that human trafficking, pregnancy help work, and the global scourge of infant abandonment numbers aren’t just related, they are often cause and effect.

Adding to the tragedy, abandoned babies can only be held in orphanages for a set period of time before they are released to the streets, often into a life of prostitution, resulting in abortions and cyclical abandonment.

That is the reality of our world—requiring more from us than the raw aspiration to change the world. It takes action. It requires us to do something, anything, to help.

Tweet This: It requires more than raw aspiration to change the world. @TheDropBoxFilm

Pastor Lee did just that and an orphanage came to pass—652 lives and counting. Brian Ivie did that and The Drop Box will be released in theaters across America in three weeks.

In neighborhoods and cities all around the world, pregnancy help centers are doing just that—the next thing to help.

Carrie Beliles is the International Program Specialist at Heartbeat International, working from northern Virginia. She is a juris doctor and the mother of five children, four daughters and a son, and the wife of Major Ben Beliles, an Air Force JAG officer stationed in Washington DC. Carrie was a Fulbright Fellow to South Korea, completed law school at Handong International Law School in Pohang, South Korea and went on to clerk at the Supreme Court of Guam. From 2011-2014 she served as the director of the Ramstein Crisis Pregnancy Center in Germany.