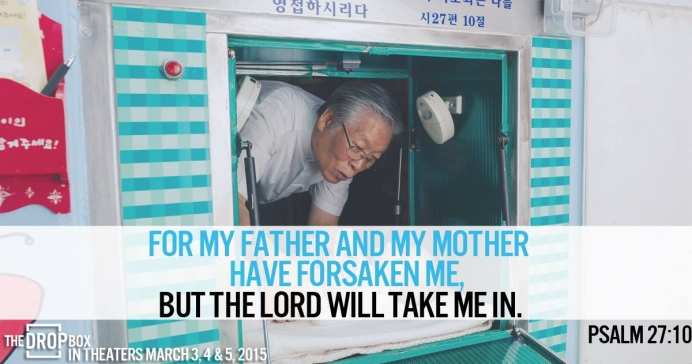 'The Drop Box' to Shed Light on Korean Life-Saver

Every year, an estimated 600 babies are left to die on the streets of Seoul, South Korea.

For Seoul Pastor Lee Jong-Rak, leader of Jusang Community Church, the staggering reality of so many unwanted, discarded babies abandoned to their deaths gave way to a simple, revolutionary solution in 2009.

That was when Pastor Lee and his wife found their third abandoned baby at their doorstep. In response, the couple fashioned a “baby box,” a safe haven where parents who would otherwise have abandoned their baby to die of exposure could now place the children.

Since Pastor Lee opened the fist of what has become known as a “Drop Box” in 2009, the initiative and its partner organization Jusarang Orphanage have rescued 652 babies from the streets of Seoul.

Their story is being told in the upcoming film, “The Drop Box,” which is being produced by Focus on the Family and Kindred Media and airs at select theaters March 3-5.

[Click here to view the trailer and find out where the film is playing near you.]

With abortion officially illegal in South Korean cases not related to the safety of a mother, or in cases of rape, incest or risk of severe hereditary disorders—all of which account for an estimated 4 percent of the 340,000 annual abortions in the nation—most abortions are paid for in cash. Instead of paying for an abortion, which must be performed before 24 weeks, a small but substantial amount of women choose to abandon their newborn babies, leaving them to die of exposure.

Tweet This: @TheDropBoxFilm to shed light on Korean life-saver. #TheDropBox

As in many countries, adoption in South Korea is often “stigmatized and single mothers ostracized” in a way many Westerners cannot begin to fathom. In the film’s trailer, Pastor Lee points out that it is not only South Korea that is faced with this problem: “Globally, there are babies that die due to abandonment.”

Another contributing factor, which caused the babies placed in Pastor Lee’s Drop Box to double between 2012-13 was a change in the country’s Special Adoption Law, which cracked down on the availability of foreign adoptions from South Korea. The law change led, in part, to the number of children placed in the Baby Box to 252 in 2013, compared to just 79 in the previous year.

Built into the wall of Lee’s home, the Drop Box is available 24 hours a day.  Above the slot for the box, a sign in Korean reads, “A place to leave babies,” equipped with blankets and towels inside of the lighted and heated box to keep the baby warm.

When someone places a baby in the box, a bell rings to inform Pastor Lee, his wife and or staff workers. The baby is then brought inside the home where a team of dedicated workers feeds and provides care for the baby.

Lee and his wife who pioneered this effort in part due to their care for their disabled son, are now themselves guardians of 19 children. For the other children, the objective is to find them homes with loving parents.

The Drop Box is “not the ultimate or ideal solution but it’s something that we have to be doing at this moment to rescue those lives,” Pastor Lee told The Daily Signal through a translator in Washington, D.C.  Nor is South Korea the only country struggling with finding families for adopted children.  Around the world today, approximately 150 million children are without permanent homes.

“If that inherent value for a baby’s life isn’t there, there’s always going to be babies dumped in the trash,” Min Hwang, founding director of Women’s Hope Center, a Heartbeat International affiliate and the first known pregnancy help organization located in South Korea, said.

Operating in Pohang, a four-hour drive southeast of Seoul, Min Hwang explained that many shelters or safehouses throughout South Korea discriminate on such grounds as marital status or nationality, worsening the situation for a mother facing an unexpected pregnancy.

“We don't [discriminate],” Min Hwang said. “You're a woman in trouble and needing support and a safe place to stay. Our counselors and safehouse [House of Hope] are open to you.”

Tweet This: "You're a woman in trouble and needing a safe place. We are open to you." @WHCKorea #TheDropBox

How the documentary came to be

After a 22-year old film student at the University of Southern California read about Lee’s story in The Los Angeles Times, Brian Ivie—founder of Kindred Media—along with a group of 10 friends, packed up and traveled over 5,000 miles with the intention of “wanting to figure out where all the love came from.”

Ivie saw this a opportunity for a great story that could develop into something on the big screen, making him famous—his “golden ticket.”

Ivie acknowledged that everything was “stacked” against the movie. Communication was hindered, translation ineffective,  major obstacles to making a film in a foreign country. Nevertheless, the “spirit of that man [Pastor Lee] and how he sacrificed everything for these kids” not only was the underlying factor in the success of the film but transformed Ivie as well.

After a first attempt at making the film proved fruitless, Ivie returned in Dec. 2011. As time went on, Ivie noticed that, not only was his story-telling becoming freed up to focus on Pastor Lee for who he was—rather than the portrayal Ivie had in mind—but Ivie himself was becoming a new man along the way.

“When I started to make it and I saw all these kids come through the Drop Box—it was like a flash from heaven, just like these kids with disabilities had crooked bodies, I have a crooked soul,” Ivie said. “And God loves me still. When it comes to this sanctity of life issue, we must realize that the faith in God is the only refuge for people who are deemed unnecessary.”

“This world is so much about self- reliance, self-worth, and self-esteem. It’s a total illusion that we can be self-sufficient. Christ is the only thing that enables us.”

Are you going out to see "The Drop Box" in theaters March 3-5? Let us know where in the comments.

Carrie Beliles is the International Program Specialist at Heartbeat International, working from northern Virginia. She is a juris doctor and the mother of five children, four daughters and a son, and the wife of Major Ben Beliles, an Air Force JAG officer stationed in Washington DC. Carrie was a Fulbright Fellow to South Korea, completed law school at Handong International Law School in Pohang, South Korea and went on to clerk at the Supreme Court of Guam. From 2011-2014 she served as the director of the Ramstein Crisis Pregnancy Center in Germany.