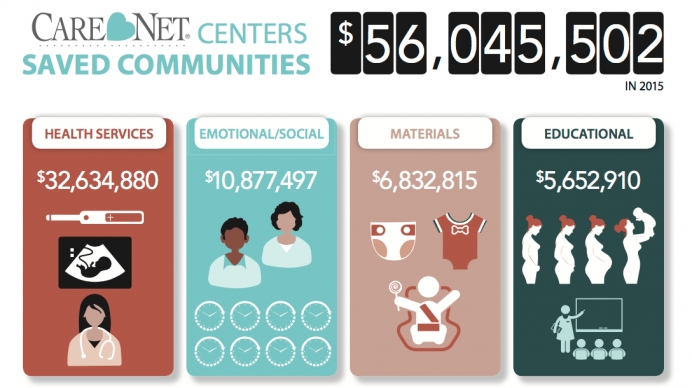 A day after ThinkProgress published an article accusing seven states that fund pro-life pregnancy help organizations of “siphoning welfare money to stop abortion,” one of the nation’s largest life-affirming pregnancy help networks released a timely report of its own Tuesday.

Care Net, which includes over 1,100 affiliate locations in North America, presented eight years of data in, “The Truth: About ‘Crisis Pregnancy Centers,’” utilizing statistics and client testimonials to tell the larger story of the more than 2,500 local pregnancy help centers nationwide.

Taking on a litany of oft-repeated, baseless charges from the abortion lobby, the Care Net report includes a crucial fact curiously omitted by ThinkProgress in its recent coverage: Less than 10 percent of all pregnancy center funding comes from taxpayer dollars, leaving more than 90 percent of local centers’ budgets resting on local donors.

Community-supported pregnancy centers are under pressure to post and disseminate government-dictated signage and information referring for abortions in California and Illinois—the latter of which pro-life groups have said they cannot obey if the law should take effect as scheduled Jan. 1, 2017.

Meanwhile, a summary judgment late last week moved pregnancy centers in Baltimore one step closer to being free and clear of the threat to First Amendment rights a 2010 city ordinance had posed, while similar ordinances have been defeated in Austin, Texas, and New York City.

Tweet This: 9 of 10 #pregnancyhelp dollars are from local communities. @InspireLifeNow #prolife

Aside from cutting the legs out of the anti-life state funding argument ThinkProgress poses, the Care Net report provides a crucial insight into the financial impact of pro-life pregnancy centers on local communities.

In addition to rescuing some 73,000 lives from abortion each year in 2014 and 2015, Care Net estimates its affiliates saved taxpayers over $56 million per year in free ultrasounds, pregnancy tests, baby and maternal supplies, and education for teens and young parents.

A 2010 report from Family Research Council that pooled information from Care Net, Heartbeat International and National Institute of Family and Life Advocates (NIFLA) found the nation’s pregnancy centers saved taxpayers over $100 million combined—a number that did not include 5.7 million uncompensated volunteer hours.

Since 2010, the pregnancy help movement has added nearly 1,000 U.S. sites, out-numbering the combined locations of GAP and T.J. Maxx, according to Heartbeat International’s 2015 Life Trends Report.

Factoring in the $30 million ThinkProgress estimates pregnancy centers receive on an annual basis from states, taxpayers still come out $25 million ahead each year when only the Care Net affiliates—which make up less than half of U.S. pregnancy centers—are taken into account.

The baseline customer satisfaction number for the American Consumer Satisfaction Index (ACSI) is 74 percent for hospitals, 77 percent for the motion picture industry, and 83 percent for breweries, with Anheuser-Bush notching an 84 percent rating in 2014.

Clients leaving a pregnancy center, meanwhile, go home happy 97 percent of the time, according to Care Net’s report. That overwhelming percentage of satisfaction of past clients stands as a powerful rebuttal to the abortion lobby’s unsubstantiated claims that pregnancy centers mislead or coerce women into making a decision for life.

One woman whose story was included in the report, Timily, was 14 years old when she became pregnant and her mother shuttled her off to an abortion clinic. Prior to the appointment, however, Timily’s mother stopped at Pregnancy Help Center of Concho Valley in San Angelo, Texas, looking for more information.

At the abortion clinic, the staff separated Timily from her mother and performed an ultrasound where she was not allowed to see an image of her preborn child, Just before the abortion started, however, Timily’s abortion was unexpectedly called off.

She was five months along in her pregnancy, and the abortion clinic would not execute the abortion without an additional payment.

“I was so relieved,” Timily said. “[My mother] did not get her money back; she just grabbed my hand and we left. She kept telling me how sorry she was. Later she told me that she had seen my ultrasound picture in my file on the desk. She had heard the words of one of the women for the Pregnancy Help Center telling her that God was in control, and she knew we could not go through with it.”

One of nearly 340,000 women and men Care Net served in the past year—slightly outnumbering Planned Parenthood 2014 abortion totals—Timily is representative of the eight in 10 abortion-vulnerable women who choose life at Care Net centers.

“The following week we went back to the Pregnancy Help Center to thank them for their love and their prayers,” Timily said. “They told us they had been praying for us the whole time. They were anxious to help us in any way they could. They offered maternity clothes, a crib and clothes for the baby, and lots of referrals to other local agencies. I am so thankful for everything they did for us.

“A few months later, I gave birth to Damien Rose. He was two months premature and weighed only two pounds at birth. But God saw us through it, and today, he is six months old and completely healthy, receiving all of the love and attention that God had planned for his life.”