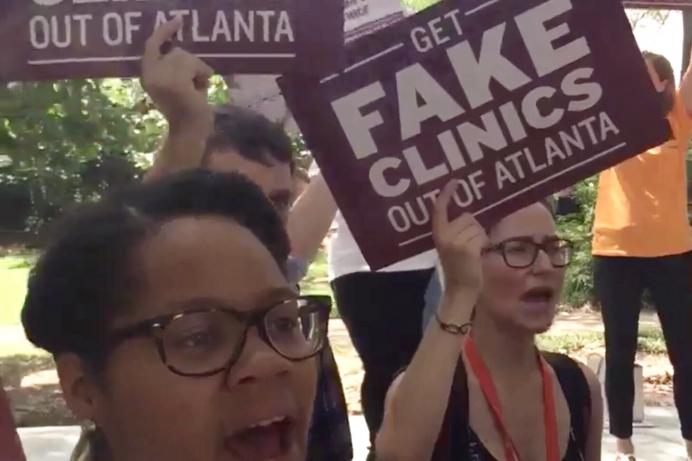 In a recent fundraising email, a pro-abortion group warned that with the coming days of summer, their activist hit team is about to re-up its hyperbolic push to “Expose Fake Clinics.”

“We’ve got a lot planned for spring and summer. We are gearing up for actions to expose these shady fake clinics for what they really are, places that work to shame and manipulate people out of receiving the abortion care they seek.”

I’ll be honest. When I first read the email, I had to do a short refresher on who exactly Reproaction is, frankly, because all of these overdramatic pro-abortion groups start to run together after a while.

And because you too might be wondering, “Repro-who?”, here’s a snippet from the group’s website to explain who they are:

“Reproaction's vision is to uphold abortion rights and advance reproductive justice as a matter of human dignity. [Yes, really.] We introduce a new culture of accountability, and empower and inspire the reproductive rights movement and the broader progressive community to openly and enthusiastically stand up for abortion rights.”

So there you have it: A group that is literally—no, enthusiastically—pro-abortion (as in, the same kind of crowd that applauded New York’s abortion-through-birth bill) is fundraising in the hopes of throwing some disinfecting sunlight on the “shady” life-affirming work of pregnancy help centers.

This is supposedly in the name of “human dignity.”

The truth is that many centers do operate on extraordinarily tight budgets, with 90 percent of total funding coming from their local communities. Their mighty volunteer force is more than 67,000-strong, with 7,500 of those being medical volunteers. (I won’t contest the salty claim that these individuals are “kindly” volunteers.)

An in-depth report assembled by the Charlotte Lozier Institute has already poured plenty of sunlight over these facts. Released last year, the 79-page report is rife with statistics and stories on real families who’ve been served by the nation’s more than 2,750 pregnancy help centers

Tweet This: In 2017, these centers served nearly 2 million women, men, and children with free services, such as ultrasound scans and parenting classes.

PregnancyCenterTruth.com and Pregnancy Help News have poured still more sunlight over these facts for the last several years, busting pro-abortion myths and telling story after story of hope, healing, and redemption. Pregnancy centers all around the world have empowered women and men to reject abortion, to reverse their chemical abortions, to find healing after miscarriage, to break free from sex trafficking, and to find forgiveness after abortion. They’ve helped women find medical care, finish their education, secure full-time jobs, and find housing when homeless.

It’s been said that pregnancy help centers are the best-kept secret of the pro-life movement, something we at Pregnancy Help News have been working to change through the power of storytelling.

If Reproaction wants to join in by “exposing” the not-so-nefarious charity of “kindly” pro-life do-gooders, bring on the summer and bring on more sunlight.

Tweet This: If Reproaction wants to "expose” the not-so-nefarious charity of “kindly” #prolife do-gooders, bring on the summer & bring on the sunlight.