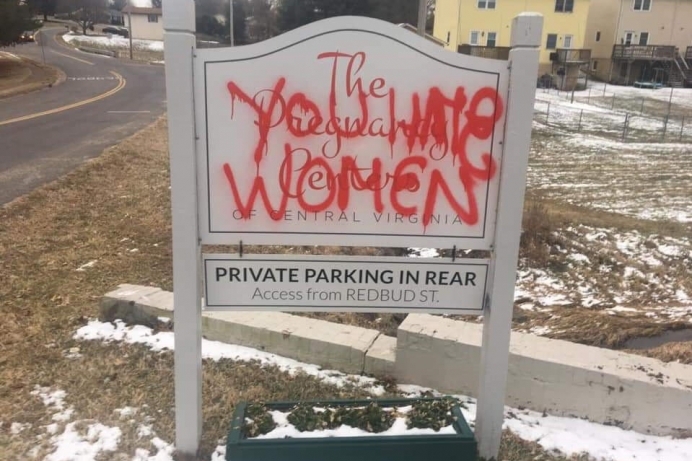 Just recently, a federal judge in Washington state issued the first nationwide injunction blocking the rule’s prohibition of funds to clinics that collocate with abortion facilities or refer to abortion providers. Funding awarded to pro-life centers as announced in March by the U.S. Department of Health and Human Services is to remain in effect.

The new rule, first proposed last year, is more welcome recognition of the valuable services pro-life pregnancy centers offer every year to hundreds of thousands of women, but backlash against the centers continues.

A recent article in Cosmopolitan magazine is only the abortion lobby’s latest attempt to smear the good work of life-affirming pregnancy centers. This time, on the same day the article was published, hate-filled messages were found spray-painted on the Culpeper (Va.) Pregnancy Center’s signs and building and a front window was shattered. The messages read, “Fake,” “You Hate Women,” and “Jesus Hates this [expletive].”

“It makes me sad. I’m not angry; it’s just sad because none of it is true. We’re not a fake clinic; we have a doctor on staff; we have a sonographer on staff. We do ultrasounds, STD testing, pregnancy testing. We’re HIPAA compliant, so we meet all regulations. All of our services are to help women who are facing pregnancy, unplanned or not, with material assistance up to two years old and with medically accurate information on all of their options. We are not here to tell them what to do.”

This director’s characterization is the polar opposite of the portrayal offered by both the hate-filled spray paint and Cosmo’s broad brushes. The Cosmo piece, entitled "Fake Health Clinics Are Tricking College Students," is another stroke in an ongoing smear campaign against pregnancy centers, designed to misrepresent who they are, what they do, and how they do it.

The myriad inaccuracies in the article have some common features. At least two of the three client anecdotes Cosmo relates on or near college campuses were, in fact, accounts from student activists operating at the behest of pro-abortion groups. One was a NARAL Pro-Choice America organizing fellow, and the other was with Planned Parenthood Generation Act.

Contrary to what the Cosmo article purports, the 2,750 life-affirming pregnancy centers in the U.S. fill a unique niche. They are specialists in abortion alternatives—meaning that they offer information and support to help women, youth, and families with pregnancy-related options that affirm human life. Genuine concern for both women and their babies motivates pregnancy center workers nationwide to provide compassionate, respectful, and honest care.

They do not refer for or provide abortion by definition, but they do provide medically referenced information about abortion procedures and risks. They offer a wide range of education and medical services, material resources and linkages to care in the community, including parenting and prenatal education on-site at no or low cost.

Next, the assertion that medical pregnancy centers or clinics are 'not legit' is wholly false. Seven in 10 centers now offer medical services such as free pregnancy confirmation ultrasounds. Medical centers provide services under the supervision and direction of a licensed physician, in accordance with applicable state laws and medical standards, including licensure if required, while non-medical centers adhere to legal guidelines (all required for affiliation with the major national pregnancy center networks).

The abortion lobby doesn’t like what the scientific literature shows about risks to women’s health following abortion, which they typically dismiss as “pseudoscience,” as was demonstrated by an assistant professor from the University of Wisconsin in Cosmo. The fact remains that pregnancy center client resources addressing abortion (surgical and chemical) risks, fetal development, and sexual risk avoidance and other topics are medically referenced and reviewed by national-level experts.

This rejection of scientific findings now extends to the Abortion Pill Reversal protocol. The same professor noted above also maintained the protocol is “not scientifically proven to work.” This is disproved by the reversal of some 261 chemical (mifepristone-initiated) abortions following the progesterone-based Abortion Pill Reversal method, as documented last year in the peer-reviewed journal Issues in Law and Medicine.

The Abortion Pill Rescue Network indicates that more than 500 babies have now been born as a result of the network’s efforts. One of the protocol’s top critics admits it makes “biological sense,” and one pro-abortion researcher even said he’d advise his own daughter to take similar steps.

The use of young activists to attack pregnancy centers and their work has only accelerated. The Cosmo article reports, “Recently, Advocates for Youth and other organizations held a week of action, during which hundreds of students researched and exposed the fake clinics near or at their schools and strung up banners to spread the word that they’re not legit medical facilities. Others are petitioning their universities to limit the ways CPCs can advertise on campus.”

The truth is neither sinister nor complicated: Pregnancy help centers meet the need for abortion alternatives on or near college campuses because abortion businesses often target college students and because women experiencing unexpected pregnancy deserve compassionate help. Partnering directly or indirectly with colleges, centers look for ways to support young moms and couples with the resources necessary for women to finish their education and maintain their own and their child’s health. In addition, the STI/STD testing and treatment and related education help to protect women’s reproductive health through a holistic health paradigm.

Stalwart directors like the one at the Culpeper Pregnancy Center in Virginia set high standards. Genuine clients at these centers report astronomical satisfaction with the centers’ work. Smearing the centers physically mirrors the politically motivated smears of activist groups who are losing ground every day to these selfless champions for life.