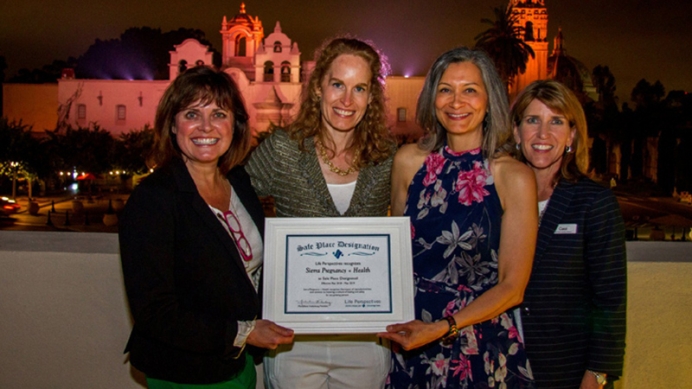 New training and implemented techniques plus a new location have opened doors of opportunity for a California pregnancy medical clinic, earning the organization a significant award earlier this year.

Sierra Pregnancy + Health Center in Roseville was honored in May with the first-ever ”Safe Place Designated” award by Life Perspectives (LP). Established 18 years ago, LP, based in San Diego, trains pastors, counselors, pregnancy center staff, and others who deal with the issue of grief due to reproductive loss.

“We want to establish a culture of safety, a culture of care, and set people on a trajectory of healing,” said LP’s president and CEO Michaelene Fredenburg. “We know how important the work of pregnancy centers is—we can provide the training and tools. Reproductive loss is, unfortunately, very common and impacts many people: women, men, and family members.”

“The reproductive loss could be from miscarriage, stillbirth, abortion, or infertility,” said Trisha Lewis, Sierra’s President and CEO. “We have patients who experience these things—it’s more crisis management, giving them tools (for healing).”

According to a press release sent out by Life Perspectives, a Safe Place Designated organization “is one that recognizes the impact of reproductive loss and commits itself to fostering a culture of healing and safety for any grieving person.” Such an organization “is committed to becoming a leader in its community by paving the way to healing for men and women who suffer in silence.”

Tweet This: A "Safe Place" recognizes the impact of reproductive loss & commits itself to a culture of healing for those grieving. @SierraPregnancy

Many who experience abortion keep that secret, often for decades. Since hearing Fredenburg speak at a conference and being trained under her, Lewis and her center have taken steps to change the language staff speaks as well as the written words on intake forms and on the center’s website. All have made a significant difference, said Lewis.

“There’s power in language change,” she said. “I don’t often say ‘abortion,’ I say, ‘termination of pregnancy.’ We don’t say ‘purity’ or ‘abstinence,’ we say ‘intentional sexuality.’ We’re coming at it with this language change to really minister to the woman where she is.”

As a result, doors have opened for the center and the women they serve.

“The word ‘abortion’ is supercharged—people have a strong opinion one way or the other,” she said. “The term ‘abortion recovery’ or ‘post-abortive’—these are labels. Do we say, ‘I am, or she is post-fat?’ Even churches don’t want to talk about abortion. Calling it ‘Reproductive Grief and Loss’—everyone understands grief. Since we’ve changed our language, doors really started opening. In just the past four months, women call weeks after terminating their pregnancy (for healing), not decades.”

Located 20 minutes from California’s capital of Sacramento, Sierra began in 1999 as a pregnancy resource center. Lewis, who has led the organization for nearly four years, paved the way for Sierra to become a medical clinic two years ago. At about the same time, the organization moved to a new location, near a Planned Parenthood which dispenses RU-486.

According to Lewis, the number of patients Sierra sees increased significantly since these changes were implemented.

“We’ve seen a 63 percent increase (in patients),” she said. “Last year we had 500 visits and 1,500 to 1,600 services. That includes patients coming for materials assistance and parenting programs. Our goal continues to be to increase our medical services, including offering Abortion Pill Reversal in the future.”

Sierra found another way to establish a comfortable atmosphere and a bridge into the community: providing flu vaccinations.

“If they come for a flu shot, women feel more comfortable with us, and if they have an unplanned pregnancy they might think of us first,” Lewis said. “We’ve become more fluid in our services.”

Lewis is hopeful that she can help other pregnancy centers to make some of the same changes that have increased Sierra’s clientele.

“We also want to train others in the grief program—I want to give them (other pregnancy centers) more tools in their toolbox.” she said. “I want us to be a light on a hill.”

Already, that light is shining brightly with the clinic’s new Safe Place Designated award from Life Perspectives, presented at a fundraising event a few months ago.

“They were enthused to celebrate us because we were able to put what we learned into practice and we’re going to be training others,” Lewis said. “We feel really humbled.”

“It’s an honor to partner with Sierra Pregnancy + Health—they are wonderful!” Fredenburg said.