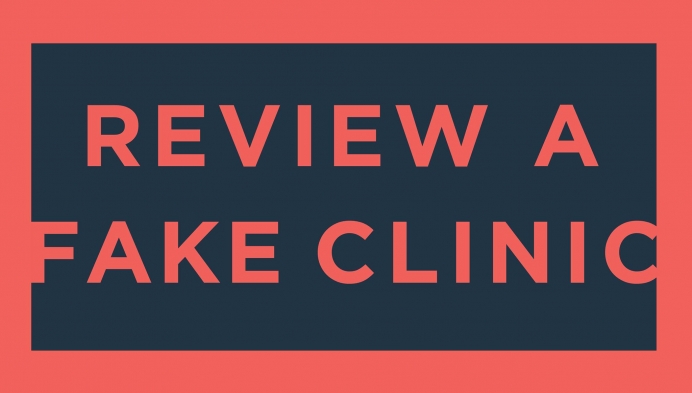 Under the guise of “Review Fake Clinics,” these activists started a campaign on Facebook which runs through September 18. The goal of the campaign is to smear local pregnancy help organizations via Google Reviews with false information, which has led to violence in the past.

Join our review campaign and let other folks know exactly what these fake clinics are!

Starting in June, on Wednesdays, we will post links to review a fake clinic. Your review can help pregnant folks and other potential patients know exactly what they are getting into with fake clinics. Remember, fake clinics directly advertise to pregnant folks, especially those that are vulnerable and in need of assistance. Help us blow their cover!

This campaign will last 16 weeks, one week for each fake clinic in West Virginia.

For more information on fake clinics and our campaign to expose them, check out our webpage www.womensmarchwv.org

Don’t forget to like, mark ‘useful’ and uplift other reviews that expose the sham!

Tips on writing your review:

When writing your review, keep in mind that you’re trying to reach people who may feel vulnerable. Be honest and respectful or your review may lose its legitimacy. Use the facts, these fake clinics are manipulating people. Be succinct. There’s only one abortion provider in WV, but maybe there’s one closer to you that’s in another state. Perhaps provide that information as well.​ 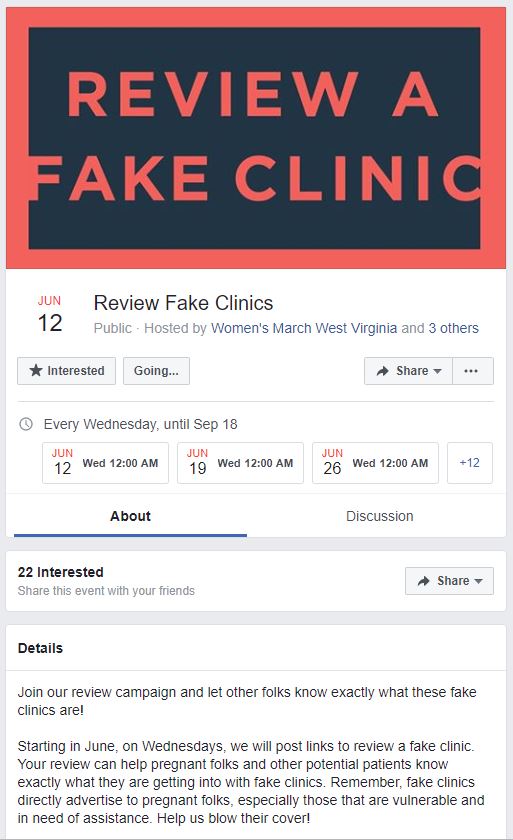 This 16-week Facebook "event" provides talking points as to how to write a negative review for a pregnancy help organization of which they may have never been inside. It also encourages reviewers to guide women across state lines in order to obtain an abortion circumventing state laws which require parental notification and a 24-hour waiting period.

While writing false Google reviews is not a new technique to pro-abortion groups, it takes valuable time away from pregnancy center staff caring for women in need. In spite of Google's new ad policy on abortion, the company takes pride in providing truthful reviews and will remove fake reviews. Likewise, Facebook allows people to report events like this one by the Women's March as "fraud or scam."

This defamatory technique has been done in the past and inspired the development of PregnancyCenterTruth.com, a website designed by Heartbeat International, a global network of 2,600 pregnancy help organizations. The site tackles the major talking points of abortion advocacy groups—like NARAL and the Women's March—which are designed to smear the life-saving work of pregnancy help organizations.

Pro-abortion activists know that women are rejecting abortion and Planned Parenthood, and a survey of consumer-based Google Local ratings bears out that reality in striking colors—especially when you compare the nation's largest abortion company's slew of negative client reviews to that of pregnancy help organization, where 99 percent of clients rave about the empowering services.

The overall goal of this campaign is clear: to undermine the pregnancy help movement so that they stop cutting into Big Abortion's bottom line.