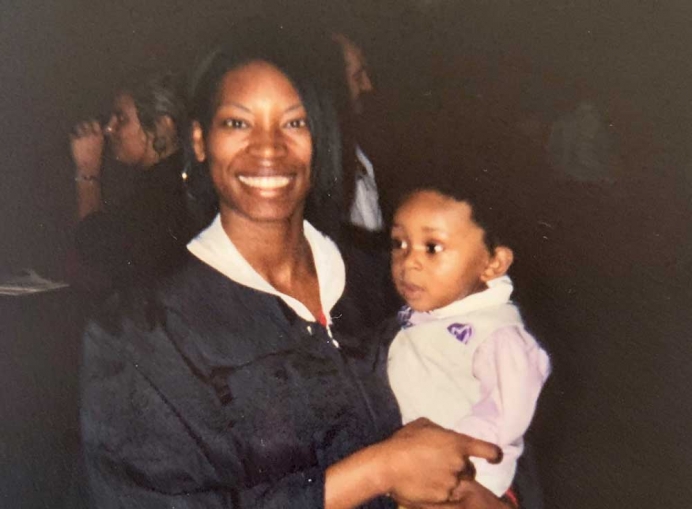 “I graduated with him in my arms”: New Mom Finds Empowerment at Louisiana Pro-life Center

Sharae Levine was one of the women interviewed by a local television station as part of a Mother’s Day’s story. She shared her thoughts about the hope and help she received at A Pregnancy Center and Clinic, one of two pro-life pregnancy centers in the Lafayette area.

In 2006, Levine found herself experiencing an unplanned pregnancy while in college and discovered assistance and encouragement when she visited the center.

“My first thought was abortion,” Levine said. “I had friends who encouraged me to go to A Pregnancy Center and Clinic. I felt at home. It was familiar, nonjudgmental, and educational, and I was able to let my guard down. They allowed God to do His work.”

Despite her fear about being able to finish college while pregnant, Levine found the encouragement and empowerment to do so. She gave birth to a baby boy in March 2007 and graduated from college in December of that year.

“I graduated with him in my arms,” she said.

Levine is the first person in her family to attend college and receive a degree. She went on to obtain her master’s degree in 2010 and plans to pursue a doctorate this fall. She is now the mother of three. Levine also volunteers at A Pregnancy Center and Clinic.

“They saved me,” she said. “They brought life into perspective for me.”

Lewis started her career as a volunteer and became a staff member as a counselor in 2004. She has led the organization as director since 2011.

“I’ve had a passion for women and for being in ministry for a long time,” she said.

That passion is reflected not only in the work done at the center, but in the responses of the clients. One woman recently left this note at the center:

“The way I feel about the Pregnancy Center and Clinic is that the people are amazing, and I would definitely say they seem to become more like a family to me. They are very informative and loving here. I had a thought about abortion and after coming here, I truly had a change of heart. I love you guys here!!!”

Tweet This: “I had a thought about #abortion and after coming here, I truly had a change of heart." #ProLifeIsProWoman

A Pregnancy Center and Clinic started 34 years ago. Meeting women’s needs — emotional, spiritual, and physical —and educating them on their pregnancy options as well as supplying materials like diapers and clothing, has helped thousands of women since the doors first opened.  A pregnancy help medical clinic since 2007, the center’s nurse manager performs pregnancy tests and ultrasounds, showing women the truth about life.

“The women appreciate the ministry. A change of heart also means a change of life,” Lewis said.

Located in southern Louisiana, Lafayette has a population of nearly 127,000. Volunteers aren’t the only support pregnancy centers need; prayer and financial support are also critical. However, fundraising events for A Pregnancy Center and Clinic are rare. Instead, community and individual outreaches are conducted and partnerships sought and obtained.

For example, in April, the center partnered with the local fire department for “April Showers,” a month-long event in which people from the community could donate and drop-off items such as diapers, bottles, baby shampoo, and diaper bags. 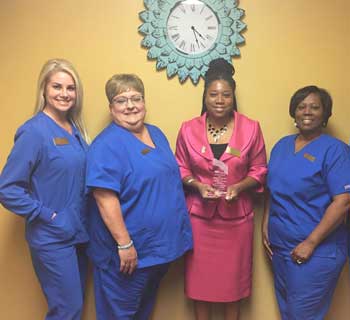 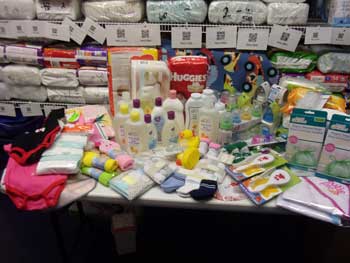 Photo courtesy of A Pregnancy Center and Clinic

“We don’t do conventional fundraisers, like banquets and walks. We engage the community and go straight to the donor,” Lewis said.

The organization’s important work and vital services have not gone unrecognized in Lafayette. In 2017, A Pregnancy Center and Clinic received a Women of Excellence award, given by the Lafayette Commission on the Needs of Women, a committee within the Lafayette Consolidated Government. This commission honored the center for improving the opportunities and lives of women and their families and having a positive impact on the community. An outstanding recognition for a pro-life pregnancy center while many abortion clinics, including the only remaining facility in Missouri, are investigated for health violations.

While abortion activists tout “fake clinic” and hurl other insults at pregnancy centers and pro-life advocates across the country, organizations like A Pregnancy Center and Clinic continue bringing hope and empowerment to women like Levine. The work being done on behalf of women experiencing unplanned pregnancies is vital, she said.

“I believe in pregnancy centers – they have a big impact,” she said. “It’s great to have places like these in a community in order to help people. I love helping people – that’s one reason I’ve volunteered for nearly eleven years.”