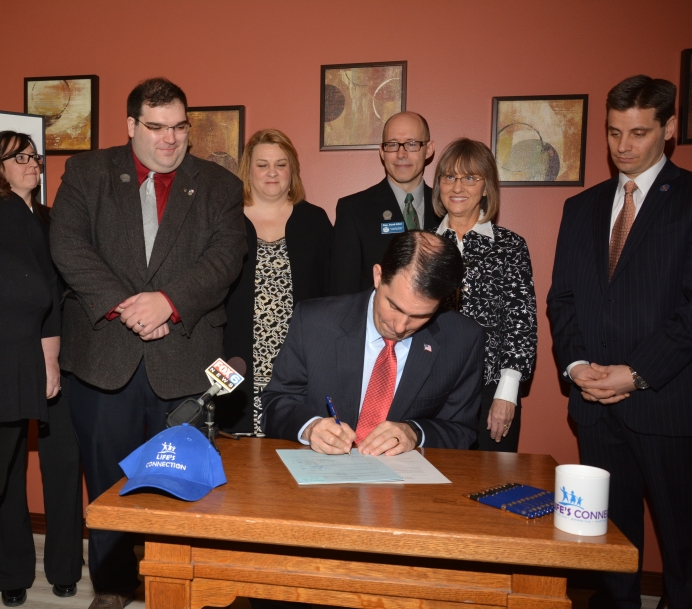 Just 400 feet away from one of the Planned Parenthood sites that will no longer rely on state taxpayers’ hard-earned dollars, the governor cut off funding to the abortion giant at Life’s Connection, a community supported pregnancy center.

While Life’s Connection, a pro-life pregnancy help medical clinic, is not a recipient of the newly revamped funding, the organization’s executive director, Krys Crawley, hailed the change as a major step forward for women in the state.

“Women and taxpayers in our state deserve better than abortion,” Crawley said. “This legislation has been crafted with the best interests of women in mind. Now, instead of our hard-earned tax dollars paying for abortion, we will be funding crucial services like breast cancer screenings, preventative care and mammograms—which Planned Parenthood does not provide.”

Gov. Walker’s signature on AB 310 and SB 238 was the final step in the state’s process of re-routing $3.5 million in Title X funding to 96 federally qualified community health clinics throughout the state.

His ratification also means Wisconsin is off the hook for $4.5 million by doing away with Planned Parenthood of Wisconsin’s artificially inflated Medicaid reimbursement rates.

A crowd of 50 came to see the historic signing of the legislation, which included seven members of the Wisconsin State Legislature, members of the media, representatives from Wisconsin Right to Life, and the board of Life’s Connections.

“It is truly astonishing that we have been given the opportunity to host Governor Walker and hope this will be a chance to share our mission with others," Crawley said. “We are just all reeling. It’s such an honor to be part of history.”

The historic event gave Crawley, her board and her staff the chance to show off their new site, which they opened in December as a second location. The organization had been operating in Mukwonago—a 25-minute drive away—but seized the opportunity to expand when Crawley drove by a “For Sale” sign just one door down from Planned Parenthood.

Crawley immediately contacted her board, which agreed to buy the building with the help of a $35,000 down payment provided by the local Knights of Columbus.

“We had numerous people pitch in so we could remodel, and it’s the most beautiful pregnancy medical center you’ve eve been in,” Crawley said. “It’s gorgeous and it’s wonderful for our clients. We had so many people chip in to make that happen.”

Now operating its second ultrasound-equipped pregnancy medical clinic, Life’s Connection hopes to triple its services in 2016 after having provided 1,801 separate services to 605 clients.

“It was a true blessing to see God's hand move mightily through the signing of this bill into law,” Rita Flores, the director of Life’s Connection new location said. “We stand united to be the voice of the unborn. I am awestruck with God's love.”

Gov. Walker, whose run as a GOP presidential hopeful was cut short last September, made it a point of his campaign to visit pregnancy help organizations.

Crawley and other pro-lifers throughout the state are optimistic that Wisconsin could join at least 10 other states in funding the work of community-based pregnancy help organizations—an effort that is currently underway in Georgia.

“With God, all things are possible,” Life’s Connections president Dan Miller said. “We thank Governor Walker, our courageous legislators and pro-life citizens for their conviction in getting these historic bills passed into law.”