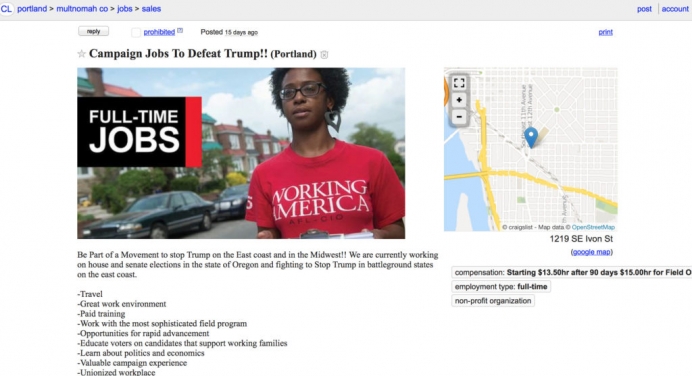 Before we point fingers at those who are protesting the results of the most recent election, all of us in the pro-life community must begin with some reflection.

Eight years ago, when abortion-proponent Barack Obama won the White House, the pregnancy help community took our grievances to the streets. We smashed windows. We stopped traffic. We sought to overturn the results.

Ummm, no. We did not. In the days after the 2008 elections, we went back to work to serve those who needed us most. We had no time for “taking it to the streets” (with all due respect to the 1976 song by Michael McDonald and the Doobie Brothers).

Such is not the case for Planned Parenthood today. Apparently, the abortion giant has plenty of time on its hands, and plenty of money.

It seems Planned Parenthood’s Community Outreach Group was paying for protestors to go full Stompy Feet over the election of Donald Trump. If you are interested in making up to $1,600 per week, Planned Parenthood needs you to go outside, wail and bewail, hold up a sign and perhaps destroy property (is there a bonus for that?) in an effort to keep its federal funding.

Planned Parenthood of course, will deny any tax dollars are being used for these protests. These are “private funds,” right? And perhaps they are. But no one can deny our tax dollars (well in excess of $500 million per year) pour into Planned Parenthood’s coffers, freeing up “private” funds for its massive political action machine.

And this machine is more than happy to pay $15-18 per hour to Stompy Foot Protestors-for-hire in Boston.

It’s rich, isn’t it? Planned Parenthood was founded by a eugenicist and racist (and Hitler devotee) in Margaret Sanger. This is not even open for debate as the evidence is overwhelming. And now, the very organization she founded is paying protestors, some of whom will likely scream that Donald Trump is a racist and a Hitler wannabe.

I’m no Donald Trump defender. Anyone can read my past columns and find my reservations over his apparent pro-life conversion, and at times, his defense of even Planned Parenthood (“They do good things”). I am not sure how Donald Trump will govern; we shall see.

But surprisingly, Mr. Trump could become the president who finally brings down Planned Parenthood.

Tweet This: Want to save $553 million a year, @SpeakerRyan? Let's start here. @KirkWalden

He now has every reason to do so. The Trump administration, through the Center for Medical Progress, is the first declared pro-life administration to have video evidence of Planned Parenthood’s illegal actions regarding the sale of human body parts.

Maybe it is time we forced Planned Parenthood to “do good things” on its own, without living off the federal dole.

Is the time drawing near? Conservative pro-life Gov. Mike Pence, our Vice President-Elect, heads the transition team. Look for Dr. Ben Carson to play a role in health care and Planned Parenthood discussions as well.

And House Speaker Paul Ryan, a cost-cutter, will be a key player in writing the first budget as the Trump administration takes control. Want to save $553 million Mr. Ryan? We have an idea.

Another thought, floated by many, including Matt Walsh of The Blaze: Take that $553 million and fund those organizations which truly assist women in need. Pregnancy Help Organizations don’t have a habit of asking for much in taxpayer assistance (most never ask at all), but if the $553 million must go somewhere, giving each of the 2,600 pregnancy help locations across the country an average of $230,000 could help a lot of women.

Once the story of Planned Parenthood’s plan to hire protestors got out, many—if not all—of the ads were pulled. I guess Stompy Feet are fine until someone recognizes who funding the mayhem.

But the truth is out there. And it is time someone asks, “If Planned Parenthood has the money to hire rabble rousers, does it really need our tax dollars?”

Tweet This: If #PPAct has $$ to hire rabble rousers, why do they need our taxes? @KirkWalden h/t @stevengberman