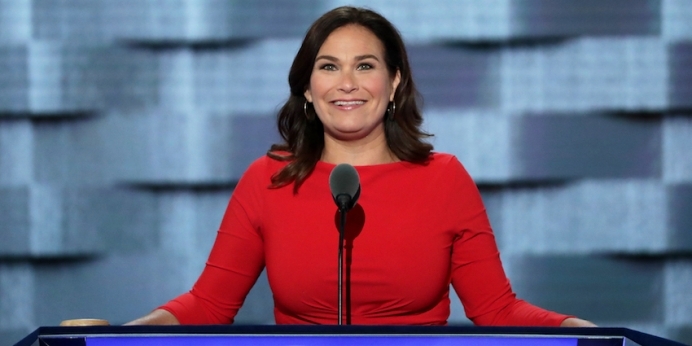 NARAL president Ilyse Hogue could throw her hat in the ring to become DNC party chair.

NARAL, the DNC, and the Rise of the Aborticrats

How tone-deaf is the Democratic Party? In the wreckage of the 2016 election that evicted them from the White House and left them with minority representation in both houses of Congress, the answer seems to be—quite a bit.

As in, tone deaf enough to entertain the idea of appointing NARAL head honcho Ilyse Hogue as the new leader of the Democratic National Committee. Yes, that tone deaf.

Reported earlier this week at The Hill, Hogue, who has led the nation’s top abortion advocacy group since 2013, has been asked to throw her hat into the ring as the party decides who will set their next direction following an election cycle where voters roundly rejected the left’s radical policy proposals, including abortion on-demand at all stages of pregnancy and forcing taxpayers to foot the bill for abortions both at home and abroad.

Expecting a big victory with Hillary Clinton, the party that draws its very identity from the ideal that the will of the people—“demos”—should rule, has been sent a message that the “people” have had enough.

While the big news is President-Elect Donald J. Trump’s surprising victory, Democrats also came out of Election Day with minority totals in both houses of Congress, and brought its tally to 919 state-level seats lost since President Barack Obama was sworn into office in 2009.

Now, the party is scrambling to name its third chair in less than six months—the previous two having been dismissed in the midst of scandal and corruption.

Shambles, in other words. Even with the benefit of an overtly biased mainstream media, the overwhelmingly influential film and television industries, and an outgoing president with an historically high 57 percent approval rating in his last days in the White House, the left’s radical legislative agenda is eight years deep into an all-out rejection by the American people.

On the other side of that stunning loss, Democratic congressional leaders find themselves in the unenviable position of choosing their next national chair, which was vacated by Florida Rep. Debbie Wasserman Schultz this summer amid revelations of her corrupt role in rigging the primary in Clinton’s favor.

Appointed by President Barack Obama to lead the party back in 2011, Wasserman Schultz was relieved this summer by Donna Brazile, who then was revealed to be every bit as corrupt as Wasserman Shultz in the lead-up to the election. WikiLeaks exposures showed she leaked questions to Clinton’s camp on two separate occasions prior to debates with primary opponent Sen. Bernie Sanders of Vermont.

Not to be lost in the scramble is the fact that, when both Wasserman Schultz and Brazile were sabotaging the Sanders campaign, Clinton had already been tabbed as Planned Parenthood’s pick—marking the first time in its 100-year history it had endorsed a candidate in the primary season.

That Hogue should be anywhere within 50 yards of the conversation should cause any Democrat—especially those who considered Clinton a roundabout pro-life candidate—to demand answers as to why their representatives are more beholden to the will of the abortion industry than to that of the people.

In fact, in many ways, it seems that’s exactly what the 2016 election meant. Yet, Hogue’s involvement seems a neon sign indicating more of the same. Having gambled big on wedge issues like abortion, and lost, Hogue embodies a “double-down” approach that brings more chips to the roulette table where the Democrats have been losing their shirts since 2009.

Tweet This: @NARAL boss @ilyseh embodies a double-down approach out of step with U.S. voters #prolife

The divide between the Democratic Party’s leadership and the American people is uniquely illustrated by abortion views. In a 2016 Knights of Columbus/Marist Poll, for instance, only 22 percent of respondents were in favor of legalized abortion beyond the first trimester—compared to a combined 52 percent who were either opposed to all abortions or only in so-called exceptional cases.

Hogue, who bragged about her abortion during at keynote at the 2016 Democratic National Convention this summer—citing the out-and-out lie that 1 in 3 U.S. women have abortions before age 45—heads an organization behind a long-term strategy of untethered attacks on pro-life pregnancy help organizations, the latest of which, in California and Illinois, require community-funded nonprofits to refer their patients (either directly or indirectly) for abortions.

Not only do the laws in California and Illinois trample the free speech and religious freedom rights of both the pregnancy centers, medical providers and the clients they serve—by depriving those clients of a right to access life-affirming support—the policies advanced by Hogue’s NARAL are out of step with the majority of Americans who oppose forcing pro-life doctors, nurses or organizations to fund or participate in abortions.

If abortion is the sole purpose of Democratic Party leaders—so much so that Planned Parenthood and NARAL not only both get a keynote address at the convention, but serve as party leaders-in-waiting—why not split off and start a new party expressly committed to the heart-and-soul of an abortion-centered agenda?

Truly, with the exception of abortion, Democrats and Republicans agree almost entirely on the outcomes we want—life, liberty and the pursuit of happiness—we’re just in the process of hashing out the best way forward to those goals. Abortion is the lone exception, since it’s actually the outcome where we so strongly disagree.

Proposing leadership-by-abortion, the Aborticratic Party would have but one platform, leaving the rest of us to wrangle over actual solutions and policy proposals as two rational policy-keepers in a three-party system.

Tweet This: @ilyseh as DNC chair would mark the death of Dems, rise of Aborticrats #prolife

If Hogue were appointed, even the pretense of the “demos” leading would be gone forever. That mantle of leadership will have passed officially, undeniably, to the abortion industry, marking the end of the Democrats and the beginning of the Aborticrats.

Hogue, NARAL and the abortion cartel have very little in common with the voters they now wish to represent. It will be telling, for the soul of the Democratic Party, to see just how much traction her bid gains.