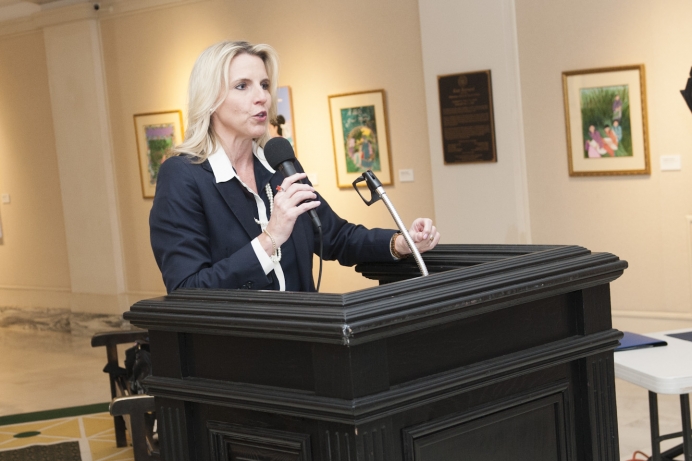 A state lawmaker in Oklahoma has proposed a change to a controversial portion of its Humanity of the Unborn Child Act, narrowing a pro-life signage requirement to apply only to abortion facilities throughout the state, it was announced Friday.

The bill, which aims to inform and educate Oklahoma citizens on fetal development and the existence of community-funded pro-life alternatives to abortion through a multi-faceted campaign, had required most businesses throughout the state to post pro-life signage in their restrooms.

Sen. Griffin’s proposed changes, which divert more of the bill’s focus to a social media campaign, will be on hold until legislators reconvene Feb. 6.

“The goal remains the same—to let women know they have options and available help to ensure they receive the care they need so their babies will be born healthy, whether they decide to raise their babies themselves or choose adoption,” Griffin said in a press release.

Signed into law by Republican Gov. Mary Fallin in June, the Act is an effort to spread awareness both for the sanctity of human life and the availability of life-affirming alternatives to abortion throughout the state.

The legislation proposes to create a website that lists state-approved pro-life pregnancy help centers, empower public school nurses to better assist pregnant teens—referring them only to pro-life pregnancy centers—and utilize public service announcements in an effort to move toward “an abortion-free society.”

Tweet This: #Oklahoma to tailor #prolife signage law. Will apply only to #abortion clinics.

The sticking point prior to Sen. Griffin’s change was the law’s signage requirement. The signage applied to “each facility in [the] state which is open to the public” and read as follows—including a link to the state’s to-be-constructed website:

There are many public and private agencies willing and able to help you carry your child to term and assist you and your child after your child is born, whether you choose to keep your child or to place him or her for adoption. The State of Oklahoma strongly urges you to contact them if you are pregnant.

Opponents to the signage requirement opposed it on primarily on fiscal grounds, with groups estimating the total cost at $2.1 million statewide—plus another $225,000 burden on the state’s hospitals.

“We don't have any concern about the information they're trying to get out to women about their babies and their pregnancy. This is just the wrong way to do it," Jim Hooper, president of the Oklahoma Restaurant Association, said earlier in the week. "It's just another mandate on small businesses. It's not just restaurants. It includes hospitals, nursing homes. It just doesn't make sense."

While the bill’s amendment now includes a zeroed-in focus on providing life-affirming information at abortion facilities, the changes to the signage requirement parallel laws in California and Illinois —both of which are trying to force pro-life pregnancy centers to advertise and/or refer for abortions.

Both California and Illinois are being fought on First Amendment grounds in court, while the Oklahoma legislation is due back for at least the current amendment. All three, however, could eventually test the limits of the government’s authority to enforce compelled-speech legislation.

“While the measure is pro-life, the promotion of prenatal and care services addresses a major health issue in our state,” Griffin said. “It was never intended to be a burden on businesses or health providers. Changing to a social media campaign will actually broaden the reach and make linking pregnant women to services even more visible.”