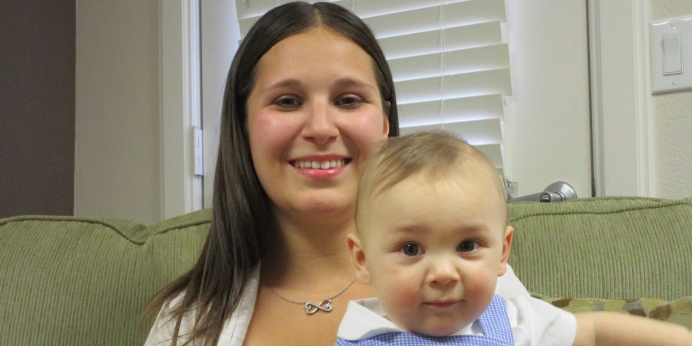 Hillary was empowered to choose life for her son, Adam Photo Courtesy: A Woman's Friend

From Heroin to Heroine: Mom Chooses Life with Help from a Friend

Pregnancy help organizations are becoming increasingly well-known in their communities for their tireless work to help each woman facing a crisis pregnancy and provide her with life-affirming alternatives to abortion.

Such was the case at A Woman’s Friend Pregnancy Resource Clinic in Marysville, Calif., when a client named Hillary walked through their doors in March of 2014.

Addicted to heroin and homeless, Hillary found herself pregnant. Hillary felt she was beyond all hope of caring for her child. Feeling that abortion was her only option, Hillary made her visit to A Woman’s Friend to confirm her pregnancy with a free ultrasound, and to get help accessing state-run Medi-Cal health benefits to pay for the abortion at a local Planned Parenthood.

As it turned out, Hillary would end up receiving far more help than she could have imagined, walking through the doors that have been open to women since 1987, and is one of over 1,000 U.S. pregnancy help organizations offering free ultrasounds.

“They were actually all filled up for ultrasounds that day,” Hillary said, recalling her consultation, “But I think that [the client advocate] knew that I needed that ultrasound. They got me in that day, a couple of hours later.”

During that first session, Carol Lawson, Hillary’s client advocate at A Woman’s Friend scheduled her for a free ultrasound, and continued to offer support, minister to, and pray with Hillary—despite her skepticism that she would be able to change enough to take care of a child.

“I remember telling my client advocate, ‘I can’t imagine how I’m going to stop using heroin for my baby. I can’t even do it for myself, ” Hillary said.

Seeing her child on the ultrasound screen, and gaining a better understanding of the growing life she was carrying during her initial visit, Hillary had been even more impressed with the genuine compassion the staff showed to her at the appointment.

Tweet This: "I can't imagine how I'm going to stop using heroin for my baby. I can't even do it for myself." #prolife

While she had expected the staff at the faith-based pregnancy help center to judge her, or try to aggressively evangelize her, the caring tone and follow-up care she received left a lasting impression. More importantly, it gave Hillary an opportunity to slow down and consider her options.

Looking back, Hillary recognizes how much of a difference it made to see her child on screen.

“Many of our clients don’t realize the tiny miracle of life growing inside of them until they see the baby’s picture on an ultrasound,” Carol Dodds, executive director of A Woman’s Friend, said. “Once they see the heartbeat, they know without a doubt that this is not a blob of tissue, but rather a little human being relying on them for sustenance and protection, that the decision they make will save or end a life.”

Hillary’s initial visit empowered her more than she had expected, but she would immediately face a significant challenge on the road to embracing motherhood.

Just a week after her initial visit, Hillary was arrested, and wound up spending 60 days in jail. As she would find out, that wouldn’t stop A Woman’s Friend’s client advocate from pursuing her.

“My client advocate stayed in touch with me that entire time,” Hillary said. “She wrote me letters just to let me know that, whenever I was ready to come back, she would be excited to see me.”

Empowered to choose life for her child while behind bars, Hillary returned to A Woman’s Friend to seek more help once she was released from custody. Taking advantage of the center’s parenting programs and material resources such as diapers and baby clothes, Hillary has found a long-term network of support in a place she least expected it.

Even now, the local pro-life community continues to extend help to Hillary and her 9-month-old son, Adam. In July, St. Isidore Catholic Church in Yuba City—just across the river from Marysville—held a surprise baby shower for her, giving her diapers, clothes and other essentials.

Thanks to her interaction with what she calls the “Christ-like” staff at A Woman’s Friend, Hillary has now been drug-free for 17 months, has become part of a local church, and she and her son are living with her mother. The new mom also has plans to start school in the fall to become a Certified Nursing Assistant.

Following her experience with the center, which serves over 1,600 clients each year, Hillary also referred another young woman in a nearly identical situation to A Woman’s Friend. She also hopes to return to the clinic to volunteer.

“The best thing that I can do is share my story, after everything I went through,” Hillary said.