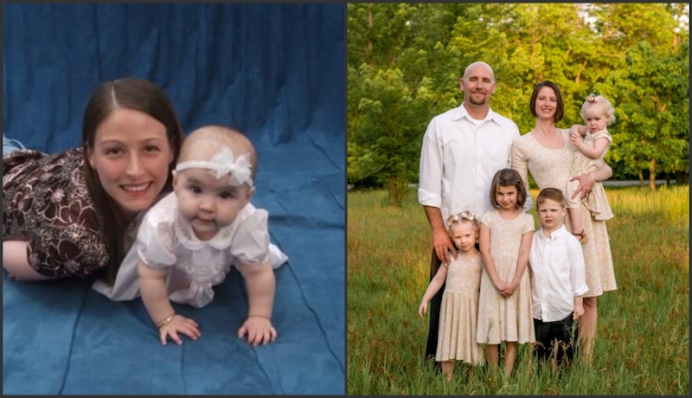 After refusing pressure to abort, Angi was the third of 24,000 women (and counting) to choose life for her daughter with the help of Heartbeat of Miami Photo Courtesy: Angi Stillwell

Tricked into an Abortion Appointment, How One Mom Rescued Her Daughter

Like so many women, when I found out I was pregnant, my initial reaction was shock. I could not believe I was pregnant. But unlike so many others, my shock had everything to do with the joy I was feeling—though that initial joy wouldn’t last.

In fact, it would take walking into (and out of) an abortion clinic for me realize just how desperate my circumstance was. And it was there—in the most unlikely of places—that God put me on a path that would empower me to rescue my daughter and embrace the rescue God brought me through the precious blood of His Son.

I had been told early in life that I wouldn’t be able to conceive due to some medical issues, so imagine the delight that swept over me when I learned I—of all people—was pregnant.

In fact, my elation blinded me to the reality that my boyfriend saw this pregnancy not as a blessing, but as a “problem” to be dealt with through abortion.

Maybe that’s why I didn’t understand what he meant when he told me he’d made an appointment at a doctor’s office. I assumed he was stepping up to the plate to support me, but I couldn’t have been more wrong.

When we arrived for my appointment, I didn't see any signs identifying a doctor's office, and I started to feel a little uncomfortable. We walked up a flight of narrow and dimly lit stairs with stains on the carpet. I was scared. This didn't look like a doctor's office to me.

Once inside, I looked around to see several women in the waiting area, all with the same solemn, sad look on their faces. It felt like there was a heavy air of despair dominating that room. The lady at the check-in window casually pushed a clipboard with some papers on it towards me and told me to sign them.

I looked at the letterhead, and realized where I was. My boyfriend had brought me to an abortion clinic.

I shoved the clipboard back under the glass divider at the receptionist and said, "I'm not signing anything!" I looked at my boyfriend and screeched, "This isn't a doctor's office! You've brought me to an abortion clinic!"

Can I at Least See My Clump of Cells?

All of the women in the waiting room were now looking up at me. I must have been a sight to behold. I was visibly aggravated. My boyfriend tried to put his arm around me to comfort me, but I pushed him away. Immediately, two women came out from a door and asked me to come with them down a hallway.

I refused: "I don't want to do this! I was just supposed to have an appointment to get an ultrasound!" They told me that they understood, that it was just time for my appointment. I didn't need to sign anything, and we could just go do an ultrasound.

Looking back, I realize they needed to get me away from the other women as quickly as possible before I made any more of a scene. Business is business, after all.

So, I agreed and followed them down the hall into a small, stark room with a table and an ultrasound machine. The technician said, "You're about six weeks along, that's good. You'll only need to take some pills."

Even in a small room, the ultrasound monitor was tiled away from the table so that I couldn’t see what was on the screen. I asked if I could see my baby.

"Oh honey,” she said. “There's nothing to see, it's just a small clump of cells. We don't have much time. If you wait too much longer you will have to have a procedure instead. The pills are the easiest way to take care of your problem, sweetie."

Tweet This: I realized where I was. My boyfriend had brought me to an #abortion clinic. #prolifegen #prolife

I felt nauseous. I looked over at my boyfriend and told him we needed to leave immediately. She escorted us out of the room, and we continued down the hall toward a back stairwell. It was like any other staircase, but there were dark, ominous stains on the carpeted steps.

It was then that I realized: those stains were made by women leaving the clinic, vomiting on their way out the back door and onto the street.

An Ultimatum: Either Baby or Me.

I was so upset. I was hurting so much on the inside and I felt so very torn. Even though I was so happy to be pregnant, I loved my boyfriend and I wanted him to be happy too. Besides, he was the only person I knew in Miami. I had moved to Miami from another state just to be with him. I felt so alone, so vulnerable.

Within a week, I told him that I wanted to keep the baby. He told gave me an ultimatum: I could either keep him or keep "it". My boyfriend went on to tell me that no one was going to want me if I had a child as baggage. As he told it, I was on my way to becoming a poor and bitter lonely woman. Besides, our child wouldn't have a chance at a good life.

Even in the middle of this gut-wrenching conversation, he made a promise. If I would just have the abortion, we could set a date to be married. Then we could get pregnant again and do it “the right way.”

I was desperate, I was confused, and I didn't know what to do. I felt like I couldn't do this alone, and I didn't want to lose him. Even after that traumatic experience at the abortion clinic, I actually started to consider abortion. I felt trapped.

I went online, looking for more information about abortion. That’s when I stumbled across the website for Heartbeat of Miami—which had just opened a couple of weeks earlier. I called and made an appointment to meet with Jeanne Pernia.

When Jeanne shared her story with me, I realized I wasn't alone.

I will never forget how she made me feel. For the first time since I found out I was pregnant, I felt like everything was going to be okay—even if it meant I’d lose my boyfriend.

I suddenly became aware that I had the right to decide what I wanted to do. I didn't need my boyfriend’s permission to “accept” my baby, and it was his choice if he wanted out. If I wanted to keep my baby, he could not force me to destroy the precious life that was blossoming inside of me.

When My Life Turned Around

I felt empowered, supported and hopeful. Of course, that didn't mean it was going to be easy. Jeanne and I discussed this and my feelings—fear, uncertainty, so many emotions that sweep over a woman who is faced with an unexpected pregnancy.

Jeanne helped me work through these feelings, and helped me anticipate how I’d feel in the coming months. That gave me the strength to resist the temptation to take what had been first offered to me as my only option when pressure and anxiety bore down on me.

Jeanne encouraged me to trust God and His plan for my life. So I did.

In God’s plan, He had allowed a thief to break in steal Heartbeat’s ultrasound machine just a couple of days before I visited the center. I was disappointed I wouldn’t be able to see my baby on that visit, but Jeanne handed me a plastic model of what my baby looked like at that point in my pregnancy.

It became so clear to me that this baby was so much more than the small clump of cells in the abortion clinic’s lies. This was my child. I still carry that little plastic fetal model with me today to remind me of how God worked to rescue my daughter and I.

Tweet This: After fleeing #abortion clinic, she found help to save her life and her daughter's. #prolife

When I came back for an ultrasound appointment—fetal model in hand—I realized why the abortionist did not allow me to see the screen. Seeing my daughter moving around inside of me completely sealed the deal. There was no way I was going to abort my baby.

Today, Heartbeat of Miami has rescued 24,000 babies and their mothers from the tragedy of abortion. My daughter and I were No. 3 in the life-saving history of this incredible ministry.

Thinking back to those early days, even though I was often afraid, I chose to trust God and let Him lead me. I kept myself very busy learning to be a good mom and working hard to provide for my wonderful daughter.

When my daughter was still a baby, I met the man that would become my husband. He had a daughter of his own and we married a year later. Our family has continued to grow, and we are now a party of seven. Being "Mom" for our family is a privilege and a pleasure, and for that I am so very grateful.

My daughter is an extremely bright and exceptional little girl. She is thoughtful, clever and so full of life. I can't believe how close we came to missing out on her.

What would have happened if I hadn’t found Heartbeat of Miami? What kind of nightmare would I be living if not for their lifesaving help? My life turned around completely because of this vital lifeline, which is truly staffed by angels here on earth.

It’s incredible to think that I’m just one of 24,000 women given the opportunity to experience this wonderful life called motherhood because of women like Jeanne, who God is using every day to rescue lives like ours.