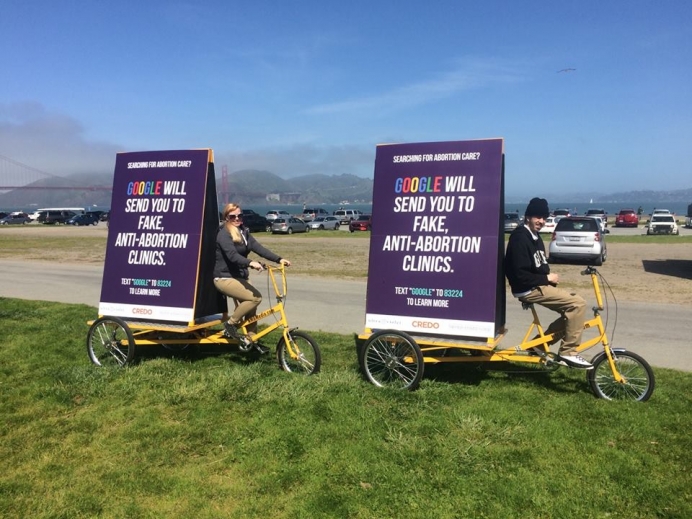 Abortion Activists Harass Google Employees on Their Way to Work

In recent years, abortion activists have ramped up a campaign to tar and feather the country’s 2,750 pregnancy help centers as “fake clinics.” From protesting the non-profits in creepy costumes to smearing them in Google reviews, they’re throwing everything at them to see what sticks.

The accompanying photo depicts a couple of paid cyclists with sandwich boards informing employees, “GOOGLE WILL SEND YOU TO FAKE, ANTI-ABORTION CLINICS.”

The absurdity of the photo itself makes me want to facepalm, but the translation is pretty simple and shows how we’re winning: As Jay Hobbs puts it, Pro-Life Centers are Kicking Planned Parenthood’s Tail on Google.

“Our goal with the campaign is for Google to stop being complicit with these clinics, stop running fake abortion clinic ads,” Roland told Business Insider.

Apparently actual competition is just too difficult for the abortion industry. So instead of competing with pregnancy centers in the digital marketplace, they turn to name-calling and harassment. To be fair, I guess I’d have a wild sense of entitlement too if the government regularly forked over half a billion taxpayer dollars to me.

It’s campaigns like this that prove just how out-of-touch the abortion lobby is with the women they claim to help. They turn a woman’s simple search for information into a circus, harassing the everyday public with angry, tone-deaf messages in hopes that they can simply bully a company into submission.

But beyond the sheer outrage of the matter, let’s consider the heart of it. Google searches are saving lives and helping women in need. Consider “Jennifer”, who found Option Line—the nation’s only fully staffed, bilingual, 24-7 pregnancy helpline—when she needed help.

Or consider Katrina, who was able to reverse her abortion after a simple Google search lead her to Abortion Pill Reversal and eventually, a pro-life pregnancy center. Her baby boy, Gabriel, is a living, breathing reminder of why Google shouldn’t skew search results against the pregnancy help community.

Even Planned Parenthood tells women to “just Google it” when looking for information on prenatal care, adoption, or any other life-affirming services the abortion business doesn’t provide.

If abortion activists had their way, Google search results would land women right back at Planned Parenthood with abortion as their only choice.

And that’s where whatever remains of the “pro-choice” mantra is completely obliterated.

The fact that the abortion lobby would invest so much time, money and resources into conspiracy theories and censorship of this magnitude is telling.

And really, it makes sense. After years of dealing with explosive undercover investigations from groups like Live Action and The Center for Medical Progress, the abortion lobby has had enough. While David Daleiden was busy exposing Planned Parenthood for selling the remains of human children, NARAL decided they’d show the world something truly gritty...like, that many pregnancy centers are run by Christians.

As Huffington Post claims, these “faith-based clinics” are “dangerous as hell.”

The claim is laughable but it’s also tragically ironic, considering the very abortion facilities they defend aren’t just dangerous, they’re deadly. And yet, not a single person has died at the hands of a pregnancy help center. Not only that, as the Fourth Circuit Court of Appeals recently pointed out, the abortion lobby hasn’t been able to produce a single woman who has had a bad experience at a pregnancy center.

Perhaps that’s because 99 percent of women who’ve visited a pregnancy center report a positive one.

As outlandish as the abortion lobby’s hijinks have become, they definitely won’t be stopping anytime soon. While Google may not necessarily be a bastion of pro-life advocacy, the major corporation hasn’t caved to the demands of the abortion lobby, and I, for one, applaud them for that.