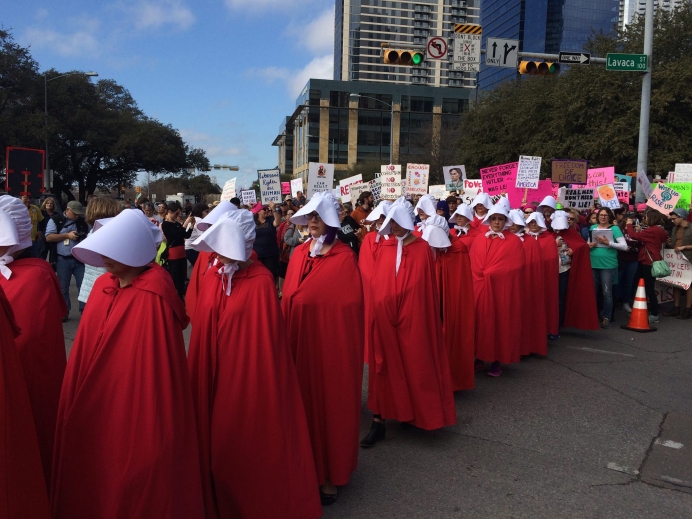 Apparently fearing an outbreak of forced surrogacy kick-started by a dozen area pregnancy centers, abortion fans in Austin, Texas, are doing their part to ward off the impending dystopian apocalypse.

Calling themselves “Texas Handmaids,” members of a small, but growing group are donning the now-familiar white bonnets and red robes to protest life-affirming help in Austin, both in front of the pregnancy centers themselves, and in other public areas around the city.

So far, the Handmaid’s tale in Austin has read far more like a comedy than a gloomy drama—especially when it comes to the group’s goal of scaring off donors from pregnancy centers.

In the past year, since the Handmaids started hectoring pregnancy centers, the one center most targeted—Agape Pregnancy Resource Center—has seen its donations skyrocket, including a doubling of in-kind gifts, Agape director Jo Markham said.

“God has used it for so much good,” Markham said. “We have become known in a good way. People who did not know about us before now know about us and are excited. God has just completely turned it around. What they meant for evil, God has used for good.”

With Agape adding a mobile ultrasound unit—which the Handmaids ever so creatively dubbed, “the Shame Mobile”— in early 2017, they had been the primary focus of the Handmaids heading into 2018.

Most prominently, the group protested during a year-end sales event at Henna Chevrolet—a large car dealership in Austin—holding up signs that read, “Agape Lies” and “Henna Helps FAKE Clinics.”

Starting in early January, the Handmaids shifted their focus to the larger Austin area, harassing pregnancy center donors both online and threatening to do so at their places of business.

Green, the only staff member at a small center that served 275 women last year, said she’s counteracted the Handmaids’ online harassment by encouraging donors and past clients to leave positive reviews on Facebook, Google and other online platforms.

But while Google Local’s user policy allows pregnancy centers to flag and remove reviews from users who haven’t been to their center, Facebook’s policy emphasizes quantity over quality.

One of several cities and states to try and force pregnancy centers to post signage driving away clients—a local ordinance was overturned by courts in 2014—Austin has long been an anomaly in a largely conservative, pro-life state.

Tweet This: How Texas Handmaids' #abortion supremacy campaign is backfiring in a big way. #prolife

But even with all that pregnancy centers in Austin have been through together, the latest opposition from the Handmaids has been a uniquely effective vehicle for unity in the pro-life community, Markham said.

“There have been little camps and every center was its own little kingdom,” Markham, who has been with Agape for 15 years, said. “But those walls have been smashed down. We’ve come together out of necessity. We’ve come to know each other and love each other and help each other. It’s been wonderful. It’s just one more good thing that’s come out of all this.”