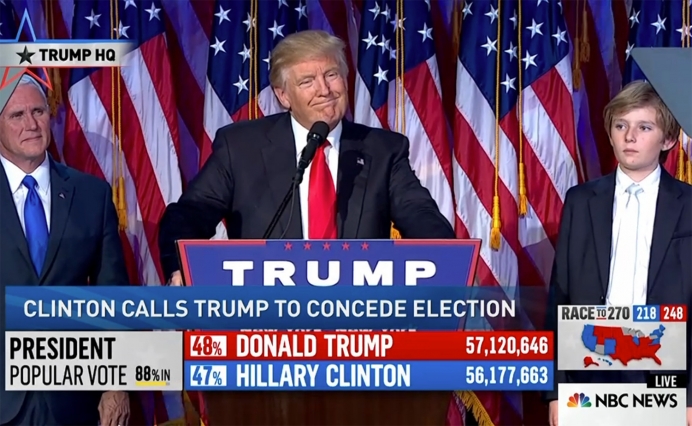 Hey did you hear the news? Apparently there was a great, big, beautiful—I’ll say it, “Yuuuuuge”—upset in this year’s election. Turns out, the United States has elected for its 45th President one Donald J. Trump.

Just as we predicted, right?

Well, turns out we—along with “they,” whoever “they” are—were looking at this whole thing upside down. Yes, there was a landslide of historic proportions. But no, it wasn’t Hillary Clinton standing atop the pile, but now President-Elect Trump stunning the world and rounding out a night where Republicans kept control of both houses of Congress.

Nobody outside of God himself is quite certain where all this is heading, but what is clear is that nobody talking or writing this morning had any idea what was going to happen at this time yesterday. So at least we’re all in the same boat.

As results came in late Tuesday night, a question started making the rounds among both the punditry and social media: “Donald Trump is our next president. What do we tell the children?”

Echoing that headline from The Los Angeles Times, in which the writer identifies five things she’ll tell her kindergartener and preschooler about the election, similar headlines appeared at the Huffington Post, The Washington Post, Slate.com and more, all asking the same question.

What do we tell our kids? As a father of three girls—kindergarten, preschool and newborn—here’s four suggestions, in no particular order:

Let’s be honest, shall we? The main question my kids have for me today is whether or not there’s still some candy left over from Halloween.

I realized that on the drive to school today with my kindergartener. We were less than five minutes away from the classroom, just pulling off the freeway when the horrifying thought struck her: “Dad, did you pack any candy in my lunch?”

As we tackled the harsh reality that, no, we weren’t going to turn around and go back to the house to grab a bite-sized Snickers for lunch, I noticed that her lack of perspective at 5 years old is remarkably similar to many who make a living talking politics.

Is America fundamentally different this morning than it was yesterday or last week? Highly doubtful. Did we just save America from the brink of everlasting torment and no-return? Not likely.

Did we just elect a man who singlehandedly represents the destruction of the United States of America, as The Atlantic editor David Frum breathlessly lamented as results rolled in? Next to impossible.

In the meantime, let’s tone down a bit on the hysterics. Kindergarteners across the land care much more about candy than politics, as they should.

We are exiles. That much is true. And by “we,” I mean Christians. Regardless of who won, or even who ran in the first place, we Christians have a fundamental identity as exiles, foreigners, strangers in a strange land.

Speaking to dispersed Christians in the first century, the Apostle Peter refers to his readers as “exiles” all throughout his first letter, penned to those who have “been born again to a living hope through the resurrection of Jesus Christ from the dead, to an inheritance that is imperishable, undefiled, and unfading, kept in heaven for you…” (1 Peter 1:3-4)

As those whose inheritance is not of this world, there is nothing the government can ever do—including trample over constitutional rights in places like California and Illinois—to deprive us of our inheritance. That’s what Peter means when he says it’s “imperishable, undefiled, and unfading, kept in heaven for you.”

Further, we exiles have been called to active duty as ambassadors of the great Kingdom to which we now belong. Peter spells this out later in the first chapter as he unfolds what will become a larger theme throughout his letter:

“And if you call on him as Father who judges impartially according to each one’s deeds, conduct yourselves with fear throughout your time of exile, knowing that you were ransomed … not with perishable things such as silver or gold, but with the precious blood of Christ, like that of a lamb without blemish or spot.” (1 Peter 1:17-19)

What I want my little girls to know more than anything else about this or any other election is the fact that, as Christians, we don’t belong to this world. We’re not beholden to any earthly throne or ruler, but to Christ himself, who ransomed us from futility with his precious blood.

No election can steal—or create—our joy. No candidate or ruler can take away that which only God can give, that which God alone can guard.

We don’t worship on Capitol Hill, but in spirit and in truth. That’s what it means to belong to a King and a kingdom that won’t be shaken every four years.

In terms of life lessons to be gleaned from Election 2016, few stand out as clear as the biblical truth that, when it comes to sin, you can run but you sure can’t hide.

Clinton, the first-ever primary candidate Planned Parenthood has ever endorsed, has likely seen the end of her political career after losing handily to Trump—who The New York Times gave a 16 percent chance of winning on the eve of Election Day.

Though explanations will no doubt abound in days ahead, the simple fact is, by the time voting day came, enough U.S. citizens had become so convinced of Clinton’s fundamental corruption and systematic abuse of power and public trust that they turned to Trump—a man known for his sharp dealing, lewd behavior and demonstrated dishonesty—as a solution to “drain the swamp.”

Along the way, folks like Cecile Richards and Devon Anderson have been sent a message along with the abortion industry’s candidate of choice. Richards, the CEO of Planned Parenthood, has gone overnight from planning just how she would use my family’s tax dollars to directly fund abortions, to the sudden realization that her outfit’s annual $500 million federal government handout is (hopefully) on the verge of termination.

Anderson, you’ll remember, is the soon-to-be ex-District Attorney in Harris County, Texas. She lost her reelection bid Tuesday night after spending the past year and a half enmeshed in a failed attempt to shoot the messenger rather than investigating Planned Parenthood’s complicity in the illegal selling body parts of aborted babies.

The chickens have come home to roost for Clinton and the Party that has sold its soul to the abortion industry, wielded federal agencies against political opponents, evaded any semblance of accountability for its own endemic criminality, incited violence at opponents’ campaign rallies for political gain, and leveraged political clout for personal monetary gain.

None of this is to say President-Elect Trump or anyone else is off the hook or somehow above the law. Rather, the opposite.

What is done in the dark will always be brought to the light, sometimes in an election, sometimes at the workplace, sometimes in the home, and sometimes only in the courtroom of heaven, but make no mistake, your sin will find you out.

My girls need to know this truth. Their sin will find them out, and so will mine. That’s why we confess, turn from our wickedness and receive by faith the grace offered to us in the finished work of Christ on our behalf.

Tweet This: "Your sin will find you out." 1 lesson from #election2016 to tell your kids.

Win, lose or draw, Tuesday night’s election results will go down in history as perhaps the biggest surprise in American electoral history. Heading into the final day, the USC/L.A. Times provided virtually the only polling data predicting a Trump victory.

Even Nate Silver at FiveThirtyEight.com, whose polling prognostications were attacked by The Huffington Post’s Ryan Grim as being rigged to favor Trump, still had Clinton at a 64.9 percent chance of winning late in the race.

Again, the fact that Trump outperformed the polls to an unprecedented degree speaks to the element of unpredictability. We just don’t know what’s going to happen until it happens. Or, as the late baseball Hall of Famer Yogi Berra so eloquently put it, “It ain’t over till it’s over.”

In the pro-life movement, we know that truth better than most. How many stories do we know where a woman was on the verge of abortion—minutes or seconds away—only to change her mind and rescue her child?

How many women like Angi are there, who was lured into an abortion clinic but found the strength to change her mind and stand up for herself and her child at the very last moment?

How many Tiffany’s are there out there, who found life-affirming help where they least expected it, and now can’t imagine life without their precious little boys and girls? How many victims of rape have made the courageous choice to carry their baby to term in the face of a culture that pressures them to abort?

How many moms like April have been to the brink of abortion and back, rescued by the discovery of a beating heart and a hand to help?

It ain’t over till it’s over. In the case of this election, whether or not that’s good news is in the eye of the beholder, I suppose, but the essential truth remains.

That’s a lesson I can tell my girls without reservation or apology.