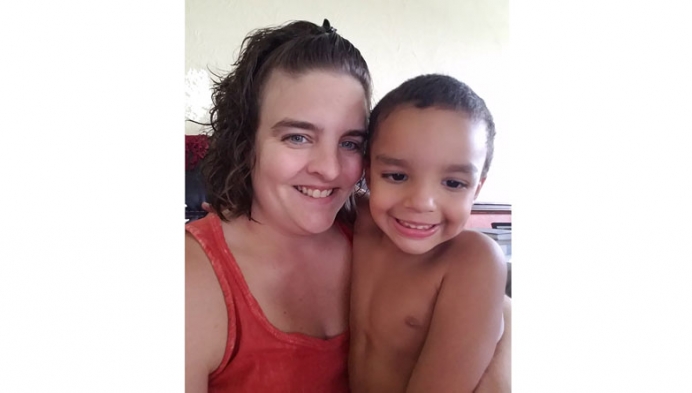 Jonathen, The “Crisis” Who Turned a Family Right-Side Up

It’s a weekday afternoon at the Pantovich home in the greater St. Louis area. Naptime for the youngest of Tiffany and Filip’s five boys, and time for the four oldest to tackle the last of their homeschool coursework for the day.

With the oldest 10 years old and the youngest on the verge of turning 2, the Pantovich home is rarely quiet. But what it lacks in serenity, it makes up for in terms of wrestling, jumping, climbing and the general pandemonium that characterizes most houses full of young boys.

It’s a setting Tiffany says would have felt every bit as foreign to her five years ago as her home address at the time. Back then, living in Germany, Tiffany and Filip experienced a crisis that seemed sure to end their already-fragile marriage and send the family into a tailspin.

Today, that “crisis,” is a rambunctious 4-year-old named Jonathen.

Stationed at Ramstein Air Force Base, the headquarters of the U.S. Air Force presence in Europe, Filip was deployed to Qatar, leaving Tiffany to care for the couple’s three small sons—including a newborn.

At a going-away party on base, Tiffany was taken advantage of by a trusted friend late in the night. When she awoke, she couldn’t remember what—if anything—had happened the night before, but a positive pregnancy test a month later left no doubt.

Tiffany was pregnant, and in addition to the fact that Filip wasn’t due back for another two months, the father of the child was of a different ethnicity. There could be no hiding what had happened.

Thousands of miles from home, Tiffany—at the time a nominal Christian whose pro-life convictions matched that of her minimal faith—had only one question: How soon could she get an abortion?

When she broke the news to her husband, he had the same response. The only question was when. With their marriage already very much in jeopardy before Filip’s deployment, abortion felt like a last-ditch effort to salvage their family.

“Honestly, I never really believed in abortion before that,” Tiffany said. “I always figured, ‘to each their own,’ and it wasn't for me. That was the first time that I ever found myself in a position to consider it as an option, and it was more out of fear for my marriage then it was for anything.”

Because legal abortions in Germany are generally performed at 12 weeks or earlier and only after a required counseling session at least three days prior to the execution of the procedure, one of Tiffany’s first calls was to Heartbeat Crisis Pregnancy Center, an on-base organization affiliated with Heartbeat International.

Newly appointed as the center’s executive director, Carrie Beliles had just returned from her first Heartbeat International Annual Conference. One of the workshops, “Answering the Hard Questions,” had been facilitated by Bri Laycock, director of Option Line, a 24-7 pregnancy helpline that has answered over 2.5 million calls since 2003.

It turned out, another workshop attendee had posed almost the exact same scenario as Tiffany’s. The advice from Laycock and other pregnancy center directors in the room had been threefold: Stay on the line. Keep the connection open. Take it a day at a time.

Now, it was Beliles’ turn.

“As I got to know Tiffany and listened to her story, God began to teach me to take one step at a time, one day at a time,” Beliles, who now serves as Heartbeat International’s International Program Specialist, said. “I wasn’t going to ‘fix’ Tiffany’s situation. There was no formula. There were very few words of wisdom I could offer.

“I only had the love of Christ, which I have seen and experienced in my own life, and which I could draw upon to share with someone who was hurting, alone and scared. Extending love was all Tiffany needed at that moment.”

Tweet This: "I had only the love of Christ. That was all she needed in the moment." #prolife @HeartbeatIntl

As Beliles listened to Tiffany in the initial stages of their conversation, she picked up on Tiffany’s veiled reservations about abortion. She had called to get an abortion, after all, but it was clear she wasn’t on board with it on moral grounds as a professing Christian.

When they looked together at relevant scriptures, Tiffany said that, for the first time, she was struck on a personal level with the biblical theme of God’s concern for the protection of the innocent.

That proved a crucial turning point for Tiffany. But, it felt like the final deathblow to she and Filip’s threadbare marriage when he made it clear that, even though he’d try, he wasn’t convinced they would stay married much longer.

Neither was Tiffany, but as her pregnancy went along, she and Filip’s marriage turned a corner neither of them saw coming.

“I was walking on eggshells every day, waiting for him to say, ‘Okay, time for you to go,” Tiffany said. “I don't even know how, or when, or what exactly happened, but shortly before Jonathen was born, we were probably at the best we've ever been in our marriage. I think the whole situation forced us into friendship and to actually talking to each other rather then just trying to be married.”

Last March, Tiffany and Filip renewed the vows they originally made over a decade ago. It was a day Tiffany said she thought would never come. But that was before Jonathen came and turned their world right-side up.

And, it was before she made contact with Beliles at Heartbeat Crisis Pregnancy Center.

“I found emotional support, I think that was the biggest thing for me since we didn't have a whole lot of family or friendships there,” Tiffany said. “Then, of course, the spiritual support that I didn't have from anybody. If there was ever a need that I had, Carrie made sure it was met in the best way she could do it.

“The emotional and the spiritual support were the biggest things with her.”

Back at the Pantovich home outside of St. Louis, naptime draws to a close as Brinden, the youngest, vies for the prime real estate of his mother’s lap with his older brother—and natural rival—Jonathen.

Brinden has never known a world without Jonathen. And thanks to Beliles and Heartbeat Crisis Pregnancy Center, Tiffany and Filip can’t remember one either.