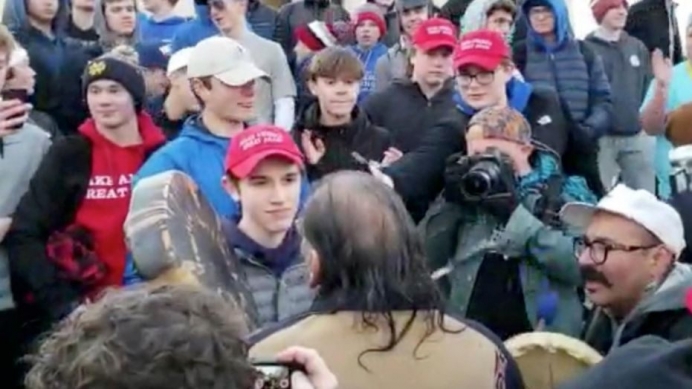 3 Takeaways from the #CovingtonBoys Media Catastrophe

Unfortunately, the most-reported event relating to the March for Life was not Vice President Pence’s appearance at the pre-March rally. Nor was it Ben Shapiro’s speech or any other salient moment. The media didn’t notice the brave moms of Babies Go to Congress. They didn’t pick up on more than 100,000 people marching peacefully and joyfully, though they had to walk through mud and snow to get to the March in the first place.

None of this was important to members of the mainstream media.

Instead, the big news was a seconds-long video clip, loaded on Twitter, which seemed to indicate some teenage boys from Covington Catholic High School (Covington, Kentucky) harassing an old, tired and peaceful Native American, just wanting to reach the Lincoln Memorial hours after the March for Life.

The New York Times, Washington Post, NBC, ABC and others piled on quickly. CNN ran an interview with the Native American, Nathan Phillips, where he vilified the teens, giving the distinct impression that they surrounded him and were threatening to harm him.

Conservative groups joined the outrage. National Review posted an article with the headline, “Covington Boys Might as Well Have Just Spit on the Cross.”

Social media went berserk. The boys, their families and the school itself were threatened. The most violent aggressor may have been Jack Morrissey, co-producer of Disney’s Beauty and the Beast. In a knee-jerk moment he tweeted out, “MAGAkids go screaming, hats first, into the woodchipper.” He added an illustration to make his point. It wasn’t kind.

Quickly the school and the local Diocese issued apologies for the boys’ behavior.

However, more complete video emerged. Then, more. Once the truth came out, it became clear the boys were harassed by an angry bunch known as the Black Hebrew Israelites who called the boys names I won’t repeat in this column. As for Nathan Phillips, despite his assertion that the boys surrounded him, video shows it was he who approached the teenagers.

Today, we finally have more of the truth. The boys were doing cheers, trying to diffuse a tense situation brought on by adults. While we can’t say every single boy in the group behaved perfectly—my goodness, we’re talking teenagers—they made a good account of themselves.

Most media outlets are backtracking as fast as they can, likely fearing lawsuits from these high school boys who were simply waiting for a bus to return home after the March for Life. Tweets were deleted and stories—such as National Review’s noted above, disappeared. Let’s hand it to National Review, though. Editor Rich Lowry admitted this was a major “(mess) up.” (He used a bad word, so “mess” is as close as I’ll go.)

Some of the worst tweeters, such as Morrissey, apologized.

But what are the takeaways we in the pregnancy help community can learn from this? Here are three:

Nathan Phillips—the Native American in the video—was quick to run to CNN and tell his side of the story. He claimed victimhood before more video came out, painting teenagers as violent aggressors.

Today, however, we know Phillips was less than truthful when he said he was a Vietnam-time veteran, a recon ranger. Turns out Mr. Phillips was a refrigerator mechanic in the military, and never went to Vietnam. Let’s not misunderstand the point. Any service is commendable if one serves well. But Mr. Phillips did some serious embellishing to create instant-victim status.

Also, video shows Mr. Phillips approached the young men, not the other way around as he said.

For those of us in the pregnancy help community, what to learn?

It is easy to condemn quickly before all the facts are in. When the facts came out for the #CovingtonBoys, those conservative groups who ran for cover early owed them an apology.

At some point, a sister ministry will come under media condemnation. It may be justified—but it may not. When this happens, let’s not join the fray immediately. It’s okay to say, “I’ve seen the video and initially, there is cause for concern. But let’s wait until all facts are in and both sides have a chance to make their case. I will make a clear statement at that time.”

In the early days of this Republic, newspapers openly chose sides. Citizens knew—and purchased—those papers which touted their views.

Today, we’re living those days again. On cable TV for instance, most conservatives flock to one network while those of a leftward persuasion like a couple of others. This is not a problem—but as pregnancy help ministries we need to be aware. In fact, to get all sides of a story, it doesn’t hurt to watch them all.

In the #CovingtonBoys situation, CNN interviewed Mr. Phillips without even asking the teens for their views of the incident. They had to put out their own press statement, then hope and pray for conservative outlets to rally to their side.

The lesson? Whenever we receive a phone call from a local newspaper, online news outlet or TV station, we can never assume a reporter carries no bias and wants to “tell our story.” We just don’t know. Therefore, we must be wise (asking to tape a conversation is never a bad idea), prepared for any of our words to be taken out of context.

3. Protect Our Staff and Clients

With the #CovingtonBoys, the media and others attacked teenagers. When I saw the viciousness from even Congressional leaders, I was stunned. All I did was close my eyes and thank God no iPhones were around to record my every moment as a teen.

These were kids. They had radical activists from the Black Hebrew Israelites calling them horrible names and screaming at them, then another protestor (Mr. Phillips) walked into the group, banging a drum while those behind him told the boys to go back to Europe.

With all this going on, they were held to an almost impossible standard of behavior.

If some in the media (and others online) attacked these young men without giving them a chance to share their perspective, let’s not think anyone is somehow off-limits. When it comes to the sanctity of life, some will stop at nothing to destroy our work.

The lesson? Our ministries must have protocols for who can speak to the media, and under what circumstances. Anything we say—or don’t say—can and might be used against us. We must be wise, protecting our staff and those we serve, from those with an agenda.

No, not all media is “bad.” Many are just trying to do their jobs, trying to get a story straight. But if the #CovingtonBoys incident taught us anything, it is that what happened to them—at a pro-life march—can happen to us.

Let’s love those who oppose us. Let’s look for ways to dialogue with them in a positive way (that’s what love does).

And as we love, let’s do so with wisdom and discernment. We never want to assume the worst, but we need to be prepared...just in case.