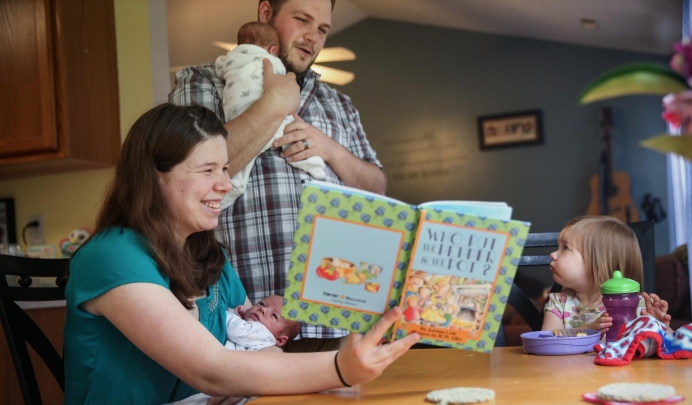 Natahana and Mitchel Clay with their children, including newborn twins they welcomed with the help of a local pregnancy center. Photo By: Timothy Tai, Columbia Tribune

Pregnant for the second time and on the verge of losing her medical coverage, Nathana Clay turned to My Life Clinic, a life-affirming pregnancy center in Columbia, Missouri.

At the clinic, Nathana and her husband, Mitchel, had the chance to meet their twin boys via ultrasound and get connected with Medicaid funding that would help the Clays welcome little Daniel and Joseph into the world in early May.

While that story is unqualified good news in the eyes of virtually every human being on the planet, it’s the very worst nightmare for abortion advocates in Missouri. Rather than rejoicing with the Clays, the abortion lobby laments the state’s largest-ever investment of $6.4 million in pregnancy centers that benefit thousands of women in Nathana’s situation each year.

Oh, have we mentioned that My Life Clinic is right across the street from Planned Parenthood, its bottom line evaporating every time a mother chooses life over abortion?

That would explain the abortion lobby’s fear of successful families, wouldn’t it?

Hard to keep the lights on when clients—and their preborn babies—are leaving in droves for a better option.

Writing for the Columbia Tribune, Brittany Ruess tells both sides of the story in a piece published Sunday. First, Ruess airs the abortion lobby’s grievances against pregnancy centers like My Life Clinic, which NARAL Pro-Choice America’s state and national leaders put forward in a joint letter to Gov. Eric Greitens earlier this month.

While NARAL’s brass alleges that pregnancy centers falsely advertise and trick women into their centers, wherein unsuspecting women are summarily thumped with a hidden religious agenda, Natahana and her family of five tell a much different story.

“Everyone we’ve met has been warm, welcoming and kind,” she told Ruess, whose coverage includes an overview of the help Nathana and her family received at My Life Clinic.

Centers like My Life Clinic meet tangible needs of 2 million Americans every year, including nearly 27,000 Missourians—according to a 2016 report from Alliance for Life of Missouri. Those services fit well within the parameters of Missouri's Temporary Assistance for Needy Families (TANF) program, which accounts for the bulk of the $6.4 million allocated to pregnancy centers under the current budget proposal.

Tweet This: What use does a mother have for @PPAct? And vice versa. #prolife

Over the past year alone, 72 Missouri pregnancy centers in the state served over 17,000 individual women at absolutely no cost with services that included 5,400 ultrasounds. Nationally, it’s estimated that as many 300,000 mothers choose life each year because of U.S. pregnancy centers—90 percent of which do not receive a dime of taxpayer funds.

Considering that Planned Parenthood refuses to even fire up its ultrasound machine to a woman unless she’s purchasing an abortion, it’s no surprise mothers like Natahana are turning to local pregnancy centers instead.

After all, what use does a mother have for Planned Parenthood? And vice versa.