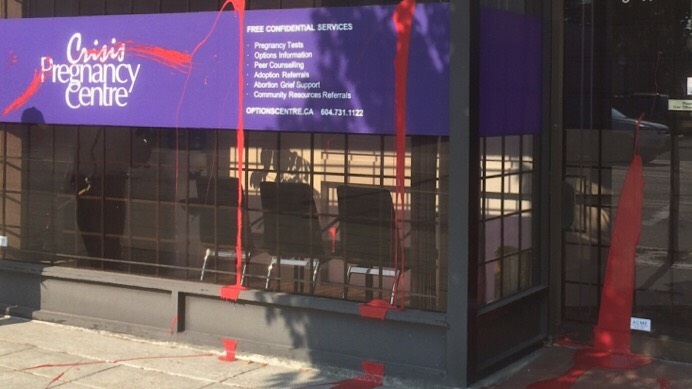 On the mornings of July 30 and and October 1, Crisis Pregnancy Centre staff arrived to work to find red paint splattered across the storefront. Photo Courtesy: Christian Advocacy Society of Greater Vancouver

As the abortion lobby continues to beat its war drum against pro-life pregnancy help centers, one center in Canada has been vandalized, not once but twice, in incidents the Vancouver Police Department is investigating as hate crimes.

Then, on October 1, a similar incident occurred. This time, “Abortion is normal + ok” was written in red paint on a window.

“The red paint looked like blood,” community education coordinator Kelsey Short told The B.C. Catholic, a publication of the Archdiocese of Vancouver.

From the B.C. Catholic:

The potential hate crimes are the most “physically violent” attacks the centre has faced, said Short, but they are not the first. In recent years, the group has faced false allegations online, intimidating phone calls, and hostility from passersby. Earlier this year, some individuals entered the centre and asked staff to get up and leave.

The online harassment is reminiscent of that provoked by former comedienne Lizz Winstead last summer when she and her group, "Lady Parts Justice League," urged fellow abortion advocates to protest pregnancy centers and leave negative Google business reviews against them. 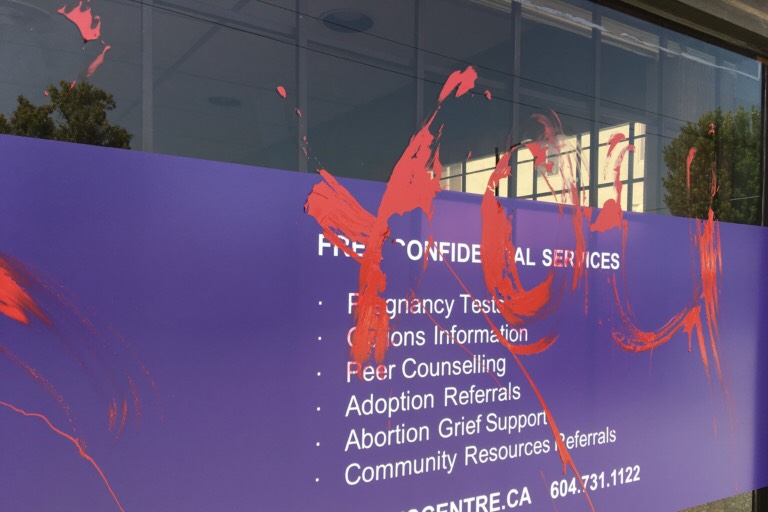 Earlier this year, Google removed hundreds of reviews from Winstead’s campaign, after pro-life groups including Heartbeat International flagged the reviews as false and abusive.

Winstead’s efforts, as well as the recent acts of vandalism, are just a small picture of the abuses abortion advocates have lobbed at pregnancy centers over the years.

For decades, the abortion lobby has fanned a flame of animosity against pregnancy help centers, wrongly branding them as “fake clinics” and harassing them with nonsensical and unjust legislation from the U.S. to France.

In Canada, pregnancy centers have had to combat similar attacks, including a 65-page report of pernicious lies, entitled Exposing Crisis Pregnancy Centres in British Columbia, authored by Joyce Arthur, the executive director of the Abortion Rights Coalition of Canada (ARCC).

Despite the antagonism, CPC’s neighbors have been immensely supportive following this year’s attacks. A local graffiti removal company even offered to clean up the paint for free—a job that would have cost the center thousands of dollars.

Operating for 29 years, CPC is one of two pregnancy centers run by the Christian Advocacy Society of Greater Vancouver. Together, the centers have helped 19,000 women experiencing unplanned pregnancies, post-abortion grief, domestic violence, and sexual assault.