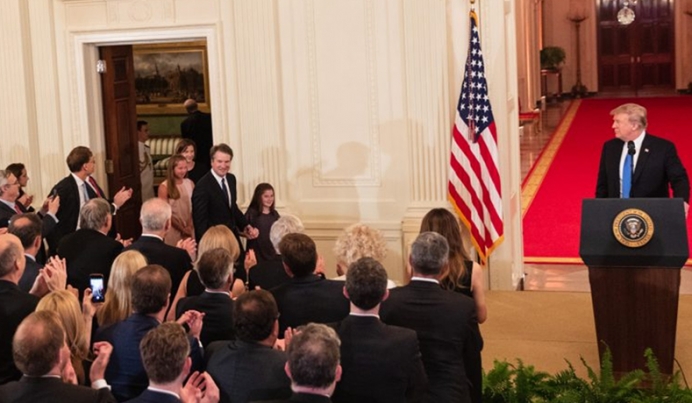 The pick is in, the pundits have a few days of fodder for their newscasts and we can wait with anticipation for the back-and-forth at Judge Brett Kavanaugh’s confirmation hearing. But what does all of this mean to the Pregnancy Help Community? Five thoughts:

Every election cycle, we hear someone in our circle of friends say, “They’re all the same. It doesn’t matter who you vote for—nothing changes in Washington.” This kind of thinking is, to say it gently, “Buffalo Chips.”

If Hillary Clinton was in office today, we would be on the verge of a 6-3 liberal majority, where NARAL-inspired laws (NIFLA v. Becerra would have been a 4-5 loss) would run rampant for the next 30 years. Not only this, consider President Obama’s influence on lower courts, where he appointed more than 300 judges. So far, Trump has placed 43 judges on benches across the country—which is ahead of where Obama was at this point in his presidency.

So yes, the presidency matters.

NARAL, in its infinite wisdom and with judicious restraint, tweeted this about Kavanaugh just one day after his appointment:

“We’ll be DAMNED if we’re going to let five MEN—including some frat boy named Brett—strip us of our hard-won bodily autonomy and reproductive rights. #StopKavanaugh #SaveRoe”

According to the abortion lobby, this is what passes for intellectual discourse and honest disagreement on the vital issues of our day. Good luck with that.

Tweet This: One takeaway from #SCOTUSPick: The political left sure does provide comic relief. @KirkWalden #prolife #SCOTUS

The unwritten rule of confirmation hearings is that a nominee is not to be asked—nor should tell--how he or she would rule on a specific case.

In her 1993 confirmation hearings, Justice Ruth Bader Ginsburg went beyond even this understanding of protocol, refusing to answer at least 30 questions, citing Canon 5 of the American Bar Association’s Model Code of Judicial Conduct. Answering a question regarding sexual orientation, Ginsburg said, “I cannot say one word on that subject that would not violate what I said had to be my rule about no hints, no forecasts, no previews.”

Ginsburg was confirmed, 96-3. More on this in a second.

Today apparently, the game has changed. Sen. Chuck Schumer (D-NY) now believes nominees must answer specific questions on cases they may see while on the Court. Convenient, yes?

4. “Advise and Consent” Carries a Different Definition for Democrats, Republicans

Democrats made the strategic decision to tear into Republican Supreme Court nominees in 1987 by actively opposing Robert Bork, a Reagan appointee. Six liberal Republicans joined Democrats in voting against Bork, who lost his confirmation vote, 42-58. Once Democrats got their scalp, moderate conservative Anthony Kennedy got the nod, earning a 97-0 vote.

Since Kennedy’s nomination, Republicans and Democrats have had different views on the definition of “Advise and Consent.” Democrat-appointed nominees have had far less opposition from Republicans, as the conventional Republican wisdom has been, “To the winner goes the spoils.” In other words, a Democrat president gets to choose his nominee without automatic backlash.

It’s seen in the votes: Democrat-appointed justices Ginsburg (96-3) and Breyer (87-9) coasted through their confirmations.

But something else happened. Democrats decided every Republican nominee is a war. The results? Thomas, 52-48. Alito, just 58-42. They let Roberts through, 78-22, but fought against Gorsuch (54-45) and pledge to do the same against Kavanaugh.

Since then, Republicans have gotten somewhat tougher, but not much. Kagan (63-37) and Sotomayor (68-31) were never in danger of losing confirmation.

We’ve come a long way from the original intent of the Senate’s constitutional role, where the upper body was seen only as a check on a hypothetical out-of-control president appointing cronies or using the Court to pay back political favors.

Now, Democrats are making every appointment a political battleground. It’s not what the Framers intended, but it makes every U.S. Senate race more important.

How would a Justice Kavanaugh rule on Roe? It’s likely no one can say for sure. The abortion lobby is apoplectic, but they were frightened of Justice David Souter, too—who protected Roe.

But let’s never forget, if Roe were overturned tomorrow it would only send the abortion issue back to the states. New York and California—along with many other blue states—would be abortion havens. And let’s be honest about the current political landscape: Many red states would—most likely—find convenient ways of avoiding the subject.

The Supreme Court is important, certainly. Over the last few generations, it has become too important, going beyond its original purpose to legislating on issues having nothing to do with the Constitution.

Still, Roe or no Roe, it is up to the pro-life community to frame this nation’s culture as one which celebrates, respects and honors human life. As Heartbeat International President Jor-El Godsey points out, regardless of any Court decision, we must hold fast to this mission.

Judge Brett Kavanaugh—it appears today—will be confirmed to the U.S. Supreme Court. The vote—depending on how much some red state Democrat Senators fret over their re-election campaigns—will be about 52-47 (assuming Sen. John McCain of Arizona can’t make it to D.C. to vote).

If Kavanaugh is the constitutional originalist many believe he is, the Court will pull back from legislating on every issue; sending more questions back to the voters to decide. Roe may be one of them.

All of us then will watch to see what happens. In the meantime, however, we have a job to do. Let’s roll up our sleeves and get back to work.