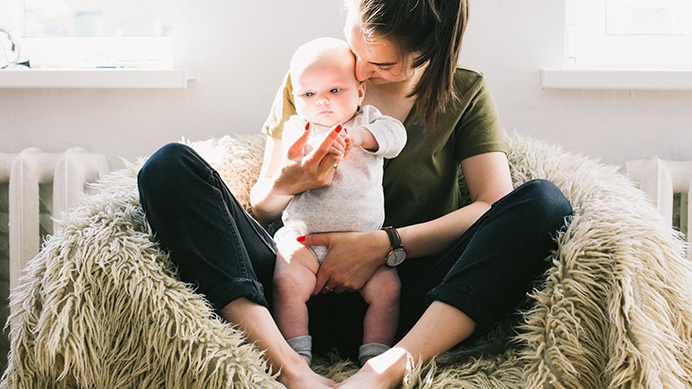 Sing It Loud: Why Sharing Your Unplanned Pregnancy Story Matters

It's only by God's grace and with His given strength that I was ever able to talk publicly about my pregnancy. Those closest to me can attest to what used to be my extreme fear of being in front of a crowd. It started when I was young and continued all the way into my adulthood. I have never wanted to be center stage.

The first time I spoke publicly about my pregnancy was at a fundraiser banquet to a room with over 500 people just a few months after my daughter was born. Nervous is an understatement. From the little bit I can remember, I know I was having to breathe through each step I took to get up to the podium. To this day, I don't remember when or why I agreed to do it, but I am so grateful that I did. Being able to share my story that day started a blessed journey and was more freeing than I could have imagined. In that moment, what had so far been my life's biggest trial was being used to encourage others and bless me in the process.

From there, I had the opportunity to speak at multiple venues over the course of several years, and little by little, I could see God using my unplanned treasure of a daughter to give hope to girls and women who needed it. It brings me such joy to see how my daughter's life is already making an impact on the world without her even knowing it. I don't want to wish the time away, but I do look forward to the day that I can share with her the many ways her life has been a blessing, not just to me and her father, but to so many others.

Through the years, I have also realized that there are a surprising number of women who have the same story, but understandably, decide not to share it. The fear of the criticism and judgment is immense, and if I'm honest, the thought of it still intimidates me each time I speak publicly. But I am always so pleasantly surprised by the multitude of women (and men) who approach me afterward to say something along the lines of, "That could have been me", or "The same thing happened to my...(insert family member/friend)", or "My daughter is going through this", etc.

Tweet This: Helped by a pregnancy center as a pre-med student, Lauren says sharing her pregnancy story has set her free. #prolife

The fact of the matter is, my story is not uncommon. It is not rare. By all statistics I can find, I am actually one of a very large number of women who face an unplanned pregnancy. One of my first thoughts when discovering I was pregnant was, "This doesn't happen to girls like me." I grew up in a Christian home, with parents who held me to a high standard and loved me unconditionally.

How very wrong I was. This happens to "girls like me" every single day. Unfortunately, very often it is girls and women like me that, when faced with that same fear, ultimately believe the lie that ending a child's life will make their life easier.

I am convinced that a better understanding of how common unplanned pregnancies are would alone reduce the rate of abortion. The fear, shame, and guilt that these girls and women face is enough to make even the most faithful Christian question their views on the pro-life debate. But it shouldn't be. There are far too many women who have lived through it before them.

I am but one very small fish in an ocean of women who have had the privilege of watching their life's greatest trial turn into their greatest blessing. No, it was not ideal to have a child before marriage. No, I am not endorsing pre-marital sex. What I am suggesting is a change of heart and a willingness to share. If even a fraction of the women who have been through this would talk more openly about it, maybe there would be a greater acceptance that even though this is unintended and not ideal, it is happening and it needs more awareness and support.

So, maybe then when a positive pregnancy test is staring you, your daughter, your cousin, or your friend in the face, there would be less fear. Instead of shame and guilt, maybe the first thing to come to their mind would be my daughter or the many other unexpected but enormous blessings they have heard about. Maybe they would remember the many women they have seen or heard about and think "No, this isn't what I had planned, but I have seen what an indescribable joy it can bring."

This is my story, this is my song. I pray the many women who have the same song would sing it loud and proud, not only because their child's life is worth celebrating, but because there are many other lives who may be depending on it.

Have an idea for a story at Pregnancy Help News? We'd love to hear it! Share it here.

Lauren Urrea is a Physician Assistant at a family practice in small town Elkin, North Carolina. However, she spent most of her life growing up in Virginia and considers herself a forever Hokie after earning her Bachelor's at Virginia Tech.

She is passionate about the pro-life movement, so she also spends many of her lunch breaks performing routine OB ultrasounds at Lifeline Pregnancy Help Center. She has documented her own journey through an unplanned pregnancy on her blog: lknuppel.blogspot.com.

She currently lives in Winston-Salem, North Carolina with her husband and 3 precious children, who are her daily reminders of God's faithfulness and grace.