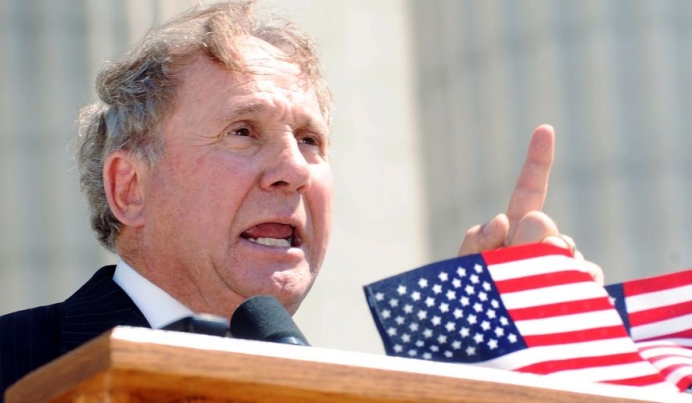 Could the Supreme Court end up permanently overriding the First Amendment of the Constitution in favor of the abortion industry? That’s what Newmax TV analyst Michael Reagan suggests is a likely outcome of the fight in California over the state’s Reproductive FACT Act.

Upheld by a three-judge panel of the 9th U.S. Circuit Court of Appeals in mid-October, the law threatens to fine 75 pro-life state-licensed medical clinics who offer free ultrasound and other no-cost medical services if they refuse to post or distribute a government-specified message the organizations say violates their constitutionally enshrined rights to free speech and religious convictions.

“In effect this means if a conflicted and troubled pregnant woman comes to the center for Christian counseling, in addition to advice on raising the child herself or putting it up for adoption center employees are ordered by the state to also suggest the woman visit an abortionist,” Reagan argued.

While Alliance Defending Freedom (ADF), National Institute of Family and Life Advocates (NIFLA) and the American Center for Law and Justice (ACLJ) filed petitions for a rehearing from the court late last week—in addition to a motion for a preliminary injunction in Illinois, where a newly adopted law requires pro-life medicos of all stripes to refer for abortions—Reagan cautioned against an overly optimistic view of a fight that may take pregnancy help organizations all the way to the Supreme Court.

“As tempting as it is for the plaintiffs to appeal that literally ungodly ruling to the Supreme Court, that is a dangerous course,” Reagan said. “Currently there are only two possible outcomes with this Supreme Court. The current composition of the court—four liberal hacks vs. two conservatives and two weather vanes—means that a tie, which doesn’t establish a precedent, still allows the California ruling to remain in effect, is the best possible outcome, but that is no victory at all.”

Reagan, whose father appointed Justice Anthony Kennedy—the swing vote in the 2015 Obergerfell v. Hodges case legalizing same-sex marriage and the 2016 Whole Woman’s Health v. Hellerstedt case striking down commonsense abortion regulations in Texas—pointed out in his column that it would be a violation of free speech even if the shoe were on the other foot and it was Planned Parenthood who was forced to promote life-affirming pregnancy centers.

A recent summary judgment throwing out a 2009 Baltimore city ordinance that bears similarities to the California requirement on non-medical centers fell into line with previous attempts to force pregnancy centers to post signage specifying which services they do not offer in Austin (TX), Montgomery County (MD), Washington state, Oregon and New York City, but the law in California has been unsuccessfully challenged five times in the courts since last December.

Even with past precedent on the side of pregnancy centers, the abortion industry’s sway over governmental agencies, including the present composition of the Supreme Court, leads Reagan to project the continued trampling of pro-life free speech and exercise of religion.

“The worst, and most likely [outcome], is that one of the weather vanes will join the four leftists and establish a nationwide precedent that makes Christian freedom of speech contingent on the wishes of Planned Parenthood and abortion cheerleaders in state legislatures.”