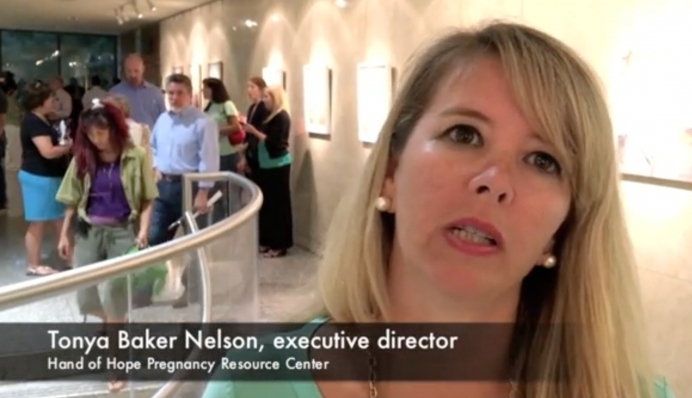 At the end of 2015, Tonya Baker Nelson’s pregnancy help organization, Hand of Hope, bought a house right next door to an abortion clinic in Raleigh, N.C., hoping to give every woman resorting to abortion just one more chance to choose life for her child.

Pending the city’s granting of an occupancy permit, Hand of Hope is going to realize that goal—at least partially—with an open house Sept. 11 and concurrent social media campaign, #StandForHope.

Though the original and ultimate plan is to bring the center’s free ultrasound, pregnancy tests and STD/STI testing services to the new location—which is just 500 yards away from Hand of Hope’s current site—Baker Nelson’s team will finally get to use their “new” space for life skills classes and other non-medical services.

Hand of Hope is currently suing the city to allow them to use their building for the entire gamut of its services, but with no court date on the horizon, Baker Nelson and her board of directors decided now is the time to get moving.

“We’re just trusting that God knows exactly what He’s doing,” Baker Nelson said. “Every day, we’re just getting up and saying, ‘Okay God, what do you want us to do today? How do you want us to fight this battle today?’ I’m a little impatient, but I think He knows that.”

When Hand of Hope—which brands its two pregnancy centers, “Your Choice Pregnancy Clinic”—purchased the house in December of 2015, the goal was to move its Raleigh center to the location, which is right next door to “A Preferred Women’s Health Center.”

Though the city had already announced zoning plans that would have allowed Hand of Hope to begin performing ultrasounds and STD/STI testing in the new facility, the abortion business’ owner-administrator, Calla Hales, pushed city leaders to keep the pregnancy center from offering women a look at their preborn babies next to her clinic.

Tweet This: North Carolina #prolife ctr to move next to #abortion mill this fall. #StandForHope #MondayMotivation

Along the way, an unelected board voted, 3-2, to reverse a unanimous City Council decision that would have allowed Hand of Hope to start using its own building for life-saving care. Hand of Hope filed suit against the city in August of 2016 and has left the building vacant since the purchase as the legal process has played out.

Though they’ll need to wait until a final ruling to move their medical services into the new digs, Baker Nelson is hoping the incremental move will help her center reach more women who feel abortion is their only option.

“The city of Raleigh won’t let us use our brand new, beautiful ultrasound machine to let women see their babies,” Baker Nelson said. “We’re hoping that maybe by being beside the abortion clinic, we’ll get an uptick in our numbers, which obviously we want to do.”

Baker Nelson, who chose life during an unexpected pregnancy while she was a teenager, said the opposition from Hales and other abortion supporters’ to the ultrasound service in particular speaks volumes about what’s really at stake.

Simply put, Hand of Hope is committed to offering women information and options to make the most informed choice possible. A Preferred Women’s Health Center’s only commitment is to ending lives in the womb.

“It’s the ultrasound piece that they’re really terrified of. It’s just sad. They’re just so blinded and so willfully rebellious,” Baker Nelson said. “It’s sad to me that they’re clearly afraid of something, and it’s the ultrasound part. But we will never back down on that. Never. [Every woman] is entitled to have every resource available to her, and we have it.”