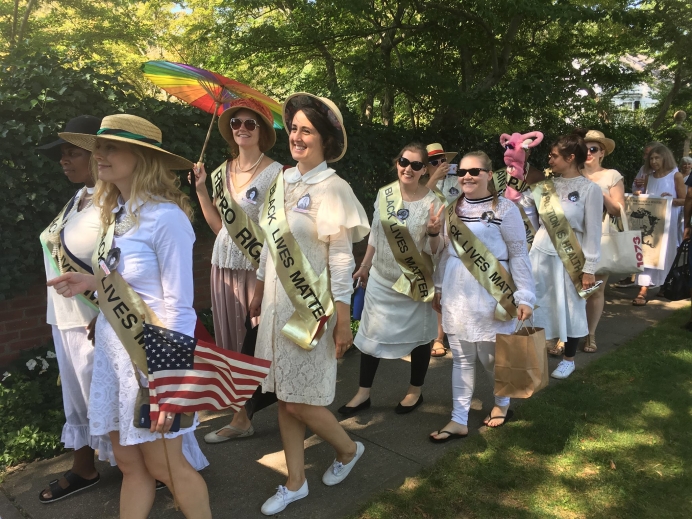 Lady Parts Justice League co-opting the suffragettes - made up entirely of pro-life women - to protest a Long Island pregnancy center on August 24.

In her latest desperate cry for attention, abortion enthusiast and former comedienne Lizz Winstead carried out a textbook definition of what the Left commonly decries as a grave sin: “cultural appropriation.”

Winstead, co-creator of Comedy Central’s The Daily Show and now chief of abortion advocacy group, “Lady Parts Justice League,” has been on a mission to slander life-saving pregnancy centers this summer—a mission, we might add, that has failed spectacularly on repeated occasions.

The latest stop on Winstead’s defamation tour was the Life Center of Long Island, a pregnancy help organization with four locations known as “AAA Pregnancy Options” that have served the community for over 30 years.

Demonstrating outside of The Life Center’s administrative offices Aug. 24, Winstead and about a dozen abortion absolutists marched around with signs reading, “God Hates Fake Clinics,” “Keep Off My Ovaries” and “Abortion is Health Care.”

But it was how Lady Parts Justice League demonstrators were dressed that should have the attention of even the most casual student of history. While they marched against the pro-life center and in favor of abortion as a positive good, the women were dressed as late-19th century suffragettes—a group unanimously and adamantly opposed to abortion.

As Marjorie Dannenfelser, president of the pro-life Susan B. Anthony List wrote in a 2015 piece published by TIME magazine, the early feminists were vocal in their opposition to abortion, which they considered the ultimate exploitation of women.

The public statements of many early champions of women's rights in the U.S. make clear their opposition. Elizabeth Cady Stanton referred to abortion as "infanticide" and wrote that "when we consider that women are treated as property, it is degrading to women that we should treat our children as property to be disposed of as we see fit." Victoria Woodhull, the first female candidate for president, wrote: "Every woman knows that if she were free, she would never bear an unwished-for child, nor think of murdering one before its birth." And Elizabeth Blackwell, the first woman to receive a medical degree in the U.S., wrote: "The gross perversion and destruction of motherhood by the abortionist filled me with indignation, and awakened active antagonism."

… Susan B. Anthony, was a friend and heroine to many of these women. Along with Cady Stanton, she founded The Revolution newspaper, which served as a mouthpiece for the American women’s suffrage movement. Anthony funded the paper herself, refusing the capital that would have resulted from allowing advertisements for "restellism," as abortion was then called. The Revolution published a piece, attributable to Anthony, that said abortion was a choice that would burden both a woman’s “conscience in life and soul in death” and also ultimately an exploitation of women.

Perhaps that’s a message Winstead and her group would have done well to contend with before they marched against a pregnancy center that uses free ultrasounds, pregnancy tests, peer counseling and material aid to empower over 100 Long Island women to choose life each year.

The Life Center also helps women and men who are dealing with the emotional and spiritual fallout of abortions the so-called feminists at Lady Parts Justice League continue to push.

With three of its four locations across from or next to Planned Parenthood, the Life Center of Long Island serves 300 women per month and also comes alongside young fathers to help them embrace their role—something the early feminists would have applauded as well.

Gloria Schreiber, the center’s executive director, said even though she and her staff have been following the latest on Lady Parts Justice League’s campaign to “Expose Fake Clinics” over the past month, it still didn’t dawn on them at first that it was the same group.

“When you look at the women and at the pictures, it looks comical, and that’s what our staff’s first impression was,” Schreiber said. “As soon as we could see the signs, we started to alert people in our other centers. I simply said, ‘Keep it where it is, this has been going on all around the country. Remember, Heartbeat has kept us informed.’ So that kind of calmed everything down.”

Though Schreiber was expecting Winstead’s group to show up at more of the Life Center’s locations throughout the day, the first demonstration was the only one she and her staff witnessed.

Meanwhile, on Facebook, Winstead cluelessly cheered on her own effort as, “paying tribute to the amazing women of the suffragist movement”—an effort which, to repeat, roundly denounced abortion as child murder and the very essence of exploiting women. 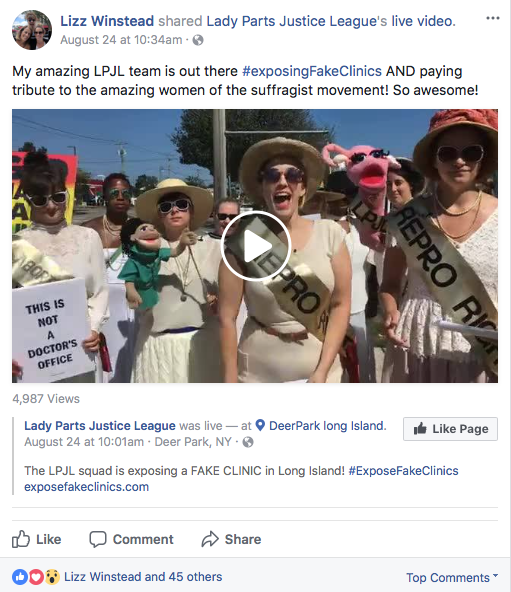 Incredibly, Winstead also took the cultural appropriation a step further, co-opting former slave and abolitionist Sojourner Truth and others for a "Black Suffragists Matter" meme. A mother of 13 who saw many of her children sold away from her, Sojourner Truth, like her white suffragette counterparts, would be no friend to the modern feminist insistence on abortion as either a positive good or a necessary evil.

In fact, not one of the 13 listed black suffragettes ever spoke a word in favor of abortion. On the contrary, it was women like these that white supremacists including Planned Parenthood founder Margaret Sanger sought to eliminate through abortion, calling blacks and poor whites, 'human weeds,’ ‘reckless breeders,’ ’spawning… human beings who never should have been born.” 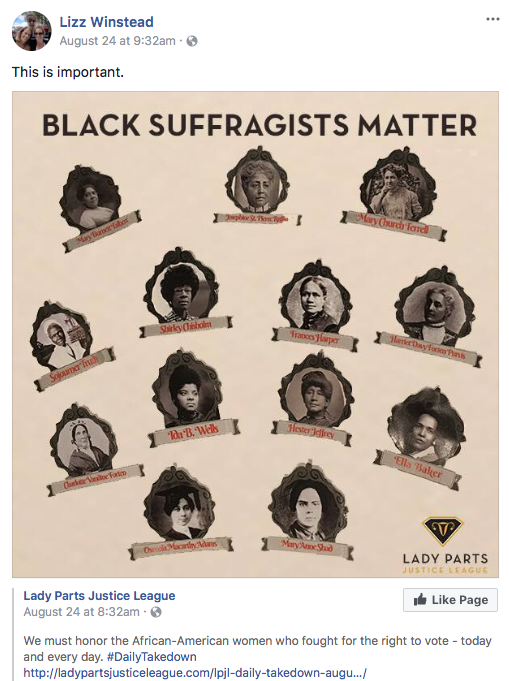