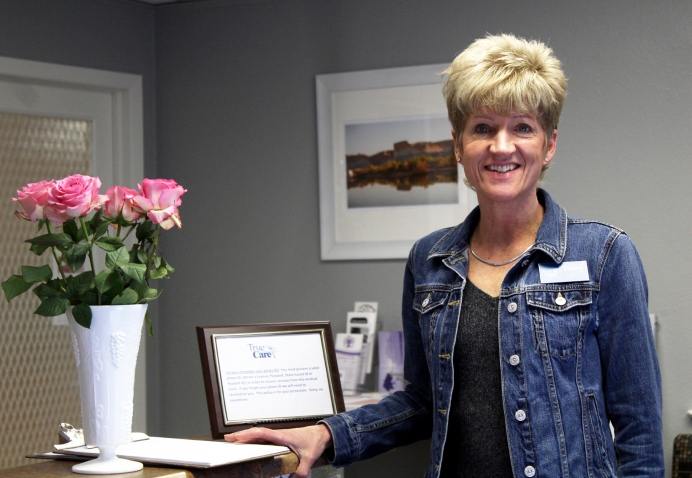 When Teresa “Terry” Winship volunteered at Casper, Wyoming’s pregnancy center during the mid-1990s, she did not foresee helming the ministry within a few short years. A quarter-century later, as president/CEO, she has taken True Care Women’s Resource Center through multiple changes, including locations, names, and programs.

With retirement on the horizon next year, Winship spoke with Pregnancy Help News about those changes, including what lies ahead for her.

From materials to medical services

True Care began as The Caring Center more than 30 years ago; the organization primarily gave out materials, such as formula, diapers, and maternity and baby clothes. Pregnancy testing was self-performed. Winship served as a volunteer advocate and receptionist; then, a few years later, the director’s job opened.

“I didn’t feel I was called to throw my hat in the ring,” Winship said. “I had been a stay-at-home mom all my life. One night, after coming home from a staff meeting, I had seen all these closed doors, and it was almost like God was just opening doors that I saw closed. I thought, “Um, this is interesting.’”

Upon sharing her thoughts with others in the ministry, including the director who was leaving, she found encouragement. So, she prayed about the decision.

“I felt God calling me to at least be open to the possibility and that He would take care of the rest,” Winship said.

Those doors she envisioned opening began to do just that and have continued doing so throughout her tenure. The center went from materials to medical, becoming the first pregnancy center in Wyoming to convert to a medical clinic model.

Winship recalled her first job in leadership was to find a new location for the organization. The Caring Center (which remains the corporate name) rented a building that was being sold. The board didn’t want to buy it, she said, so the search was on for a new home for the ministry. Many people came alongside to help move to a downtown location. Other changes soon followed.

“Our hours were sporadic and inconsistent, and I knew we had to have regular hours,” Winship said. “So, we had a volunteer training. Getting more people involved and having regular hours were priorities.”

The organization affiliated with Heartbeat International and other national groups, including National Institute of Family and Life Advocates (NIFLA). Those associations helped the organization move into other arenas, like implementing a parenting program called Mommy and Me. She credits Heartbeat with the idea.

“My gift is not invention. My gifts include taking something that’s an already established program and implementing it,” Winship said.

Another priority was increasing awareness in the community. Winship networked with other organizations, agencies, businesses, and pastors. Those endeavors proved fruitful. One day, after a pastor’s luncheon, one of the ministers asked for a bit more of her time.

“So, we sat down and talked. He let me know that he personally felt that the life issue was so important, and it was something he felt very strongly about in terms of getting people in the church behind it,” she said.

The pastor’s visit and commitment impacted her.

“That was so encouraging to have a pastor who had been around for a while in Casper and (shepherded) the largest church in Casper,” she said. “As a new director, to come alongside me and say, ‘We believe in what you are doing, and we believe in how God is training you up to be a leader …’ That was neat.”

Implementing the annual Baby Bottle Boomerang also made a strong impact by generating greater awareness and enthusiasm for the ministry, Winship added.

“That was huge! Talk about getting the word out! And people loved it!” she said.

For nearly six years The Caring Center stayed downtown. Growing pains, the opportunity to save money, and the vision for offering medical services, however, caused Winship and the board to again look for a different location. The second building she and the board chair saw became that place; the organization resides there today.

More doors opened. A local bank provided the mortgage with the organization’s down payment, something that rare, Winship said.

“I didn’t know banks don’t usually loan to non-profits. Sometimes it’s good to be dumb and naïve,” she said with slight laugh.

An established family foundation supplied money for operations during the first year, including nurses’ salaries and training. The Caring Center affiliated with Care Net and became Care Net Pregnancy Center and re-opened as a medical clinic.

Additional changes came. Known as True Care Women’s Resource Center since 2011 after input from a focus group of women, the organization also renamed the Mommy & Me program as Baby & Me in order for fathers-to-be to feel more comfortable. Growth of male participation led to launching Fathering in 15. The program has grown significantly, especially after going online due to COVID, and participation remains high. Additionally, three Casper churches support True Care patients through Embrace Grace, and a staff member serves as Resource Coordinator, helping patients with Medicaid, housing, employment, addiction programs, stop smoking programs, and much more.

Future growth includes association with a midwife and a family nurse practitioner, who will share space next door to True Care starting January 2022. The upcoming President/CEO, who comes aboard at the same time, will inherit the endeavor. Winship, who plans to work alongside the new leader until June, looks forward to the start of that venture.

“The focus on the mission and the trajectory we’re on for that seems, to me anyway, one way of providing even more comprehensive medical care for our patients,” she said. “I just see God’s hand in that.”

Winship said one significant aspect of her tenure has been the implementation of the Optimization Tool, created by CompassCare in Rochester, New York.

“Having this very intentional linear process and a way of marketing to that abortion-minded woman has been amazing,” she said.

“We were doing a lot of good work, but were not accomplishing our mission,” she said. “If our mission is to erase the perceived need for abortion and we’re mostly seeing carry to term patients, we’re not doing it.”

She learned about the Optimization Tool in 2008.

“It just resonated with me,” Winship said. “As the leader of the organization, I now had a way I could communicate with donors and say, ‘Look, we are no longer going to be this nice little ministry down the street. We are on the front lines. We are going after these women intentionally – we know how to do it now.’”

Five years ago, True Care saw about 38 percent of its patients fall into the abortion-minded/determined category; in 2020 that percentage increased to 50 percent, and so far in 2021, the number is closer to 54 percent.

Even though many abortion-determined patients still choose abortion, some do change their minds, including a recent patient who learned about the national group Let Them Live by coming to True Care. Finances were her primary concern. Between True Care’s Resource Program and Let Them Live, her financial fears disappeared, saving the life of her unborn.

Winship has been part of several stories of lives saved, including some who either came to eternal life in Christ, re-committed their lives to the Lord, and/or saved the lives of babies. She served as advocate for one couple during the ministry’s downtown tenure who went from abortion-minded to pro-life advocacy.

“Planned Parenthood was around back then. By the grace of God, they ended up at our doorstep,” Winship recalled. “Although we weren’t a medical clinic, and we couldn’t show them their unborn … he really listened to everything I had to say. I could tell he really loved her.”

She shared how abortion can harm relationships, offering a video that highlighted women and couples talking about their decision to abort. The young couple agreed to watch it.

“It really made a difference for them,” Winship said. “Now, to see that young lady grown up, that baby that could have been aborted, and the parents so willing to be such good ambassadors for True Care – that doesn’t happen very often.”

She was able to introduce this family during a fundraiser a few years ago. She also has introduced a woman who chose adoption over abortion, and last year, she presented to the fundraising audience a mother and her daughter, who could have been lost to abortion. Additionally, Winship traveled with a True Care patient to Washington, DC in 2017 for Heartbeat’s Babies God to Congress event.

Those abortion-to-life stories bring her joy.

Tweet This: Being a part of the abortion-to-life stories has brought joy to True Care's President/CEO Terry Winship, who will retire after some 25 years

“It’s like, wow – this is amazing!” Winship said. “To be able to see that this is something you’re a part of – the mother chose life, and this person is here, growing up …The way God has worked – it’s truly been an amazing ride.”