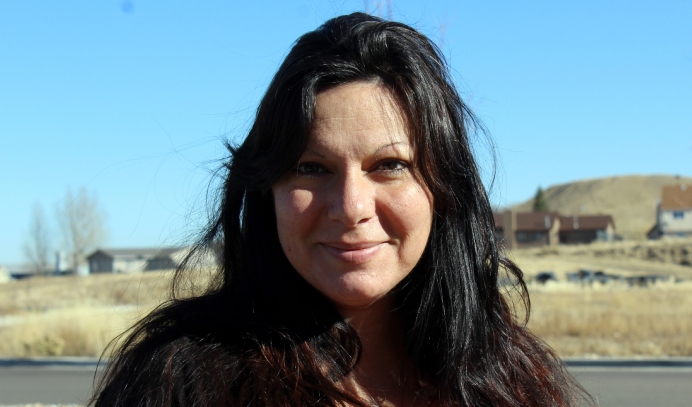 Pressured to abort her third baby, Michelle made a selfless decision to make an adoption plan. Photo By: Gayle Irwin

Pressured to Abort, Michelle Made a Rare Decision

Faced with an unexpected pregnancy, Michelle chose a path precious few women take. Hoping to help her son thrive in a loving family, Michelle made the choice to create an adoption plan.

“I wanted my child to have a mom and a dad,” she said.

Michelle walked through the doors of True Care Women’s Resource Center this February. New to the community of Casper, Wyo., she searched online for an ob-gyn, but couldn’t find a provider due to her financial situation.

True Care, however, was listed as the third result under “ob-gyn.” The pregnancy help medical clinic provided what she needed when she needed it: verification of her pregnancy through ultrasound, options consultation, and community resources.

“True Care saved me time—everything I needed was right there,” Michelle said. “They determined the due date with ultrasound, helped me make my decision, and gave me support and resources. Being new to town, all of that was so important, so helpful. I didn’t have to run around town to try to find places and agencies I needed.

“All my questions were answered, and everyone was very nurturing, compassionate, and nonjudgmental. They prayed with me because I was a total basket case. I shed a lot of tears shed that day, both happy and sad.”

Though the father of her baby was pressuring her to abort, and Michelle was considering abortion as her only way out, the visit to True Care, and the relationship that followed, helped her see she wasn’t alone, and abortion was by no means her only choice.

“I was informed on my options and I was also educated on abortion,” Michelle said. “Abortion clinics will not educate any woman on the side-effects; it’s a lot more than a termination of pregnancy.”

Michelle was about seven weeks along when she came to True Care. The father left her when she refused to abort, and she had no local emotional or financial support. Through True Care’s Early KinCare Resource Program, Michelle signed up for Medicaid and sorted through her emotions, processing her situation and options.

“I knew I could live with adoption, not abortion—I knew I’d regret it,” said Michelle, also the mother of a 2-year-old and a 14-year-old. “When I knew there were other couples who wanted to adopt, I decided that was a big blessing I could give somebody.”

The staff at True Care became Michelle’s steady anchor during the waves of uncertainty.

“I don’t care how strong a woman thinks she is, this (decision) is hard,” she said. “I appreciate the follow-up True Care does. They are still my support. They have helped me in so many ways, even if it’s just someone to talk to.”

During the summer, she met with a representative from a licensed adoption agency, ultimately choosing a couple who lives in another state.

“They had tried for years to have a baby,” she said. “I knew I could give them a gift.”

According to ChildWelfare.gov, the adoption rate among American adults has steadily decreased during the past several years, from more than 140,000 children in 2001 to less than 120,000 in 2012. The organization’s report also indicates that the number of intercountry and public agency adoptions decreased as well.

According to AdoptiveFamilies.com, less than two percent of single mothers place their children for adoption, partly due to the stigma of single parenthood dramatically decreasing over the decades, but also owing to the prevalence of the abortion industry.

Financial struggles, which contribute to three out of four abortions, were a significant reason Michelle chose adoption, entrusting her child into the arms of an adoptive family better suited to welcome a baby.

The baby boy was born earlier this fall. Michelle admits the emotions have been challenging.

“I have no regrets, but I do miss him,” she said. “Prayer and faith give me strength.”

Since the birth and adoption of her son, Michelle has been finding ways to re-engage with her family and community. She attends counseling and she is searching for a job, as well as a church. She spends quality time with her two children, and since she chose an open adoption, she receives photos from the adoptive parents of her youngest son and will stay in contact with him and his family as he grows.

As one of just 20,000 U.S.-born babies placed for adoption each year, Michelle, and the staff at True Care, hope her story can help other moms make the life-affirming choice of adoption in an unexpected pregnancy.

“You’re not always prepared for the emotions,” Michelle said. “Be prepared to not be prepared, and that’s okay. It’s a process.”