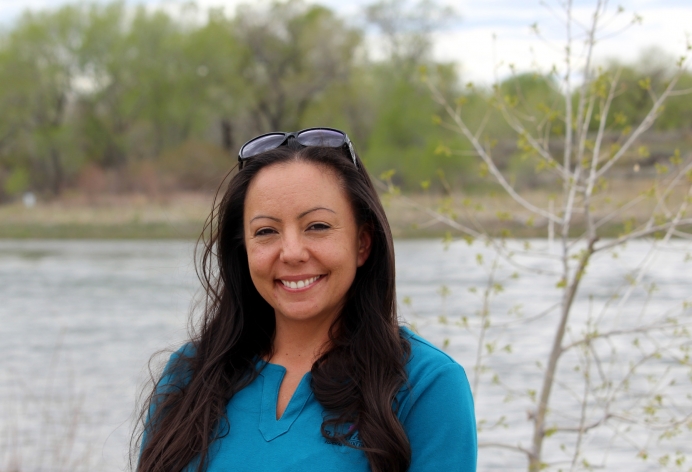 Kayla near the North Platte River in Casper, WY Photo by Gayle Irwin

The 26-year-old woman came into True Care Women’s Resource Center seeking confirmation of her pregnancy. Little did she know that one visit would drastically change her life and the lives of many around her – including her then-unborn child.

Kayla Wolosin learned about True Care in Casper, Wyoming, from her best friend during a visit to the community to see family and friends. She had taken a home pregnancy test prior to leaving on her vacation, and though the test showed positive, “I had hoped it was broken,” she said. Her friend told her to learn for sure by visiting True Care.

“She brought me there,” Kayla said.  “I was really nervous, and when they confirmed the pregnancy, I was really overwhelmed. I thought ‘I’ve already had two abortions and it looks like I’m going to have to do this again’ and thinking ‘When will I learn?’ I was really down on myself.”

The advocate she met with provided resources for her in the town she lived in as well as various materials for her to read. Those items included the book Her Choice to Heal.

Because she was far enough along, Kayla also received an ultrasound picture of her unborn baby

“I had never seen anything like that before in my life … I thought, ‘That’s so cool!’ I was really torn.”

She left True Care, and Casper, undecided about the outcome of her pregnancy.

“I was in a really bad place … with the father. It was an off-again, on-again relationship,” Kayla said. “I let him know (the results of the pregnancy test and ultrasound). He was freaking out, and I was freaking out. He said, ‘You know what we’ve got to do,’ and I said, ‘I know.’”

However, she wasn’t sure she wanted to travel the abortion road a third time. She stopped for the night and secured a hotel room in New Mexico, not knowing God was waiting.

“I got bored, there was nothing on TV, and then I remembered I had that book, and I started reading it,” Kayla said. “The book referenced some Bible verses and there happened to be a Bible in the room. So, I started reading along with the verses it was referencing, and it just – I don’t even know how to explain it – I just knew I was being spoken to by God.”

I remember falling (to the floor) and begging for forgiveness,” she said. “I remember absolutely being in tears, crying out. I just felt this overwhelming spirit and this lift, and I knew it was okay, that I had been forgiven. And I knew what I had to do.”

The next morning, after throwing out her last cigarette, she completed her journey home. Kayla lived with the father of her child, and when she returned, she told him she had made the decision to continue the pregnancy.

“He wasn’t very happy about it,” Kayla said. “He was pretty upset at first, but after he had time to blow off some steam, he actually started to get a little excited about it. I think we both came to the decision it’s not the worst thing, and we’d figure it out.”

Sadly, her partner had a drug addiction that escalated as Kayla’s pregnancy continued.

The man took his own life when she was more than seven months along. Kayla’s spiritual seeking had also continued, though, through a journal she kept.

Her co-workers and her community rallied around her also.

“I was in a fog and I didn’t know day to day what I was going to do or how I was going to afford to do it,” she said. “Somehow, God continued to provide. It was crazy – I was getting gifts every day at work, some from anonymous people in the community. It was amazing! Every day, I would get something new from people. I kept getting showered with gifts for the baby, things I wouldn’t have even known I needed.”

After the birth of her daughter, Kayla received a phone call from a True Care follow-up specialist.

“I had started seeking (God) more (but) I didn’t even own a Bible,” Kayla said. “She happened to call me on a day I was sitting at home while on maternity leave.”

“I had Googled ‘bibles’ and oh, my goodness – there were thousands!” she said. “I didn’t know where to start, so I thought ‘Never mind – I give up.’”

“When she called and asked how I was doing and how the father was doing, I let her know (what happened),” said Kayla. “She goes, ‘Can I pray for you?’ and she did. And then she asked if there was anything else she could do, and I said, ‘Yeah, absolutely – help me find a Bible!’ A few days later, I get this care package with a Bible in it.”

The follow-up specialist left a note for True Care staff, who put together a box of baby clothes, a blanket, and a Bible and mailed the package to her.

This all happened 10 years ago. Kayla still has that Bible, marked up, with posted notes and tape around some of the binding. She also still has the book that began her spiritual journey, Her Choice to Heal.

Kayla returned to Casper about six months after the birth of her daughter Alyssa, and she has been married to Daniel Wolosin, a former pastor’s son, for more than eight years. In March, she was baptized with her family by her side. Invited guests included True Care staff members. She’s involved in a local church and a Bible study. Her daughter is now nine, and the friend who brought her to True Care is involved in the same Bible study as Kayla.

“When I look back, that book I was given … and the ultrasound picture – that opened my eyes to the fact that’s a life,” Kayla said. “All those things added up together.”

“And then that follow-up call – I remember just having goosebumps of the timing of when that happened,” she said. “I never had anyone ask if they could pray for me. My ears were opened when she prayed, that’s for sure.”

Kayla admitted she did not know about pregnancy centers before she stepped through the doors at True Care nearly a decade ago.

“Pregnancy centers are vital,” said Kayla. “If I hadn’t gone to True Care, I know what I would have done. I would have made the (abortion) appointment. I’m so blessed my best friend knew about True Care.”

Tweet This: “Pregnancy centers are vital. If I hadn’t gone to True Care, I know what I would have done. I would have made the (abortion) appointment.”

To other women who find themselves in the same place she was ten years ago, Kayla said, “I don’t think you’re ever ‘ready’ (to have a baby), but somehow, God makes a way.”

“Really seek out the resources around you,” she said. “That’s something I never tried to do and that’s what got me into the places I was before.”

“Just listening to the one other party - the guy - and being influenced very strongly (by the words) ‘This is what you’ve got to do and there’s no other choice,’” said Kayla. “There is another choice.”

Kayla’s daughter, her entire life, testify to that fact.