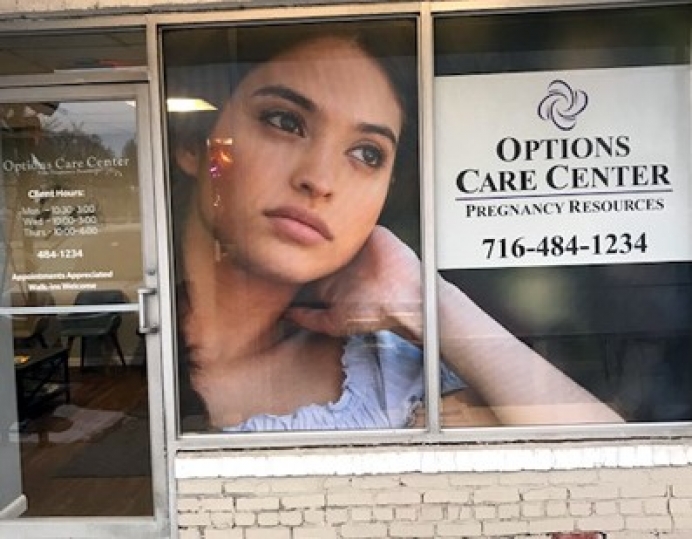 In the 18 months since Jessie Andersen stepped into the executive director position of a western New York pregnancy center, she and her team have experienced God’s provision for the ministry, especially this year.

During the first six months at the helm of Options Care Center in Jamestown Andersen led the organization’s reconstruction project to become a medical clinic.

“We had a huge building renovation. I was a contractor, or basically so,” Andersen said.

Upon receiving a donated ultrasound machine from another pregnancy center and bringing in a trainer to guide the volunteer sonographers, Andersen and her team learned the donated equipment needed to be replaced.

“We were told, ‘you need to get a new ultrasound ASAP,’” she said.

Raising money for the machine became their focus as 2020 unfolded.

“In February and March, everything was going well … and then COVID hit,” she said.

The center was open only one day a week, and the spring fundraiser was cancelled, impacting donor funding. When her one-year evaluation arrived in May 2020, she was told by the board her job might be eliminated due to lack of funds. Andersen acted.

While speaking with the leader of another center one day, Andersen learned about a fundraising endeavor that center had done, a county-wide giving program. She put on her research hat and discovered the county where Options is located offered something similar called, “Give Big, Chautauqua.” She registered her center as a recipient.

“We brought in seven times the amount we usually received during our spring fundraiser,” Andersen said. “That meant we had extra.”

She spoke with the board about designating those additional funds toward the new, needed sonogram machine.

Options also received money from the federal COVID-19 PPE program. The board kept Andersen on.

When September rolled around, another in-person fundraiser, the center’s annual Walk for Life, was cancelled. However, a virtual was held that “brought in more than usual,” Andersen said. Options also received a grant. Those extra funds helped Andersen and her team raise the $15,000 needed to complete the new ultrasound machine purchase, including a 3D transducer.

“It’s been an amazing year,” Andersen said. “In a matter of months, we went from nearly laying me off to raising $15,000 for a new sonogram. God likes to work in those impossible moments.”

Tweet This: “It’s been an amazing year .. God likes to work in those impossible moments.”

Options is back to being open several days a week, and according to Andersen, more abortion-vulnerable and abortion-minded women are walking through the doors.

Three volunteers, one RDMS (Registered Diagnostic Medical Sonographer) and two nurse sonographers, operate the new ultrasound machine. Andersen and one other person are the only paid staff. In addition to medical services, Options provides Real Essentials, a relationship program for area schools, a parenting program, and an abortion healing program.

The pregnancy center’s city of Jamestown is a community of about 30,000 people located about 60 miles south of Buffalo, near Lake Erie. Andersen was hired as Options’ executive director in May 2019.

The passage of New York’s radical abortion expansion law and the release of the movie “Unplanned” compelled Andersen, who is also a book author, to step into pro-life work. The former English teacher and stay-at-home mom relies on God and people in the pro-life, pregnancy help community for assistance in navigating her somewhat new role.

“I feel unqualified (to lead the center), but I’m willing to ask questions,” Andersen said. “I have an amazing board – they are forward-thinkers, and they’ve been a huge help to me.”

She has visions of increasing services in the future, including opening a satellite center and offering STD testing.

“It’s been a rollercoaster ride, that’s for sure,” Andersen said of her tenure thus far. “But I’m where God wants me to be. I’d encourage others if they step into situations that feel uncomfortable, that’s probably God telling you it’s where you’re supposed to be.”