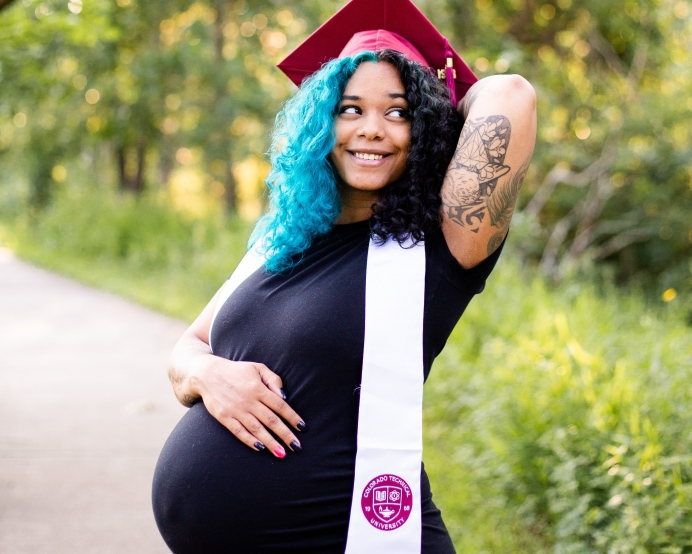 From Isaiah 61:3 comes a beautiful promise of God to bestow a “crown of beauty instead of ashes.” Mariah is a mom who found herself facing an unplanned pregnancy and contemplated abortion. And yet while her life experiences have been filled with metaphorical ashes, the beauty that has been bestowed prevails over the ashes.

Mariah is mother to not one, but four sets of twins, one lost to abortion, and the youngest pair born just recently.

She had experienced the death of her mother at age 12. Add to that abuse suffered at the hands of the caretaker after the loss of her mother, a father who struggled with alcoholism, her being arrested for drug possession, having previous unplanned pregnancies with twins (yes, plural pregnancies with twins), an infant placed in the NICU for six weeks, divorce, being in the sex trade for months to support her children, abortion, and now again, another unplanned pregnancy.

With this fourth pregnancy, Mariah had the baby’s father at her side. Still, with four children already, she did not feel prepared to add to her family.

So, Mariah did an internet search for “abortion services in Rolla, MO,” and the result was the Pregnancy Resource Center (PRC) of Rolla.

“I thought if it is twins again, I am getting an abortion,” Mariah stated. “However, the thought of having another abortion was crippling.”

According to her doctor, Mariah must be releasing two eggs each month, thus the 100% occurrence of twins with her pregnancies.

Would she add more ashes to her story? The weight of supporting five or even six children loomed large.

A message on the PRC website hit home with Mariah’s situation, stating, “Experiencing an unplanned pregnancy? Completely stressed out? We can help! Our staff consists of strong women who have been there before. We will provide you with caring, compassionate counsel because we understand that life doesn’t always turn out the way you thought it would.”

This message was actualized, as Mariah describes of her interactions at PRC.

“There was no judgment,” she said. “I had weekly appointments continuing to talk about what we would do.”

Tweet This: “There was no judgment. I had weekly appointments continuing to talk about what we would do” - Pregnancy help center client

It would be a total of six appointments over three months that led to Mariah choosing life.

“Over those three months we got close with the staff at PRC,” Mariah said. “We thought so long about the decision. They have helped us so much; words cannot even describe it.”

PRC’s staff includes a team of Certified Professional Life Coaches targeting and working with the abortion-minded and abortion-vulnerable clients. Training for these individuals begins through the Professional Christian Coaching Institute and is then completed at the center by PRC’s Executive Director Jane Dalton.

Joseph Dalton, CEO, and co-founder of PRC, believes that life coaches are effective in working with clients because they empower them to find their own voices and own their choices.

He explained the concept in an earlier conversation with Pregnancy Help News.

“Most of these women that we're serving are just blown away by life coaching because when you're being coached, you're in charge,” Dalton said. “You're in charge of the conversation. People are listening to you. A lot of these people have never had people actually listen to them before and care about what they're saying. You know, that's not the world they live in, so it's special to them.”

“Pregnancy isn’t usually the main issue,” said Jane Dalton. “There were many crises before the pregnancy which brought them to this point.”

“Were just here to help,” she added. “You are not trying to convince the client of anything—only to help the process of determining what is best for them. So, you ask lots of questions.”

Jane Dalton believes that because they make everything about the client it causes their clients to feel comfortable returning to the center. The goal is to get the client to the other side of her situation whole and healthy.

“We say, ‘You deserve to take all the time you need to make this decision,’” she said. “When we honor their free will, talking about their options, you have a better chance to guide them toward what they want their life to look like down the road."

When Mariah initially came to PRC, she was six months from graduating college, in the middle of a divorce, with five-year-old twin girls, three-year-old twin boys, and she had aborted a set of twins a few years earlier in 2018.

As discussion continued week to week, even their vehicle situation was a source of pressure.

Realizing they didn’t have a vehicle large enough to fit eight, she asked Paula (her PRC coach), “Do they even make eight passenger cars?”

Paula Marti, along with the Daltons, worked as a team in encouraging Mariah and her boyfriend (the twins she was carrying are his only biological children). The PRC team set up a GoFundMe page to tackle the car situation. It turned out that they wouldn’t need that.

“We were up to about $1,500 when I received a call from a local car dealer informing me that he would be buying a car for them,” Joe Dalton said. “To me this became the most beautiful part of the story.”

“We had never received donations from this dealership, and I had never met this man,” he explained. “He said, ‘Joe I have been in the car business a long time, but I’ve only been a Christian for a few months. If anybody can do this, it’s me. If anyone should do this, it’s me. Please let me find them a car.’”

At the next follow-up visit Mariah was still abortion minded. Her boyfriend was at the appointment, and during the ultrasound she brought up the car issue to Marti, who then informed her they were getting a car for them.

The 2003 Explorer died when they received the replacement vehicle.

“We had to have the old car towed as that was when it completely gave out,” Mariah said.

With the car issue resolved Mariah was choosing life and yet had one last apprehension.

“I was nervous about introducing the babies to my other kids,” she said. “Specifically, I was concerned about Isaiah who needs extra guidance.”

Isaiah has taken to his new baby sisters.

“Now (with the new babies home) he is such a helper,” Mariah said. “The babies are six weeks old, and they fit in so well into our family.”

With the two baby girls added, Mariah reflected on how much the PRC team helped their family.

“Joe and Jane have a big family,” she said. “We can relate to them, what they’ve been through.”

“I had the cell numbers of Paula, Joe and Jane and I felt open to call or text them anytime,” she added.

Mariah is one of 11 kids herself, all adopted, in a military family. She wishes she had her parents still here to ask how they managed a large family.

“I would ask them things like, ‘how often did we fight?’ and ‘when does it stop?’” she said.

Even with all the challenges Mariah is enjoying her children and feels supported by her infant daughters’ dad, who will be staying home with the kids as she returns to work.

With her education completed, Mariah looks toward the future and hopes to increase her pay and get better hours because of her new degrees in human services and criminal justice. She hopes to work with law enforcement in the future to deescalate situations with drug addicts.

Mariah’s life experiences - the former ashes - now provide her an amazing understanding of those who struggle with addictions and mental illnesses. She is excited to put this into practice with her work as she enjoys life with her family.

Editor's note: This article has been updated with additional information.