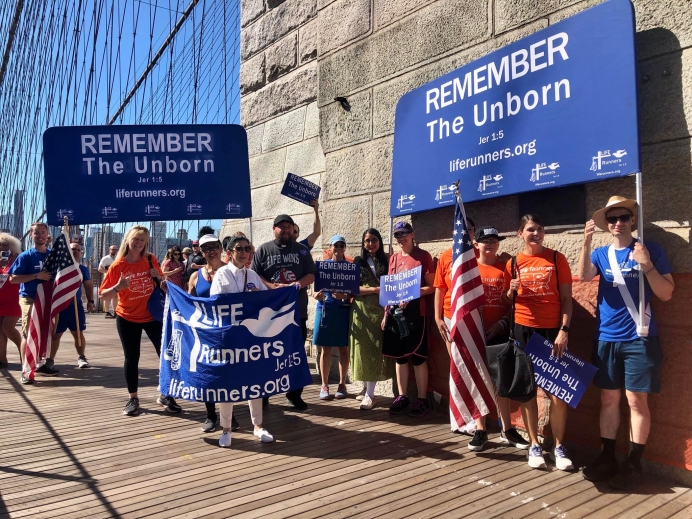 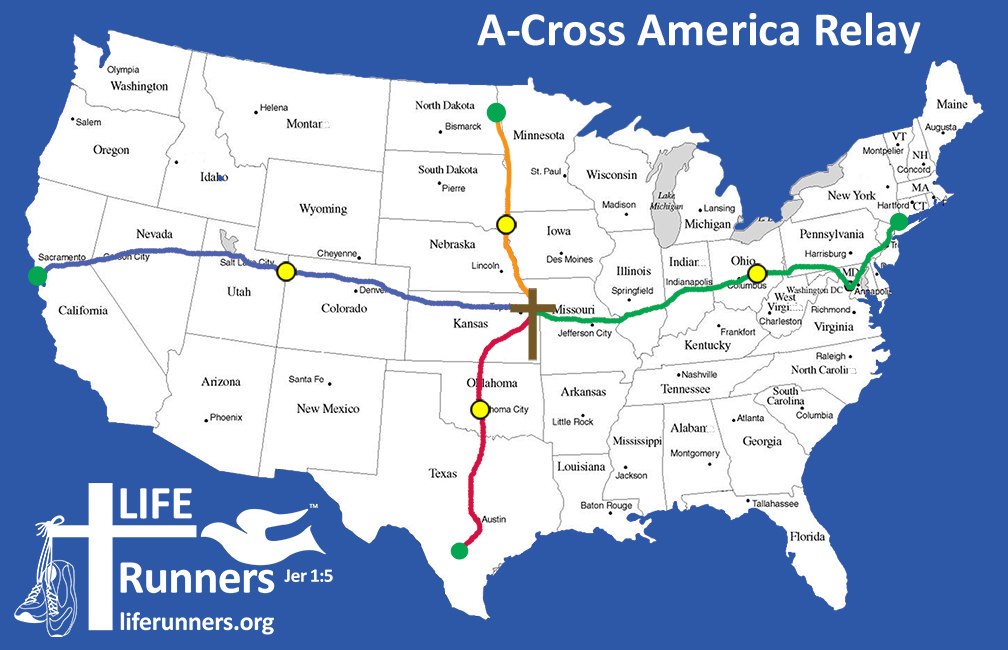 Runners proclaim a simple message, "Remember the Unborn" Jer. 1:5" on banners and t-shirts.

The LIFE Runners Relay is broken into segments of about 5K each. Teammates from around the world register to walk or run, with some of the legs starting or ending at prior or current abortion facilities.

After Mass at the Cathedral Basilica of St. James in Brooklyn, New York, LIFE runners gathered on the Brooklyn Bridge with their Remember the Unborn banner and began their run across the bridge to Manhattan, where they stopped for prayer at the infamous Margaret Sanger Planned Parenthood abortion facility.

After prayer and sidewalk counseling in front of the very busy abortion center, they returned to the Basilica for a noon Mass.

Participants run any time from July 4 through the August 7 finish line, each starting by reciting the LIFE Runners creed:

We believe in the dignity of all human life from conception to natural death.

We run as a Prayer, to defend children in the womb, so that they may be born and united with our Christian community.

We run to build Endurance, for the race is long and we must keep our eyes fixed on You Lord.

We run for Awareness, so our culture will view all human life as a reflection of Your glory Lord.

We run for Charity, to provide support for mothers and fathers tempted to abort their child, and healing support for post-abortion women, men, and families.

We run to End abortion, for Christ died so that all may live. Guard us all, born and unborn, with Your PEACE, Lord. For in You, life is victorious.

We pray and run in Your name, JESUS CHRIST. Amen.

A number of post-abortive men and women will run the relay, with members of various pro-life groups and ministries around the country also participating in their respective areas.

Castle founded LIFE Runners about 13 years ago when he met another faith-filled runner, Jeff Grabosky.

At the time, Grabosky was completing the extraordinary feat of running solo from coast-to-coast across the United States, praying as he ran.

Only the 43rd person to complete an ocean-to-ocean cross-country U.S. run, Grabosky later wrote about his four-month journey in, Running with God Across America, in which he explained how he prayed a decade of the rosary for each of the roughly 3,500 intentions he had been given.

Castle thought of the powerful witness of, "Remember the Unborn" that he aimed to share across the country through running.

“I said, ‘Jeff, what if we did this trip across America again, and we’ll get the hundred LIFE runners and we’ll just all do it together. And he said, ‘Absolutely,” Castle related.

Over the coming year, they planned a coast-to-coast route, launching the inaugural A-Cross America relay on Palm Sunday, 2013.

The relay drew a lot of attention to LIFE Runners. 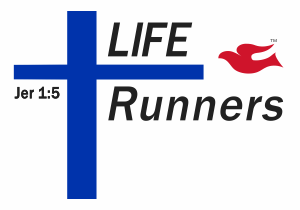 “We kind of exploded,” said Castle.

LIFE Runner membership expanded from 170 at the end of 2011 to 1,791 members by the end of 2013 after the first A-cross America Relay had been completed.

In 2015, they decided to add a north-south route across the country to make a cross, and in 2016, they allowed people to “adopt” 5K segments while running “anywhere in the world during the relay time period.”

“It’s spurring this public witness, this pro-life activism, this unity, this synergy. That’s the awesomeness of this A-Cross America Relay for pro-life,” Castle said in a report from LifeSiteNews.

“It unites everyone together with the ‘Remember the Unborn’ message,” he said. “I love how LIFE Runners has permeated throughout the pro-life movement in that capacity.”

"We are all “running” to meet mothers in need of healing to prevent abortion, racing to cross the finish line that ends abortion,” he said. “We carry our cross. ‘All In Christ for Pro-Life!’”

The witness of LIFE Runners has saved babies lives and their mothers the anguish of abortion, and probably many of these beautiful outcomes remain unknown.

One young mother was told her unborn baby had Down syndrome. The father threatened to leave unless she had an abortion. She saw a strategically placed "Remember the Unborn" yard sign placed and it prompted her to choose life.

While at her local swimming pool, a woman wearing her "Remember the Unborn" short chatted with an acquaintance who ultimately decided to join the relay. When she was handed her own shirt, she shared that she was pregnant and had been considering an abortion.

"You are on an appointment from God,” she said. “I'm not going to do that now. Thank you!"

Several babies have been saved at the infamous Carhart abortion facility in Belleview, Neb., either through LIFE Runners participants praying out front or sidewalk counseling.

The LIFE Runners relay will continue every year, Castle said, "until we cross the finish line that ends abortion."

Tweet This: "The LIFE Runners relay will continue every year, until we cross the finish line that ends abortion."